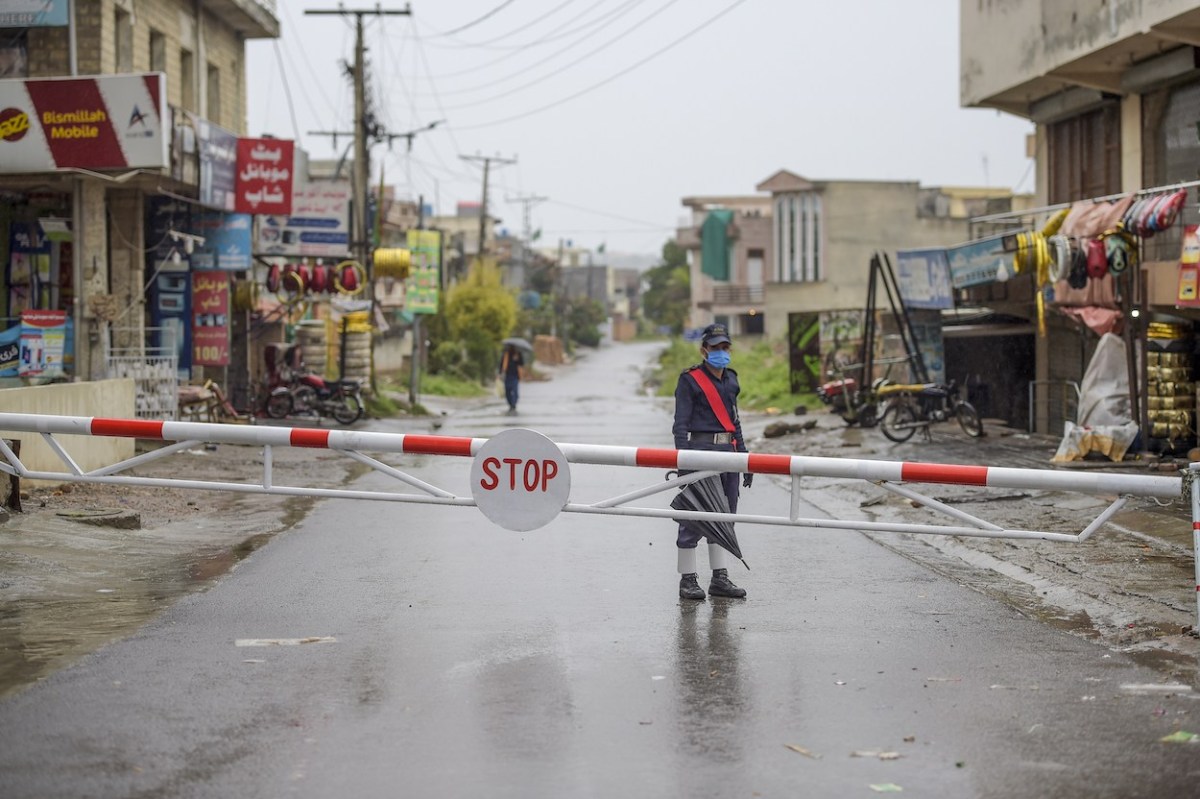 Pakistan’s COVID-19 tally has crossed the 1,000 mark with new cases emerging in Islamabad, GB, and Balochistan. Sindh remains the worst hit with most reported cases, followed by Punjab, Balochistan, AJK/GB, KP, and Islamabad.

Islamabad has begun its shutdown as well after the capital administration announced a partial lockdown in the city late Tuesday. All public transport and hospital OPDs have been suspended and shopping malls, restaurants, private offices have been shuttered as well. Public offices will operate between 10am to 4pm and the metro bus service will only operate between 8:30am to 10.00am and 3:00pm to 5:30pm.

As new cases continue to flock in, PM Imran Khan maintains his stance that a curfew-like lockdown will impact the poor the most and is possible to do without. While briefing the media on Tuesday, he announced a comprehensive multi-sectoral Rs1.2 trillion COVID-19 package that slashed petrol prices and announced stipends and relief packages for the people and businesses.

Meanwhile, the pandemic continues to shock the world. Italy’s coronavirus death toll rose by 743 in one day to 6,820. Deaths in Spain also surged by 514 in one day bringing its cumulative toll to 2,696. India announced a complete nationwide lockdown on Tuesday for 21 days as the situation aggravates in the country of 1.3 billion people.

The disease is accelerating in the US too with the country reporting third-highest number of confirmed cases globally. The WHO has already warned that the US could be the next COVID-19 epicenter.

Here are the latest updates.

Only hours after it announced its first two coronavirus recoveries, KP has reported 41 new cases.

PCB to Make Contribution in Fight Against COVID-19

The Pakistan Cricket Board today announced its cricketers and staff will play their part in the fight against COVID-19 by making contributions to the government’s emergency fund.

According to a press statement, the centrally contracted players will collectively donate PKR5million to the fund.

“In addition to the cricketers’ contribution, PCB staff up to the rank of Senior Managers will donate one day’s salary, while the General Managers and above will donate two days’ salary,” the statement read.

PIA to Continue Flights from Islamabad to Gilgit & Skardu

After directives from the Prime Minister, the Civil Aviation Authority has allowed the national carrier to resume flights to Skardu and Gilgit from Islamabad.

According to PIA spokesperson Abdullah Khan, the prime minister has exempted the routes from the nationwide domestic flight suspension (from March 26 to April 2) because the GB region is heavily dependent on aerial contact for its basic necessities and emergency situations.

The International Monetary Fund and World Bank have called for governments to put a hold on debt payments from the world’s poorest nations so they can battle the coronavirus pandemic.

The Washington-based development lenders, in a joint statement, stated:

With immediate effect—and consistent with national laws of the creditor countries—the World Bank Group and the International Monetary Fund call on all official bilateral creditors to suspend debt payments from IDA countries that request forbearance. This will help with IDA countries’ immediate liquidity needs to tackle challenges posed by the coronavirus outbreak and allow time for an assessment of the crisis impact and financing needs for each country.

Following a fatwa from Jamia Al Azhar banning congregational prayers amid the COVID-19 outbreak, President Arif Alvi has asked Pakistani religious scholars to do the same.

The president has made the request after Grand Imam Shaikh of Jamia Al Azhar and Supreme Council in Egypt issued a fatwa regarding the matter.

I am thankful to Grand Imam Shaikh of Al Azhar & Supreme Council, for responding to my personal request to provide guidance to us with regard to Farz Jamaat & Juma prayers in mosques during #CoronaVirusPakistan attack. The details of Fatwa are below for our Ulema to take action. pic.twitter.com/T8TrestjgA

Punjab health minister Dr. Yasmin Rashid has informed in a tweet that over 600 zaireen who were kept in quarantine are returning to their homes after testing negative for the virus.

They will be kept under observation, she said.

The national carrier has decided to operate 4 special flights on humanitarian grounds to transport passengers stuck in Pakistan.

According to PIA spokesperson, three flights will go to the UK while one will fly to Canada. The schedule will be as follows:

All flights will return empty. Tickets will be sold on first come first serve basis.

Khyber Pakhtunkhwa has reported two new cases, while four new cases have been confirmed in Balochistan.

FACT CHECK: BOP Branch Did Not Close Because of Coronavirus

No, this Pakistani bank branch did not close after an employee contracted coronavirushttps://t.co/fIjHmJHrFF pic.twitter.com/1vvKRnZpEF

Karachi has reported 3 new cases, taking the Sindh tally to 413. Punjab has reported 16 new cases with the provincial tally climbing to 312.

The first one was reported in Swabi where a man, who had returned from Dubai earlier this month, tested positive for COVID-19.

The other first case appeared in Swat. The patient had returned from the US a week ago.

Spain has now recorded more deaths than any country except Italy, the government says. Elsewhere, the US could become the epicenter of the coronavirus pandemic.

Only Italy now has a higher number of coronavirus deaths than Spain.

A female patient who was under treatment at Rawalpindi’s MH Hospital has reportedly passed away. The woman, identified as Capt. Retd. Shahida, was admitted to the hospital on March 21.

She belonged to Sohawa and had a travel history to the UK. Her body has been sent to her hometown. Commissioner Rawalpindi has verified the death.

The Prince of Wales has tested positive for coronavirus, Clarence House has confirmed.

The Duchess of Cornwall has also been tested but does not have the virus.

Chief Minister Khyber Pakhtunkhwa has said that 2,000 paramedic staff has been deployed in the province. He added that there are essentially two quarantine centers in KP, one at DI Khan while another is at Mangha, where a positive Coronavirus case eventually died.

CM said that 39 cases are tested positive, while more test results are awaited. CM also announced that food is going to be delivered at the doorsteps to the residents of Mangha.

WATCH: People In Bhara Kahu Being Warned to Stay Indoors as the Area Gets Sealed

It may be recalled that as many as six individuals of the tableeghi jamaat residing in Islamabad’s union council of Kot Hathial in Bhara Kahu were tested positive for COVID-19 on Tuesday.

The capital administration of Tuesday had ordered the UC Kot Hathial to be placed under quarantine to contain the virus’ spread. Earlier, another member of the 13-member jamaat, a Kyrgyz, was tested positive which followed the closure of two mosques in the area where the team had resided in and prayed.

The first shipment of COVID-19 kits from China has arrived at Karachi International Airport.

China has donated 1 million masks (including N95 masks), 50,000 testing kits, and other protective gear for medics.

Another 159 Pilgrims to be Released from Sukkur Quarantine Today

Another 159 zaireen, who were kept in Sukkur quarantine after returning from Iran, will be released today after testing negative for COVID-19.

Over 400 zaireen were also released on Tuesday after being declared healthy and testing negative for the virus during their time in the quarantine.

PTA Directs Operators to Not Charge Users for Calls to 1166

All calls being made to the Ministry of National Health Services helpline 1166 have been declared free.

PTA has issued directions to all operators for not charging calls to 1166.

Islamabad and Gilgit Baltistan have reported one new coronavirus case each.

Balochistan has reported addition of 5 new cases, all in pilgrims returning from the Pak-Iran border of Taftan.

Daraz has announced suspension of its Pakistan Day Sale and has stopped deliveries ‘until further notice’.

“Until we have more clarity, we have also reduced the assortment available through Daraz,” an email to a customer read.

The company, however, will continue the sale of essential items such as health & cleaning products and household groceries with ‘extended delivery times’. 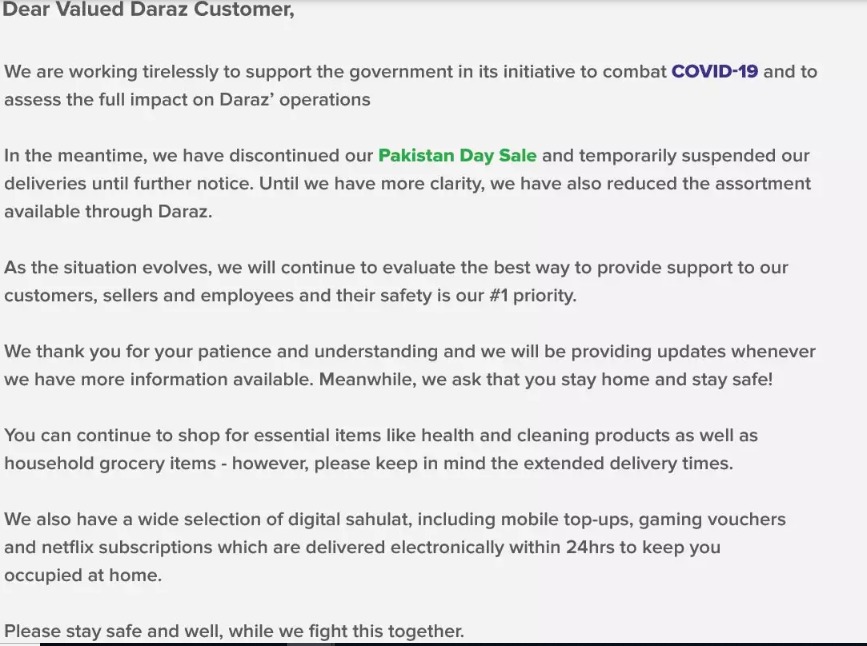 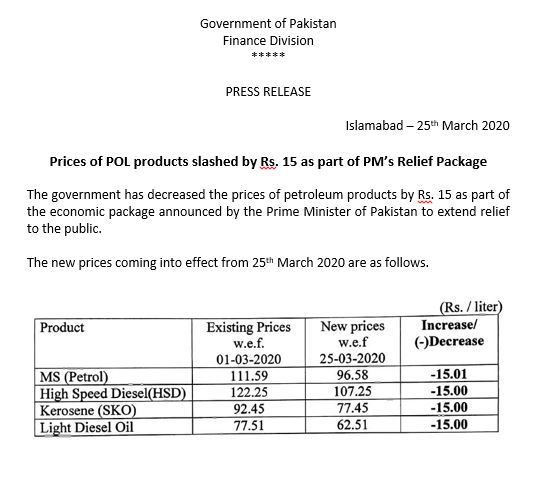 31 new coronavirus cases have been confirmed in Punjab, taking the provincial tally to 296. CM Usman Buzdar shared the new numbers in a tweet with complete breakdown.

I can confirm that currently there are 296 positive cases of #COVID19 in Punjab.
65 are in Lahore, 20 in Gujrat, Gujranwala 8, Jhelum 16, Rawalpindi 2, Multan 3, Faisalabad 2, Mandibahuddin 1, Narowal 1, RYK 1, Sargodha 1 and DGK quarantine have 176 cases. #StayAtHomeSaveLives

The government on Tuesday announced the suspension of all domestic flight operations with the exception of cargo and special flights till April 2.

The move comes as part of the government’s efforts to curb the spread of coronavirus.

A statement from the Civil Aviation Authority said that the government had “decided to suspend all types of domestic scheduled/non-scheduled, chartered and private aircraft passenger flight operations with effect from Thursday, March 26, at 6:00am up to April 02, 2020.”

As announced by the capital administration, a lockdown has begun in Islamabad.