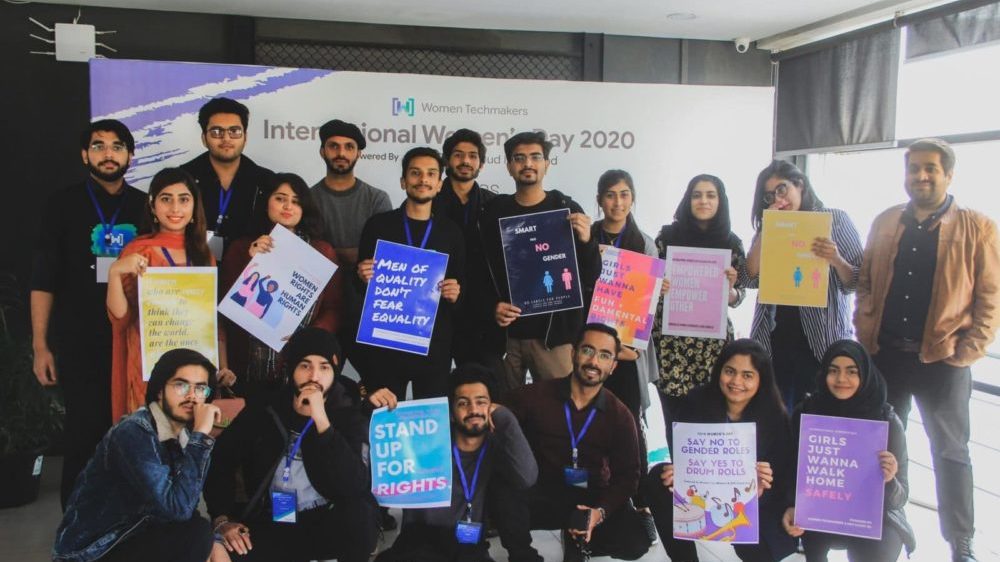 With an atmosphere of excitement, the IWD Women Techmakers 2020 event powered by GDG Cloud Islamabad and Women Techmakers Islamabad was held at the National Incubation Center to honor the achievements of women in technology and many other sectors, with a lineup of speakers, panel discussions and workshops to bring forward a powerful message of inclusivity and gender equality. 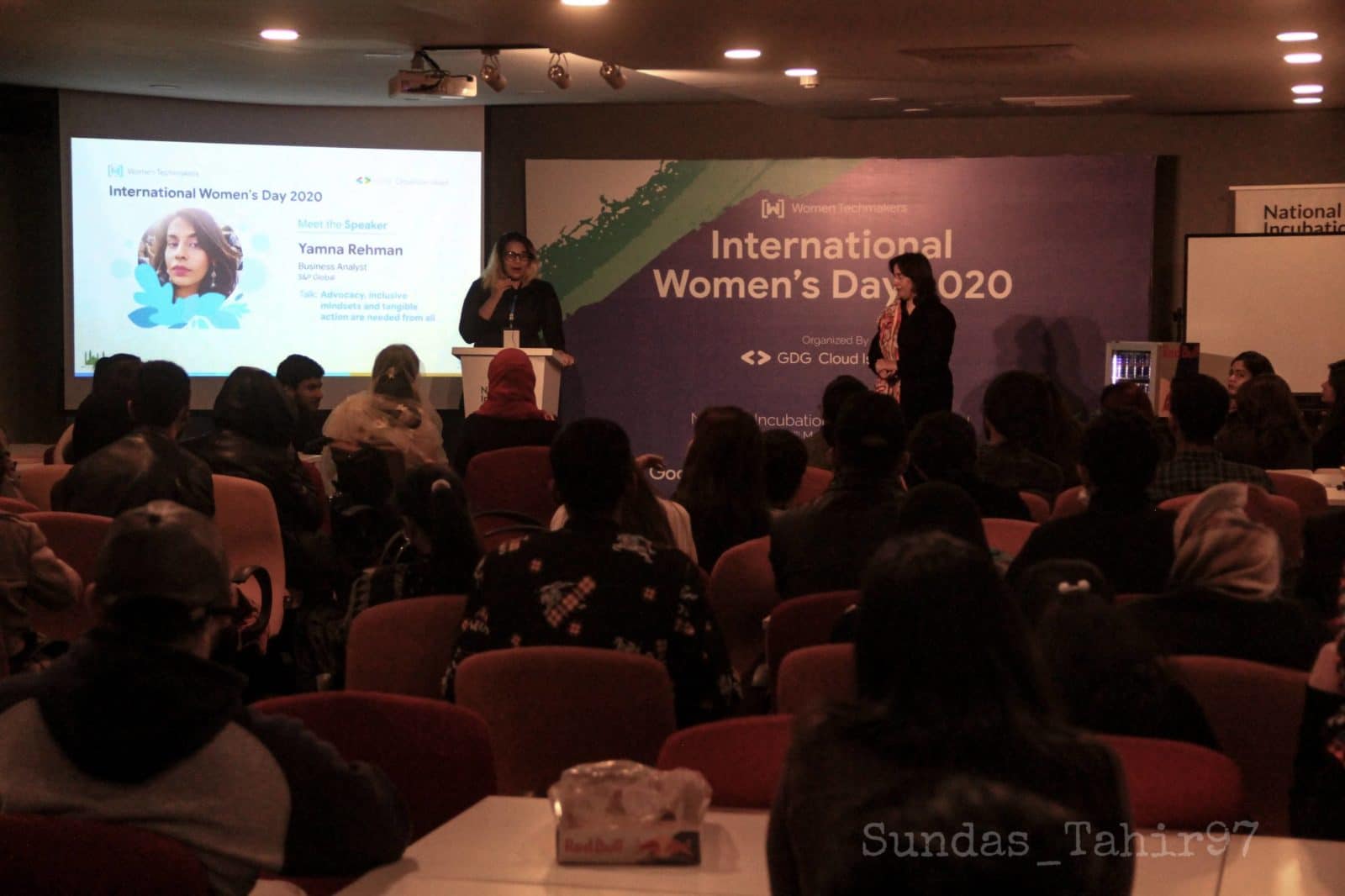 Google Developers Group Cloud Islamabad is a local community enabling passionate developers and enthusiasts to connect with each other and learn about the latest Google technologies. The event was attended by over two hundred people consisting of students and professionals, with over seventy-five percent of the attendance being female. 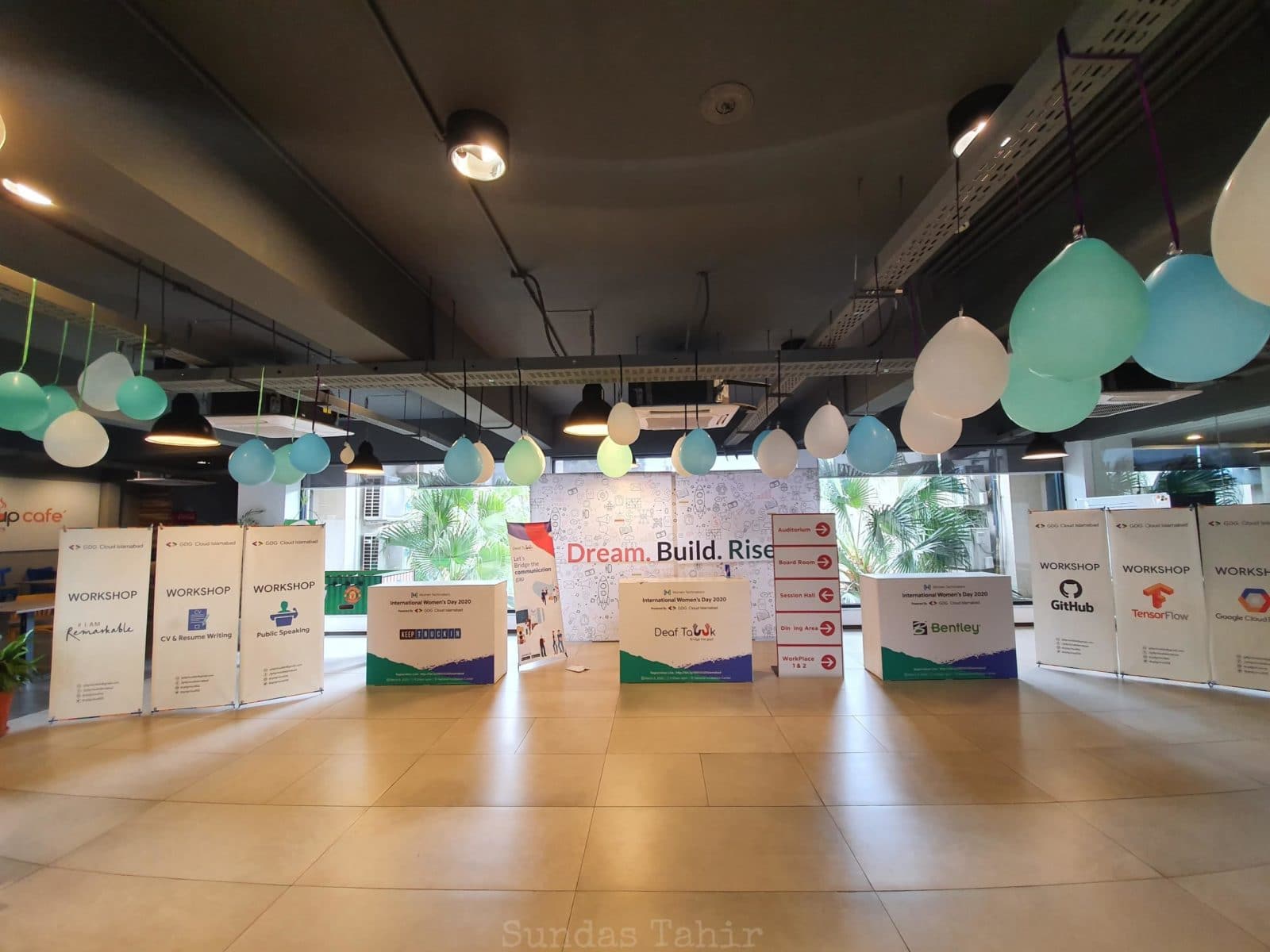 Another notable partner was DeafTawk who helped make the event more accessible by providing sign language interpretation for all the speakers, panelists and workshops and bringing an ever-welcome group of deaf people to the event.

An enthusiastic address from GDG Cloud Islamabad Manager and Women Techmakers Ambassador Irum Zahra formally inaugurated the event, where she spoke about the work GDG Cloud Islamabad has done in its year-long lifespan and the importance of this event serving as a forum for learning and empowerment for many.

Following that, Aadil Jalil from Sedenius Technologies gave inaugural remarks about his company’s expertise with major automobile companies like Audi and BMW, and how they are striving to recruit more women in the fields of coding and machine learning.

After that, a series of ‘Lightning Talks’ by women impact makers proceeded to captivate the audience, with their inspirational stories striking a chord with many. 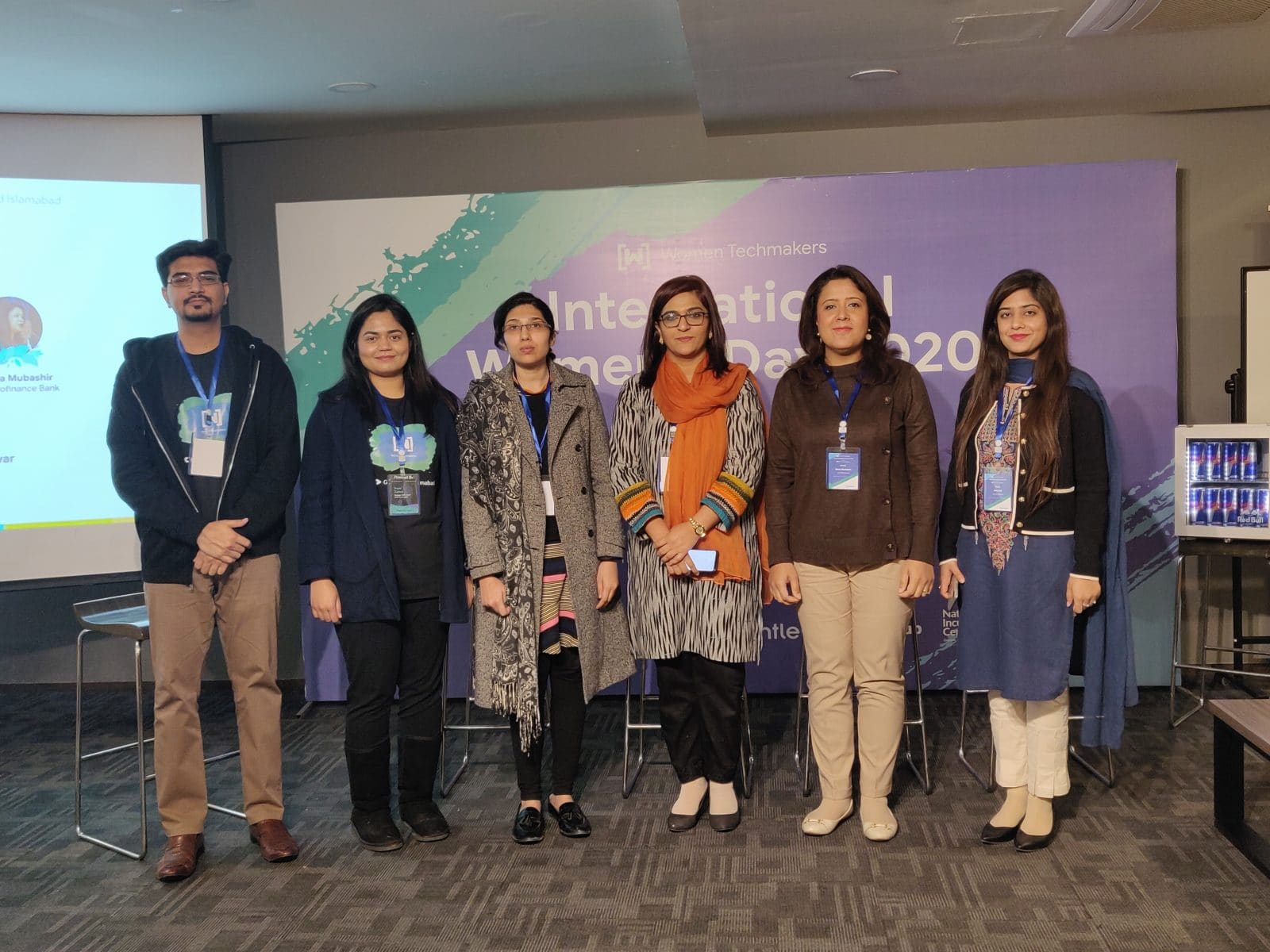 Mahrukh Asif shared her story of running ‘Fitnique’, an intensive fitness training business and her healthy diet business ‘Buff Bakes’, both specifically geared towards women. Samar Khan, being the first person in the world to ride on a bicycle on the Biafo Glacier in Skardu, spoke about her world-renowned experiences as a female adventure athlete in Pakistan, and how her startup, Samar Camp, empowers more women in Pakistan to pursue careers in athletics.

Zia S. Hasan, co-founder, and director of NShield Solutions spoke about embracing the role of women in the 4th Industrial Revolution and pushing them towards STEM subjects as well. And finally, Yamna Rehman from S&P Global informed everyone about the lack of women in leadership and workforce positions and how this can be fixed with self-promotion and discarding archaic stereotypes.

However, the story that stole the show with its example of triumph over struggle was that of Romela Hameed’s, a survivor of the 2005 earthquake who fought to rebuild herself personally and professionally, and with her startup, ‘SmT’ exemplified the reality that disability is never a hindrance, but just a different lifestyle. 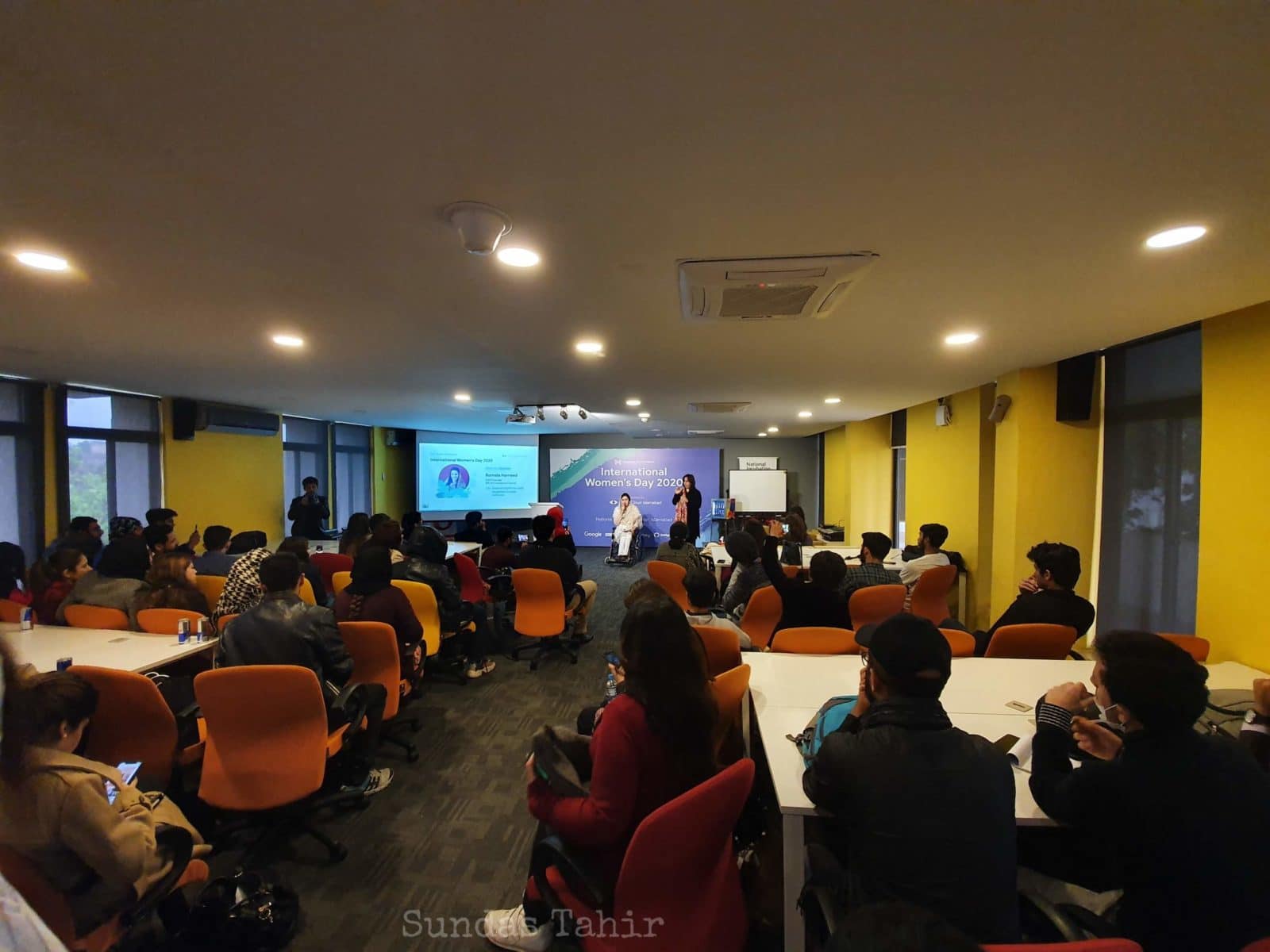 A series of panel discussions were also held to present various perspectives and opinions and incite a conducive discussion.

One of these was ‘Women at Work’, consisting of working women from varying sectors, namely Hina Adil from Nestle, Founder of Inspire Mill Sidra Jalil, Chief HR Officer at U Microfinance Bank Amra Mubashir, and radio host at Radio Pakistan Syeda Yumna Hasany. The panelists highlighted the laurels of an empowered and female-friendly workforce and their fights against systemic bias and gender discrimination.

Another was ‘Men are Allies’, with its panelists being Talha Bin Afzal from [email protected] and Mian Talha Nasruddin from Jazz. Points were raised on how management policies can be enacted to encourage inclusivity and negate existing stereotypes regarding working women.

A series of invigorating technical workshops were also conducted for the attendees, with the participants brushing up on their skills in technologies like Firebase, Github, Machine Learning through Tensorflow and the Google Cloud platform with instructors like Machine Learning Google Developer Expert Imran Us Aslam, Ali Ayub Khan from Jazz, CEO of Testify Mariam Aslam, and SEM Specialist at Code Informatics and co-founder of Testify Fahad Ali respectively.

The event was concluded with a hi-tea and networking session where students, graduates and experts got the opportunity to connect with each other, followed by a cake-cutting ceremony by the organizing team, with the cake provided by 4O1 Bakers, that provided a fitting end to an event celebrating gender equality and women rights, and bringing worthy voices into the limelight.