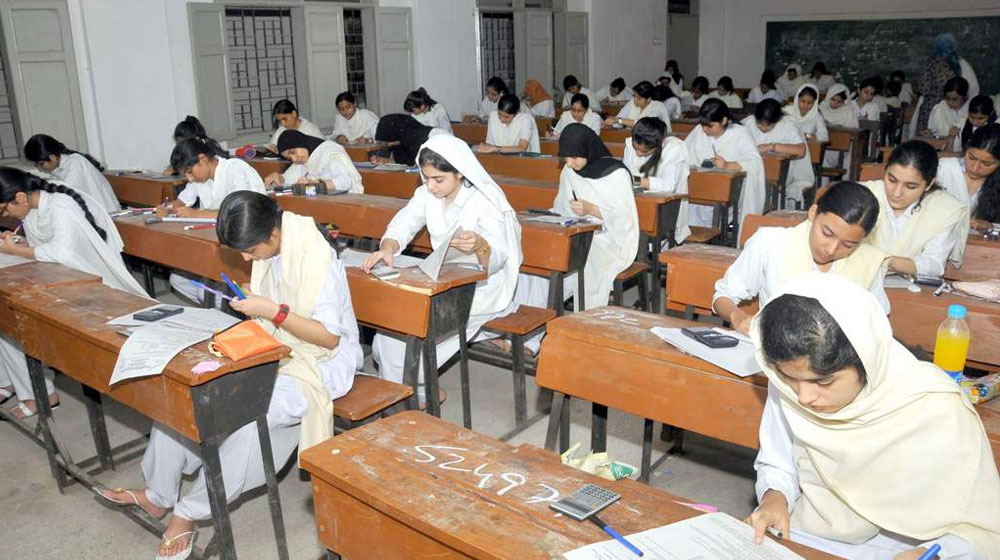 The Federal Board of Intermediate and Secondary Education (FBISE) on Monday announced the results of Secondary school Certificate (SSC) Part-II Annual Exams 2020 under the promotion policy of federal government formulated in wake of the novel coronavirus.

This year, SSC Annual Examination 2020 could not be conducted completely due to the coronavirus while the results had been prepared under the ‘Promotion Policy of Federal Government’.

Overall the girls remained dominant and clinched top slots in 2020 SSC Exams, it was announced in a ceremony held at FBISE which was attended by the Parliamentary Secretary for Federal Education and Professional Training Wajiha Akram, Chairman FBISE, Rao Atiq Ahmad, position holder students, parents, and teachers.

In Science Group, the first position was shared by Khunsha Nisha Yaqoob Malik from Islamabad College for Girls, F-6/2 Islamabad and Menahil Iman from Army Public School and College for Girls Range Road Westridge-III Rawalpindi Cantt with 1097 marks, while the second position was also clinched jointly by the two students including, Faheem Abbas from Garrison Cadet College Kohat and Zartasha Abbasi from Garrison academy Kharian Cantt with 1096 marks.

The third position was shared among eleven students with 1095 marks including:

Speaking on the occasion, Parliamentary Secretary Wajiha Akram congratulated the students, parents and teachers for achieving the high success in SSC exams and wished them good luck in the future.

She said that the announcement of results, conduction of exams and opening of schools were major challenges for the government in the wake of the pandemic.

Lauding the Madrassah students for achieving positions in SSC exams, Wajiha said that they could get a professional education in the future. She said that the new curriculum will be introduced next year.

Chairman FBISE Rao Atiq Ahmad in his welcoming address said the result was available on the FBISE website, while the same has already been conveyed through SMS to all the candidates. The result cards of the students shall be dispatched to them at their addresses or respective institutions, he added.

He further said that the students have been awarded marks in 10th class as per their performance in the 9th exams, adding that 30 percent extra marks had also been given to the students.