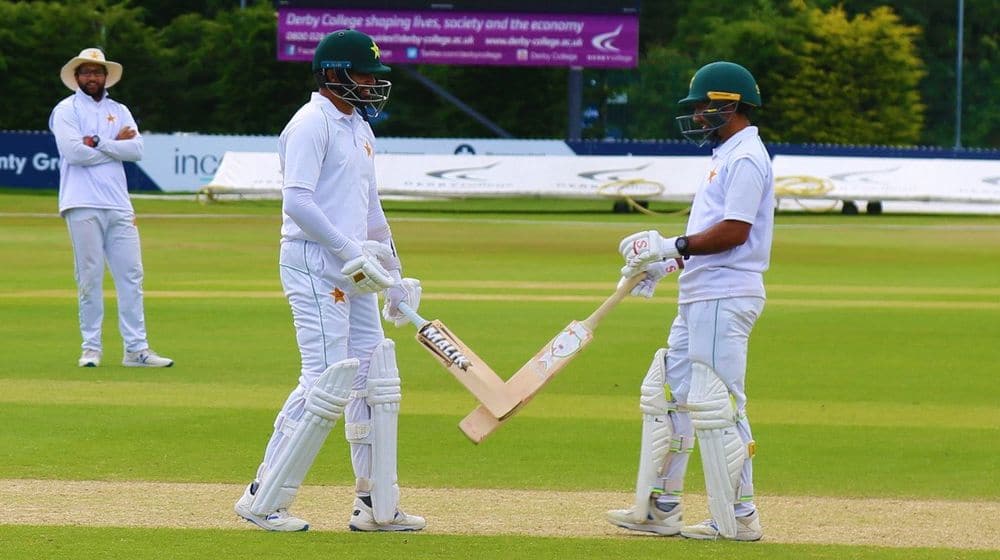 A captain’s innings from Azhar Ali and half-centuries from Asad Shafiq and Fakhar Zaman led Team Green to a six-wicket win over Team White at the Incora County Ground, Derby on Monday.

Chasing 352 to win the match, Azhar Ali XI lost their opener, Mohammad Hafeez, for two in the first over.

Later, Azhar Ali and Fakhar Zaman got together and constructed a 159-run partnership for the second-wicket. Azhar scored 120 runs from 225 balls, hitting 10 fours before he was retired out, while Fakhar was dismissed on 99. His 128 ball innings included 10 fours and 6 sixes.

A captain’s innings from @AzharAli_ led Team Green to a six-wicket win over Team White.

After the departure of Fakhar, Asad Shafiq joined in and contributed a 129-run partnership for the third wicket with Azhar. Asad was retired out as well after contributing a valuable 67 runs from 95 balls, laced with 9 fours and 2 sixes.

Iftikhar Ahmed (28) and Sarfaraz Ahmed (19) remained unbeaten as Team Green chased down the target in the 89th over.

Earlier, resuming their second innings on the overnight score of 245 for five in 77 overs, Team White declared their innings at 284 for five in 83.4 overs.

Mohammad Rizwan top-scored with an unbeaten 100 off 159 balls, hitting 14 fours. Shadab Khan coming to bat at number seven chipped in with a 62-ball 39 with 4 fours and 2 sixes. The duo added a valuable unbroken 109-run partnership for the sixth wicket.

Mohammad Rizwan 100 not out
Shadab Khan 39 not out

The two teams will now feature in the second intra-squad four-day game from 24 to 27 July at the same venue.