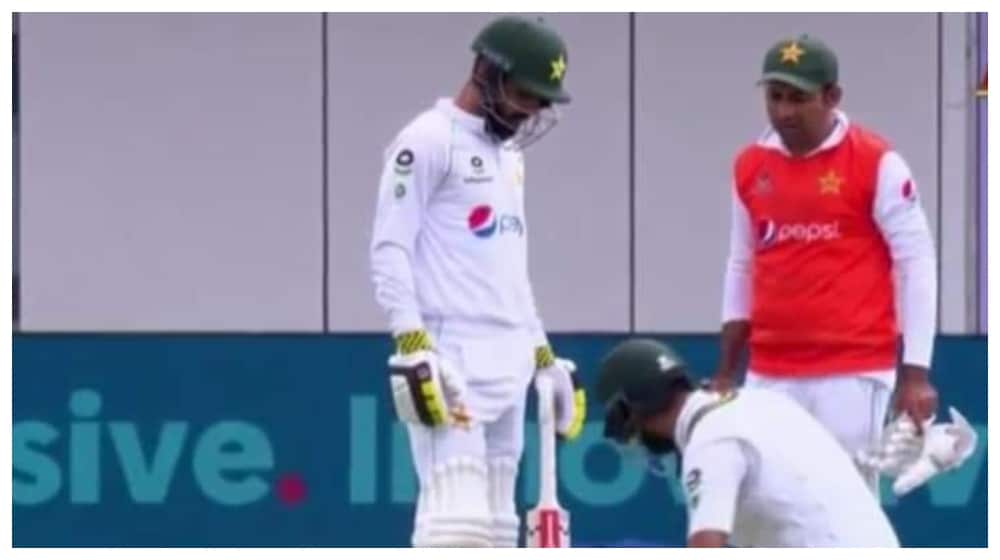 Cricket has seen some of the greatest players take water for the batsmen in the middle when they were not in the playing XI. Ricky Ponting, Virat Kohli, Graeme Smith, and Sir Donald Bradman have all done it, however, a senior journalist, Abdul Majid Bhatti, didn’t like the fact that Sarfaraz Ahmed was asked to do that.

Sarfaraz Ahmed is now in the elite company despite the fact that he doesn’t boast the same numbers as the legends mentioned above. Bringing water for a player on the crease by a former captain is considered a disgrace in a country like Pakistan when legends have been doing it in the past without anyone questioning.

Sarfaraz vs Rizwan: No Pressure on Rizwan Due to Former Captain

Here’s what the senior journalist wrote in his post:

⁦@SarfarazA_54⁩ is Pakistan ex captain is bringing shoes and water for Shan Masood. Team management must maintained protocol for the senior players.This is
Really unfair, doesn’t show the team spirit. They have so many juniors in the 16 member team. ⁦@TheRealPCB⁩ pic.twitter.com/ATe4CUGjcF

To further explain why bringing water is not a bad thing, Australian Prime Minister, Scott Morrison, also acted as a water boy in a practice match between Prime Minister’s XI and Sri Lanka in 2019.

The internet, however, is divided with some saying the management should not have done it, while others are quoting examples from the past to justify the move.

Sarfaraz is now the company of Bradman, Kohli and Ponting. https://t.co/eYH12xEeFK pic.twitter.com/XRfGRhLM5q

For those people who are criticizing on @TheRealPCBMedia to appoint Sarfaraz Ahmad today as helper of team, this picture shows to become water boy for your mates is not cheap work it's service, and after watch this i think critisizers need to shut their mouth, #PAKvENG pic.twitter.com/iPKLCWVg5V

Cricket is a gentlemen's game and this is a gentle act in this beautiful sport. This is not disrespect. Period! 2/2

This is embarassing. Dhoni and Kohli both have carried drinks for team's other team members. And it's fine. There's nothing wrong or derogatory in it. Nor is it that Sarfaraz had to do that. Smh https://t.co/jqV6SwA7np

I dont think its a big deal in any sport. We have seen in past as well that senior players go out with water bottles to advise the players in field and I don’t think someone forced @SarfarazA_54 to do that. Lets not make it an issue and i am sure Sarfaraz is beyond all this. https://t.co/N4Uko0I2tJ

"Things like Sarfaraz Ahmed bringing water in ground can only be discussed in Pakistan. This is not about giving respect to someone but a sign of good team. Sarfaraz Ahmed is a very good being and respectable."#PakvsEng #SarfarazAhmed pic.twitter.com/y6xCySL0qN

Some people are trying to make a issue out of nothing. I must say stop spreading hatred just to get viewership. All of them are worldcup winners & legends served thr countries lot more thn Sarfaraz. But they had no problem in becoming a 12th man. Stop acting like it’s blasphemy pic.twitter.com/hf8fXgN6Xz

Really makes me feel sad that Sarfaraz Ahmed is actually the one serving drinks and not any junior player. Like man really brought us The Champions trophy. Ive never seen Shahid Afridi being the 12th man ever.

Sarfaraz has set a great precedent.

This shows how humble and down-to-earth Sarfaraz is. Many of our stars would have ego issues but Sarfaraz has set a very good example for everyone in Pakistan that serving your colleagues doesn't devalue you. https://t.co/JblR6sIQxH