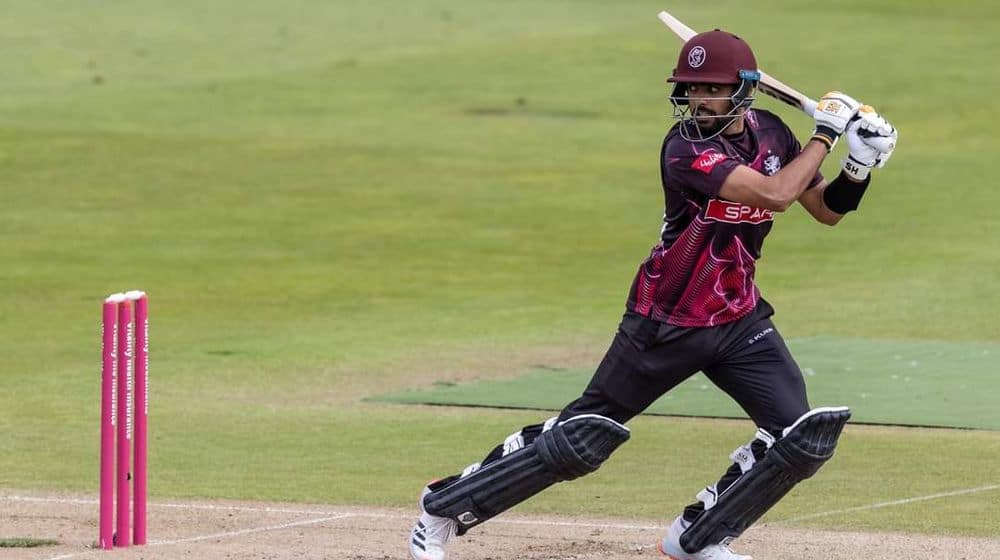 Babar Azam has returned to Somerset to represent the county cricket club in T20 Blast for the remainder of games. The 25-year-old started off in style as he slammed a solid 42 from 35 balls at the top, adding 90 for the first wicket with Steven Davies.

Babar’s innings included 4 fours and a six and went at a strike rate of 120 while Davies scored 60 from 35 and was later adjudged the man of the match for his blistering strokeplay.

Somerset posted a challenging 229/8 in their 20 overs thanks to the batting efforts of openers followed by cameos from the middle and lower-order batsmen. The opposition, Worcestershire, failed to get over the line despite coming within a touching distance of a win as they lost by 16 runs.

As opposed to last year, Babar’s shirt had a logo of the sponsor, Tribute, which is an alcohol brand. It has already been clarified that it was an error not to remove the logo from Babar’s kit, however, a number of social media users and sections of media have been bashing Pakistan’s limited-overs captain for donning the shirt.

Babar’s shirt will not have the same logo in the coming matches, it has been confirmed.

The sponsors logo for a brand of alcohol on Babar Azam's Somerset shirt was left on in error. Somerset will be removing the logo before their next match in the T20 Blast #Cricket #VitalityBlast pic.twitter.com/yEQO9Y4EPd

The controversy that they were trying to spark has already died out and it’s good to see Babar continuing to perform with the bat in English conditions. The star batsman was the leading run-scorer in the previous year’s Blast edition with 578 runs from 13 innings at an average of 52.54.