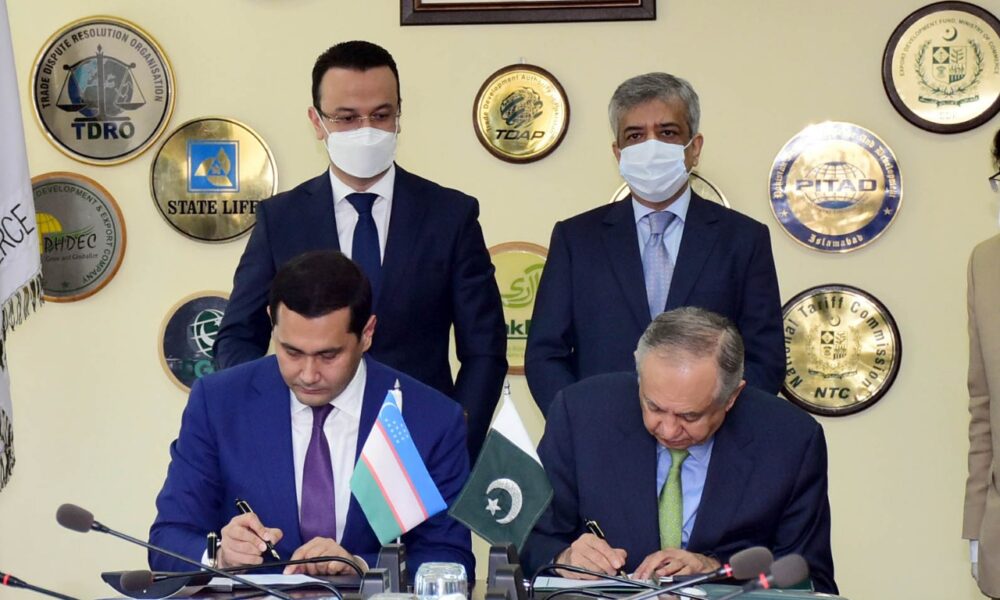 Pakistan and Uzbekistan have signed a Memorandum of Understanding (MoU) for the establishment of a Joint Working Group on Trade and & Economic Affairs for trade enhancement, promotion of intergovernmental projects in different sectors, and improvement of connectivity.

The pact was signed by the Prime Minister’s Advisor on Commerce and Investment, Abdul Razak Dawood, and the visiting Deputy Prime Minister and Minister for Investments & Foreign Trade Sardor Umurzakov.

In the discussions held with the Advisor, both sides agreed to start negotiations for a bilateral Early Harvest Plan, proceeding to Preferential Trade Agreement to provide increased market access to each other’s products.

It was also agreed to have Mutual Recognition Agreements (MRAs) for harmonization of standards and sanitary and phytosanitary measures. Both sides agreed to arrange a business forum for the private sector of their countries.

During the bilateral discussion, Pakistan and Uzbekistan resolved to optimally utilize trade & investment opportunities and work expeditiously to achieve the shared goal of strengthening political and commercial ties.

The nine-member delegation comprising First Deputy Foreign Affairs and Deputy Ministers of Investment & Foreign Trade, Transport, and senior officials of the Ministry of Investments & Foreign Trade called on the Prime Minister and the Chief of Army Staff.

The delegation also held meetings with the Ministers for Industries & Production and Maritime Affairs to actualize existing investment opportunities in the fields of textile, agriculture, pharmaceuticals, and tourism. Both sides pledged to endeavor to work towards improved connectivity through land borders and shipping. Uzbekistan is particularly interested in using seaports of Pakistan for shipment of imports and exports.