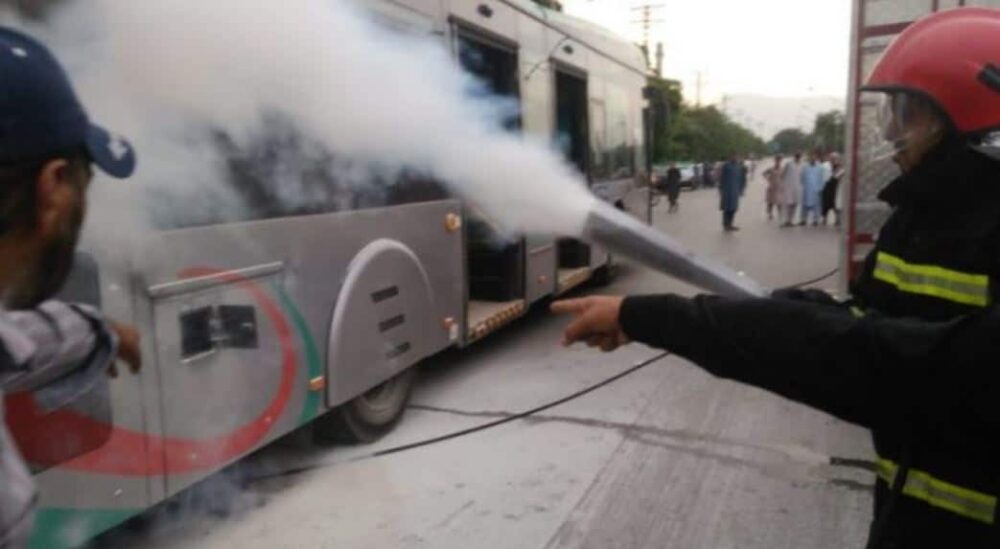 Peshawar Bus Rapid Transit (BRT) service had to be placed on hold yesterday after one of the buses from the fleet caught fire for the 4th time. Spokesman and a representative of the BRT service, Umar Khan, told the media personnel that it was the rear cabin of the bus that caught fire, as it was passing through the Hayatabad route.

Khan reported that all the passengers were taken to safety in a prompt manner and that the fire brigade arrived at the scene shortly after the incident to contain the spread of the flames. He also highlighted that the entire fleet of buses will go through a thorough inspection once again by the manufacturer to mitigate any such unfortunate event going forward.

Reportedly, this has been the 4th fire incident that’s taken place within a month’s time. In the last incident that took place on August 26, 2020, the fire erupted on the roof of the bus and was reportedly contained in short order. Details are not yet available as to whether it’s the same bus that’s been catching fire over and over again or if the problem persists in the entire fleet.

Khan did state, however, that the manufacturer will assess the situation in a thorough fashion and that the service will be resumed once the buses have been rid of all hazardous faults.

The BRT service was inaugurated on the 14th of August, 2020, by Prime Minister Imran Khan himself, who dubbed this new facility as, “the highest-level metro project of the country”. A fleet of 128 buses runs across the main route in Peshawar, which spans 27.5 kilometers between Chamkani and Hayatabad, and has 31 stations in between.