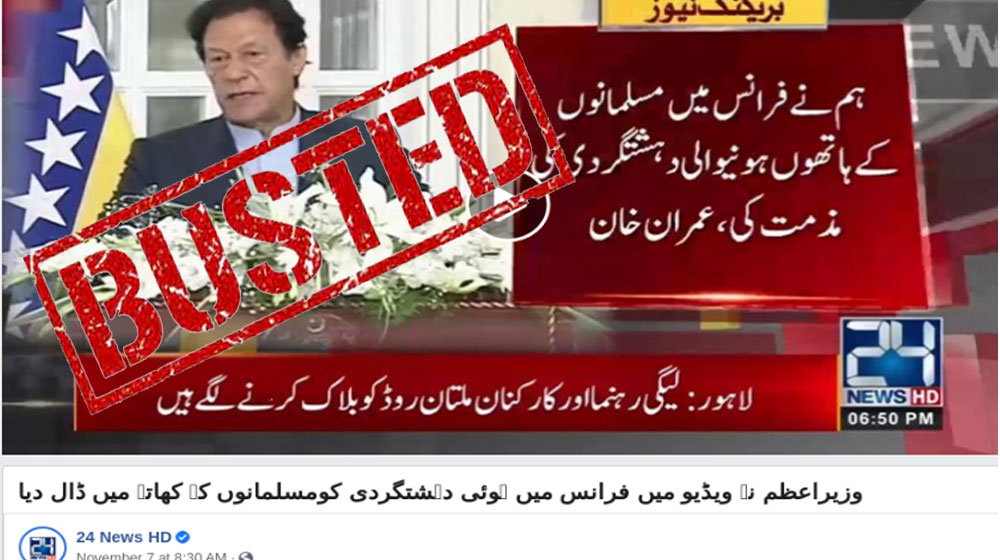 Last week, a video of Prime Minister (PM) Imran Khan in which he allegedly blamed Muslims for the terror attacks in France went viral.

On 8 November, a local news channel broadcast the video clip with the two news presenters saying: “A video of Prime Minister Imran Khan has gone viral on social media, in which he attributes the terrorism in France to Muslims. The video is of a joint press conference with the President of Bosnia on 4 November, in which Prime Minister Imran Khan says that they both condemn terrorism that has been carried out by Muslims in France”.

The clip was later shared on the channel’s Facebook page and Twitter handles with the caption: “Prime Minister Imran Khan blames French terror attacks on Muslims.”

Misbah Highly Impressed With These Spinners in Domestic Circuit

The channel’s claim is misleading because the clip includes a short and edited extract of Khan’s speech. The key phrases have been cut and joined together to present a specific angle, altering the context of his speech.

The PM’s joint press conference with the president of Bosnia in which he condemned the French President, Emmanuel Macron’s hateful comments, the republication of blasphemous caricatures, and terrorism in the name of religion took place on 4 November.

However, the doctored video showed Khan allegedly condemning French Muslims for the terror attacks in the European country.

In the original speech, the PM said: “We also discussed what is happening in France. Both of us condemned the terrorist acts by Muslims in France. Like all countries would condemn them. But at the same time, we felt that for inter-religious harmony, it is important that freedom of speech is not used as an instrument to hurt the feelings of any religious community”.

He continued that any insult, ridicule, and mocking of the Prophet Muhammad (SAW) causes the greatest pain to the Muslim community.

“And European powers, western countries must understand you cannot use freedom of speech as a weapon to cause Muslims pain by insulting the Prophet,” he added.

Here is the full version of the speech posted by another Pakistani channel GNN.