The PKR-USD parity saw a volatile week in the interbank market.

In the interbank market today, the rupee weakened by 0.19 paisas to 159.46 versus the greenback, falling by 0.12 percent during the session, whereas it had closed at 159.26 on Thursday.

According to Capital Stake, the Rupee has so far gained 0.50 percent or 0.79 paisas against the US Dollar during November. During the current week, the Rupee fought hard and appreciated by 0.79 percent or PKR 1.26 against the greenback. This is a recovery of Rs. 8.97 per USD from its 52 week low of 168.4353 per USD, which was seen on August 26. 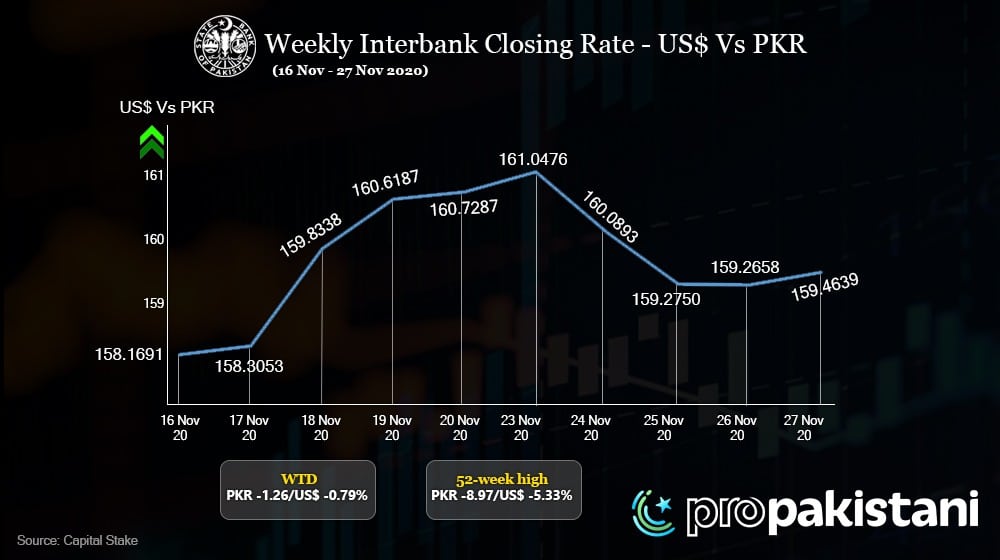 Pakistani Rupee Maintains Position After Sharp Recovery Against the US Dollar

Comparing to the beginning of the year, the US Dollar is stronger by 2.98 percent against the Rupee.

Oscillation around Rs. 160sh to continue. FX reserves are strengthening day by day. The second lockdown would further reduce demand for USD. PKR to remain firm while SBP reserves to improve.

The increase in the foreign exchange reserves is strengthening the local currency against the greenback. According to the data released by the State Bank of Pakistan (SBP), the foreign currency reserves currently held by the SBP on November 20 were recorded at $13.415 billion, registering an increase of $484 million as compared with $12.931 billion.

Foreign exchange inflows continued to maintain a positive trend in the last few weeks. The government not only received loans from various agencies, but inflows of foreign exchange also came from the Roshan Digital Account, wherein substantial value of investments were received from expatriate Pakistanis.

The smooth supply of USD from Remittances, Roshan Digital Account, and other measures by the State Bank of Pakistan (SBP) has kept the overall exchange rate from dropping too low, too quickly.

The demand for the Dollar is projected to remain controlled now, with no foreseeable major hike as per the payment scheduled by the government and the importers.