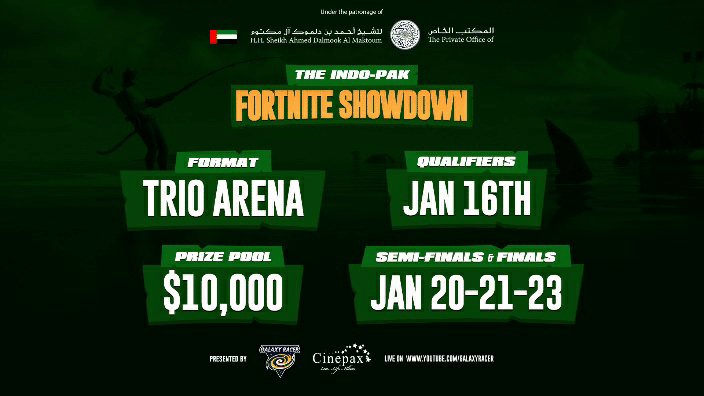 The video game industry has evolved drastically since online gaming became more commonplace and now it is a massive $159 Billion industry. The advent of social media, the rising popularity of streaming platforms such as Twitch, Mixer, and YouTube coupled with a rapidly growing player and fan base has helped the video game industry evolve into a multi-billion power-house with fans, users, consumers, and followers all over the world.

With the release of popular Battle Royale Shooters and Multiplayer games such as Fortnite, PUBG, Apex Legends, Counter Strike, DOTA, League of Legends, etc. the dynamics of competitive gaming have changed with streaming and eSports at the forefront.

Streaming and eSports have dramatically changed the gaming landscape. Millions of viewers tune in to watch their favorite players play their favorite games against one another in a competitive setting. Pakistan has experienced a significant rise in video game engagement and consumption. The recent Covid-19 lockdowns also played a huge role here and the gaming industry is one that experienced a boom globally.

More games are now being played by Pakistani gamers both casually and competitively. Newzoo reported that 55% of the consumers of this $159.3 Billion industry come from the Asia-Pacific region, which continues to boast the fastest growth of video games. However, due to limited local opportunities, players from Pakistan and India often get overlooked or miss out on competing on the international stage more frequently.

This is why Cinepax couldn’t be more excited to partner up with Galaxy Racer Sport, one of the leading eSports brands in the world and the biggest eSports names in the UAE, to present the Indo-Pak Fortnite Gaming Tournament exclusively for Indian and Pakistani players. The tournament will proceed under the patronage of His Highness Sheikh Ahmed Dalmook Juma Al Maktoum.

The tournament kicks off on the 16th of January 2021 where Indians and Pakistanis from all over the world can take part in this larger than a life gaming experience. The players of this tournament will be playing Fortnite, an extremely popular multiplayer game, which drew in 125 Million players in 2019.

The prize pool for this tournament is $10,000, which will be the biggest prize pool in the history of any Pakistani E-sports tournament. The casters and commentators for this exciting event include Alvi from Galaxy Racer who is also one of the top-ranked Fortnite players from Pakistan, while ZingaSupreme and Ducky Bhai will also appear as guest commentators.

Refer to the image below for the registration process: 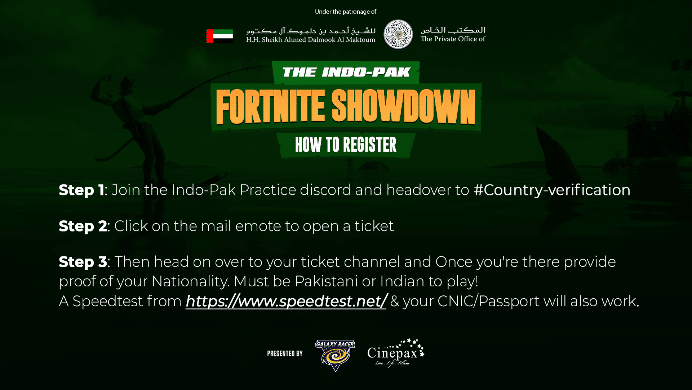 This tournament will not only bring together the best players of this region but will also give local players a better chance to win such substantial prize money.

Arif BaigMohamed Chairman of Cinepax stated, “The gaming industry in Pakistan has flourished in the past few years in such a way that now in 2021, we are finally hosting the biggest eSports gaming tournament of the Indo-Pak region. We stand at the pinnacle of starting a gaming revolution where the youth of the country will change the path.”

“My team and I are extremely proud to be a part of this tournament and we wish all the participants the best of luck and hoping to keep up with such initiatives in the future,” he added.

Galaxy Racer CEO Paul Roy added, “In an effort to support and nurture the eSport ecosystem in Pakistan, we are proud to have launched the Indo-Pak Fortnite event with a massive 10,000 USD Prize Pool. Considered the largest independent Fortnite Prize Pool in the Middle East and Southeast Asian Region, this event is open for Indian & Pakistani nationals who wish to compete.”

“This type of Prize Pool will help unknown talented players expand on their existing gaming setups, overall following on social media and act as a major stepping stone in their competitive careers. None of this would be possible without the support of His Highness Sheikh Ahmed Dalmook Juma Al Maktoum from UAE and the team behind Cinepax in Pakistan,” he added.

This is gearing up to be a tournament unlike any we’ve seen in either country and will definitely be a huge success among casual and competitive gamers, viewers, and fans of this booming global industry.