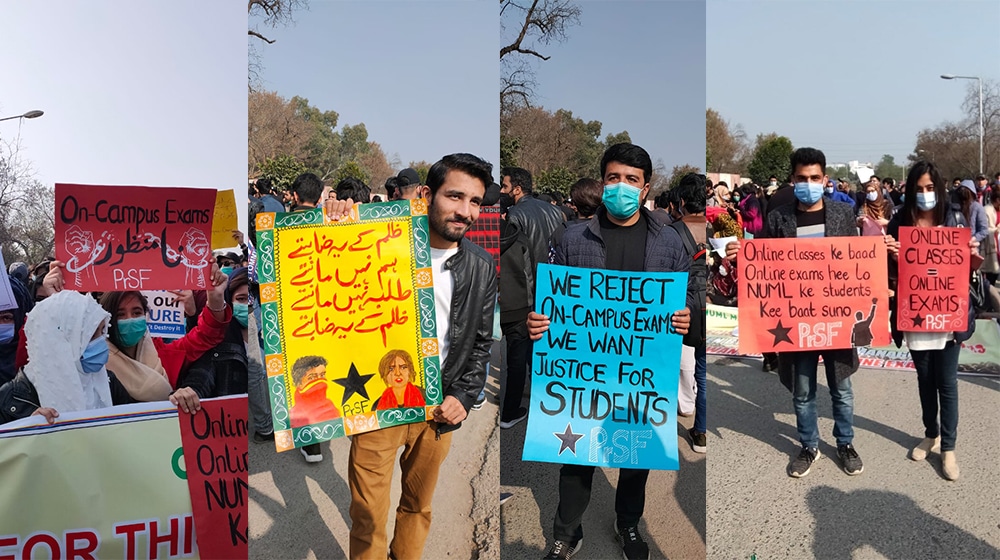 Students of the National University of Modern Languages (NUML) in Islamabad staged a protest against the university’s administration, demanding them to refund hostel fees and to conduct semester exams online.

Students on-site have also demanded the university to return their half-semester fees and the money charged for transport service and hostels.

A number of students also complained that the quality of online classes in the last few months had dropped. Some students even argued that they were mostly depending on course books and self-made notes to survive routine tests.

One of the protesters added that some students couldn’t even attend the online classes due to the lack of facilities. “With all this, on-campus exams will be an easy way for them to fail us”, another student said.

Placards at today's #NUMLiansBoycott_PhysicalExams protest outside NUML in Islamabad. Students are sick & tired of being excluded from decisions about their education & their lives. #NumliansProtest_For_Justice pic.twitter.com/vxtDi12WYn

With the Progressive Students’ Federation joining the protests on the streets, their members have threatened to prolong demonstrations until the demands of all students are met.

A student argued that since all universities and colleges are resuming regular classes on 1st February, the exam schedule should also be delayed.

Many students have resorted to voice their concerns on Twitter as well, with a number of ‘seemingly worried’ individuals tagging Education Minister, Shafqat Mehmood, and the Higher Education Commission (HEC) in the tweets.