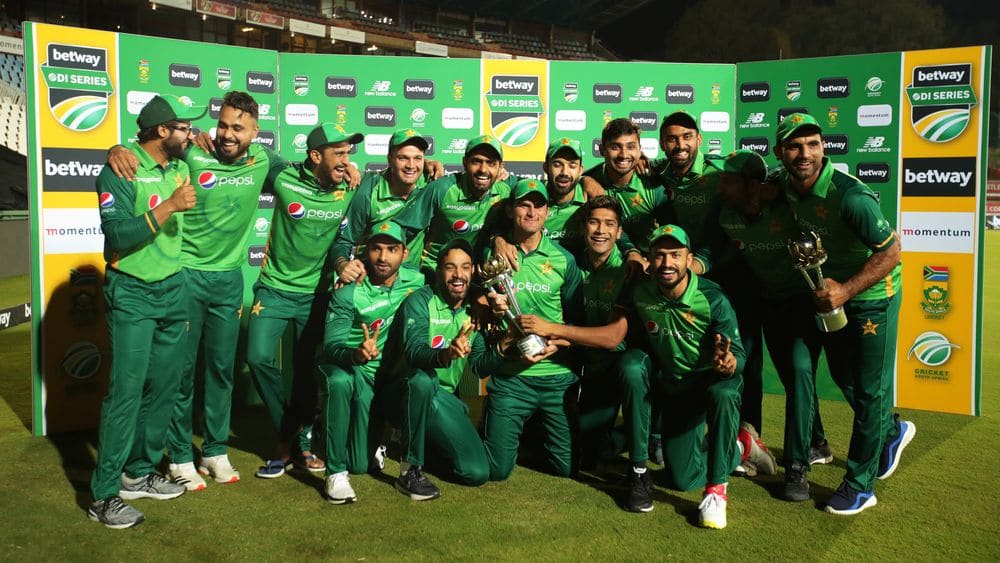 Pakistan out-classed South Africa in all departments to take home the ODI trophy and valuable ICC CWC Super League points with a comprehensive 28-run win in the series decider.

Pakistan posted a competitive total of 320/7 to set up the series finale nicely but South Africa found themselves short by 28 runs despite half-centuries by Janneman Malan, Kyle Verreynne, and Andile Phehlukwayo.

Here’s how the points table looks after Pakistan’s record-breaking series win against the Proteas:

After being put in to bat, Pakistani openers, Imam-ul-Haq and Fakhar Zaman, started off conservatively, protecting their wickets, and scored 44 runs in the Powerplay without any losses.

The duo stitched together an opening partnership of 112 runs off 128 balls which was then broken by Keshav Maharaj as he dismissed Imam for 57. He lofted one straight down Kyle Verreynne’s throat for a comfortable catch at long-on.

Fakhar Zaman joined forces with captain Babar Azam to continue solidifying the foundations for a huge total as the two added 94 runs for the second wicket and put Pakistan in the driver’s seat.

Fakhar’s golden run continued as he slammed yet another hundred following his valiant efforts of 193 runs in the second ODI. He made a sensational 101 off 104 deliveries but became Maharaj’s second victim in a soft dismissal involving Fakhar playing a paddle sweep but scooping it to the keeper.

The fall of the all-important wicket of Fakhar started a domino effect as the Pakistan innings seemed to implode with a middle-order collapse.

Babar, who was still holding his ground resolutely from the other end was assisted by Hasan Ali with a partnership of 63 off 24 balls.

Babar propelled the Pakistan total to 320/7 as he roped in 17 runs off Phehlukwayo’s final over before he was dismissed caught on the final ball for a resilient knock of 94 (82).

Proteas began their chase counter-attacking Pakistani pace bowlers to keep up with the run rate. Openers, Malan and Aiden Markram stitched together an opening partnership of 54 but Markram (18) was sent packing after a review from Pakistan revealed an inside edge that was caught by Sarfaraz behind the stumps.

Wrist-spinner Usman Qadir on debut went through the gates of JJ Smuts (17) with a flipper for his maiden ODI wicket, unsettling the South African chase.

Malan paired with Temba Bavuma for a 50-run partnership for the fourth wicket but was trapped lbw by Mohammad Nawaz for a well-made 70 off 81 deliveries.

Subsequently, Nawaz continued with his onslaught and took the wickets of Bavuma (20) and Heinrich Klaasen (4) taking his bowling figures to 3/34.

Being reduced to 140 with half the side back in the hut, the hosts were in urgent need of resurrection which Verreynne and Phehlukwayo provided. The duo consolidated a 108-run partnership for the sixth wicket raising South Africa’s hopes.

The dreams of series victory came to a poignant end with the fall of Verreynne (62) and Phehlukwayo (54) in back-to-back overs that was concluded with the Pakistani pace attack wrapping the Proteas innings for 292-all out.

Fakhar Zaman was awarded the Player of the Series for amassing 302 runs in three games.

The tour moves on to the T20Is starting on Saturday, 10 April.