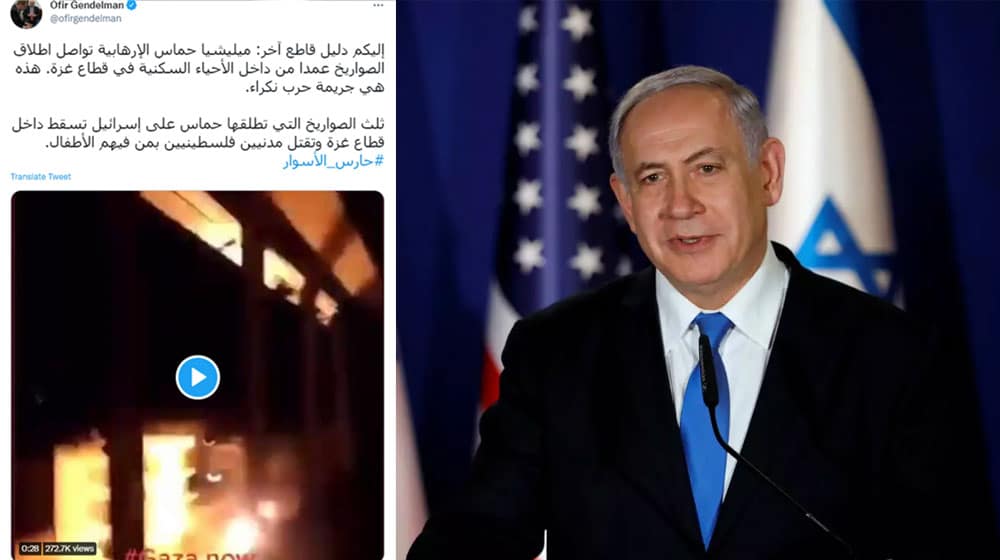 After pounding Gaza with air raids and artillery, Israel has launched a full-scale propaganda war against Palestine to justify its terror acts against innocent Palestinians.

Nearly 200 citizens, including dozens of children, have been martyred as the Israeli bombing of the Gaza strip enters the second week.

However, instead of repenting over war crimes, the spokesperson for Israeli Prime Minister Benjamin Netanyahu, Ofir Gendelman, has been sharing propaganda videos to justify the attacks.

Gendelman shared a video on Twitter, implying that Hamas is launching missiles at Israel’s densely populated civilian areas. He used the video as an excuse for the bombing of Gaza’s civilian population.

The 28-second video was widely watched and shared hundreds of times, but a fact-checker revealed that the video was not from Gaza or even from this week. It is at least two years old and shows Syrian rebels launching an attack on the government forces. The video from 2018 is easily available on YouTube and many other video streaming platforms.

PM Khan Calls Upon The Muslim World to Unite Against Israel

The viral video is just one piece of misinformation about the growing Israeli violence against Palestinians that has been circulated on Twitter, TikTok, Facebook, WhatsApp, and other social media platforms this week.

There are numerous other fake videos, edited images, and texts purporting to be from government officials in the region, posing baseless claims that Palestinian mobs were about to rampage through sleepy Israeli suburbs, with the aim of fearmongering and creating a soft corner for Israeli forces to present their brutalities as self-defense.