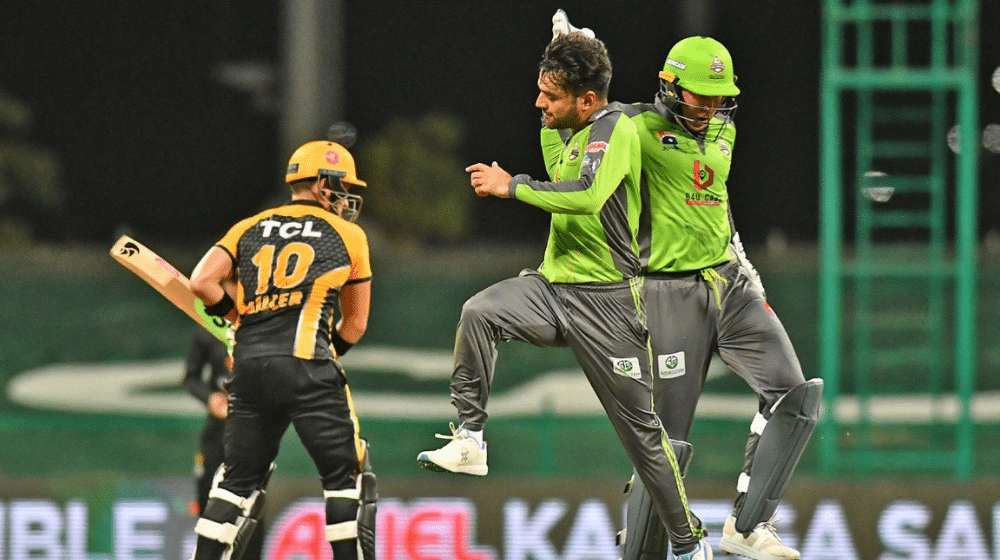 Rashid Khan’s second consecutive player of the match performance helped Lahore Qalandars to a 10 run victory over Peshawar Zalmi and solidified their position at the top of the PSL points table.

Despite a poor start early on in the first innings, Lahore recovered to post a daunting total of 170. Tim David was the star of the show with the bat, scoting 64 off 36 balls, along with Ben Dunk, who scored 48 off 33 balls.

Just like Lahore, Peshawar had a torrid start to their innings, losing Kamran Akmal and Haider Ali cheaply. Shoaib Malik put on an unlikely comeback but Rashid Khan’s magnificent bowling in the middle overs stopped Zalmi in their tracks. Rashid picked up five wickets for just 20 runs in his four overs, picking up his first five-wicket haul in franchise T20 cricket.

Lahore Qalandars sit comfortably at the top of the PSL points table, winning 4 of their first five matches. They will be looking to continue their winning momentum as they take on third placed Peshawar Zalmi.

Zalmi will be looking to restart their campaign with a win and will look towards the vast experience of Kamran Akmal, David Miller, Shoaib Malik and captain, Wahab Riaz, to provide the impetus to defeat the table toppers.

Qalandars on the other hand will look to continue where they left off last night. They will be looking to name an unchanged line-up for the mouth-watering clash.

Zalmi will look towards their veteran middle-order batsman, Shoaib Malik to provide the momentum in the middle-overs. He will be tasked with negating the impact of Rashid Khan and set the platform for Zalmi to hit big at the backend of the innings. Malik is a specialist T20 player and his performances against spin bowling makes him the key for Zalmi.

Rashid Khan is one of the most valuable players in T20 cricket and Lahore will be looking towards him once again after a player of the match performance in last night’s encounter against Islamabad United. Rashid’s all-round prowess will be the key once again as Lahore will look to choke out the opposition in the middle-overs.