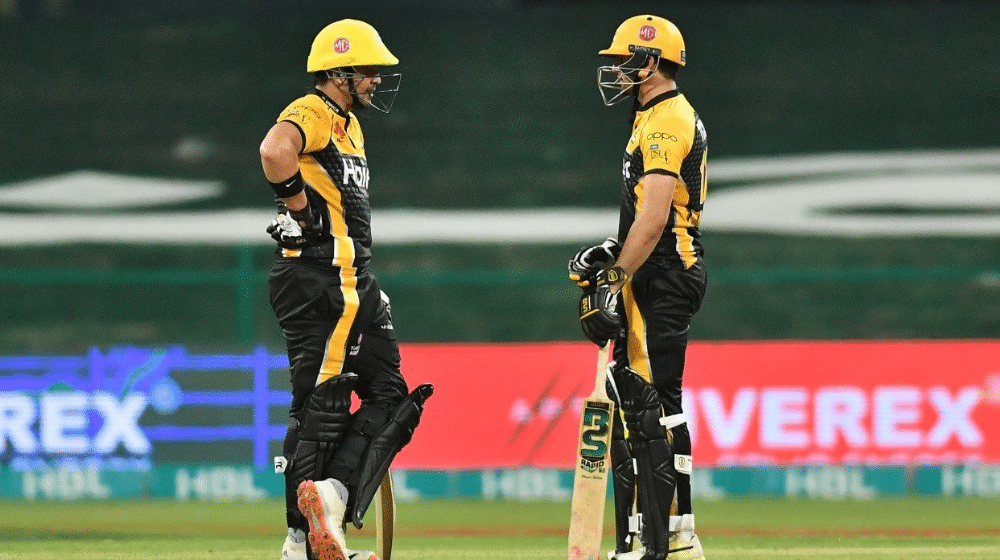 Peshawar Zalmi ran riot as they defeated Karachi Kings by 6 wickets and moved to the second spot in the PSL points table. Karachi on the other hand slipped down the fifth spot after suffering their third successive defeat in the tournament. They have gone below Multan Sultans who have a game in hand over Karachi.

Karachi’s batting unit collapsed early on and never recovered as Peshawar restricted them to their lowest ever PSL total, scoring 108 for the loss of 9 wickets at the end of their 20 overs. Young all-rounder, Abbas Afridi top scored with 27 off 18 balls, as Wahab Riaz picked up three wickets in the innings.

Zalmi cruised to the target with 54 balls to spare as Afghanistan opener, Hazratullah Zazai registered the joint-fastest fifty of PSL history.

Zazai was named as man of the match for his blistering innings of 63 off 26 balls, he hit eight fours and four sixes in his record breaking innings.

Peshawar and Karachi go face to face in a crucial match to determine the outcome of the PSL points table. Both the teams lost their previous encounters and will be looking for a quick turnaround to solidify their position for the PSL 6 play-offs.

Karachi’s bowling unit has struggled in the Abu Dhabi leg, failing to defend a target of 191 in the last night’s encounter against Islamabad United. Kings will be hoping to get the right combination and overcome Peshawar to overtake them on the points table. Fast bowler, Mohammad Ilyas, and young all-rounder, Qasim Akram might be included in the starting eleven for this match.

Peshawar, on the other hand, have been dealt major blows as their star foreign players, David Miller, Fabian Allen and Fidel Edwards have left the squad for national duty. They will be looking to replace them adequately without hurting their team combination too much.

Peshawar and Karachi have encountered each other 13 times in PSL history. Peshawar have an upper hand over Karachi, winning 8 and losing 5. Karachi will be hoping to win the match and narrow down the head-to-head record.

Mohammad Amir will have to step up his game if Karachi have aspirations to qualify for the play-offs. He has been wicket-less in the Abu Dhabi leg of the tournament and his economy rate has been unusually high. He will have to lead from the front in this particular encounter.

Kamran Akmal’s form at the top of the order is crucial to Peshawar’s success and Zalmi’s faith in his abilities has more often than not paid off. They will be hoping that Akmal fires them to a quick start in this match.