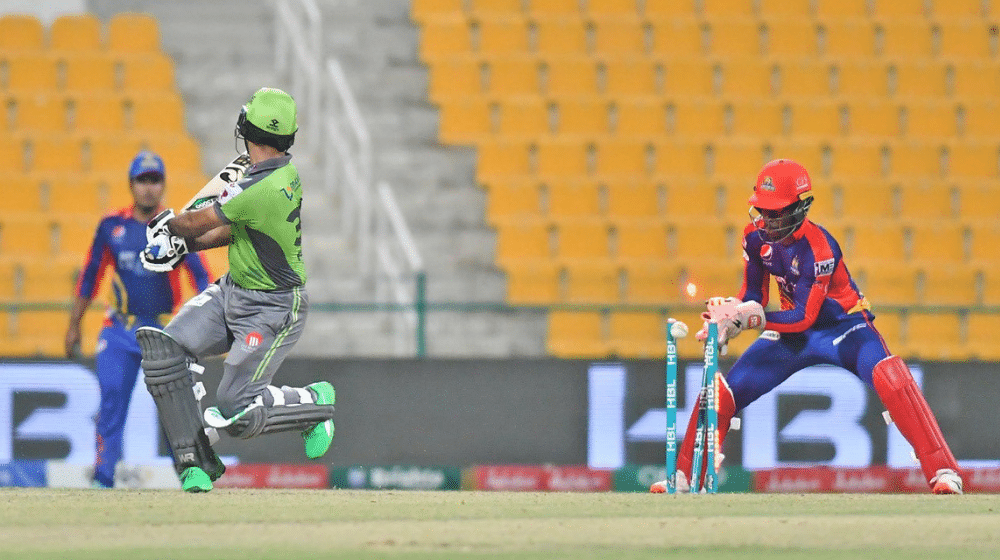 Arch-rivals Karachi Kings and Lahore Qalandars battled it out in a thrilling encounter in the 27th match of PSL 6. Karachi came out on top and won the match by 7 runs to keep them in the hunt to finish in the coveted top four spots in the PSL points table.

Karachi put on a challenging total of 176 on the board, with star batsman, Babar Azam scoring yet another half-century. He was ably supported in the middle by Kiwi batsman, Martin Guptill, who scored 43 off 31 balls. Captain Imad Wasim wrapped up the innings with quickfire 30 off 19 balls to help Karachi to a decent total. Lahore’s spinner, Rashid Khan, bowled a brilliant spell of 25/2 in four overs to give Lahore a chance.

Lahore got off to a decent start but suffered blows in quick succession as Karachi’s spinners tightened the grip. Young Afghanistan spinner, Noor Ahmed, in particular choked the Lahore batting line-up and picked up crucial wickets to restrict Lahore. Even a late flurry from James Faulkner and Tim David was not enough to get Lahore over the line.

Noor Ahmed was named as player of the match for his brilliant figures of 19/2 off four overs.

Karachi and Lahore will go face to face in a repeat of last year’s final. This time around though, the circumstances are completely different as both will fight to make it to the top four on the PSL points table.

Lahore will be looking to overcome two disappointing defeats and will have to be wary of yet another batting collapse. Their poor batting performance may have caused them a few headaches and they will be looking to make a few adjustments to solidify their unit. Young middle-order batsman, Salman Ali Agha, may be called upon instead of Zeeshan Ashraf, who has failed to impress.

Lahore and Karachi have encountered each other 12 times in PSL history. Karachi have won 7 and lost 5. Lahore will be looking to narrow the head to head record in tonight’s encounter.

James Faulkner has been a revelation for Lahore Qalandars in the Abu Dhabi leg of the tournament. The left-arm medium-pacer has consistently taken wickets upfront and is amongst the top five wicket-takers of the tournament despite only playing 4 matches. Lahore will be hoping that the Australian continues his fine form and takes quick wickets once again.

Babar Azam has been Karachi’s most consistent batsman over the past few years and he shoulders most of the responsibility of Karachi’s batting unit. Karachi will be hoping that their star batsman can repeat his heroics and help them down their arch rivals.