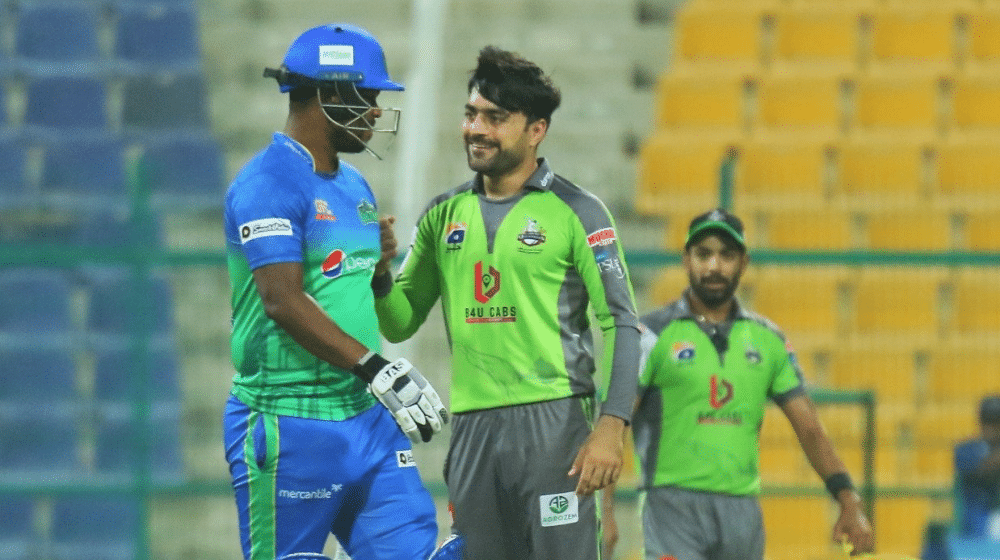 Multan Sultans powered their way to the PSL play-offs with a convincing 80 run victory over Lahore Qalandars. Qalandars slipped down to the fourth spot in the PSL points table and are on the brink of elimination as Karachi can overtake their position if they beat Quetta Gladiators in their final group match.

Multan got off to a sluggish start as Shan Masood was dismissed on the first delivery of the match. Middle-order batsman, Sohaib Maqsood led the charge for Multan and scored a scintillating half-century to take Multan to a decent total. Sohail Tanvir helped Multan to a challenging total of 169 after smashing Haris Rauf for 24 runs in the final over of the innings.

Dahani was named as player of the match for his figures of 5/4 in 3.1 overs, his best figures in T20 cricket.

The fight for the top four spots in the PSL points table is going to the wire as Multan Sultans face Lahore Qalandars in a crucial encounter. Qalandars need to win the match to book their place in the playoffs, meanwhile, a defeat can see them on the brink of elimination, while Multan will confirm their spot in the next round.

Multan Sultans have been one of the in-form teams in the tournament and have won three consecutive matches in the Abu Dhabi leg. Their batsmen have been in sublime form and their bowling is coming together at just the right moment for them. They are expected to name an unchanged starting eleven as the lineup and the team combination is settled.

Lahore, on the other hand, have had a change in fortunes. After winning their first two games of the Abu Dhabi leg, they have lost their previous three matches. Last night’s narrow defeat to arch-rivals, Karachi Kings, has left them in a precarious position. Despite their poor run, Qalandars are also expected to start with the same lineup.

Lahore will be hoping their senior players handle the pressure situations and help them qualify for their second-ever PSL play-offs.

Lahore and Multan have encountered each other 8 times in PSL history. Both the teams have won four matches each and will be looking to pull ahead in the head-to-head record.

Qalandars batting line-up has failed miserably in the last few matches, with the top order and the middle-order failing to score big. Ben Dunk’s poor form is worrisome and Lahore will be hoping that the Australian power-hitter can regain his old form. Qalandars will be relying on Dunk to provide the impetus in the middle part of the innings.

Imran Khan Snr. has been one of Multan’s most impressive bowlers. He has picked up five wickets in the three matches of the Abu Dhabi leg so far and has been economical. Multan will be hoping that Khan continues his momentum and delivers for them in the crucial encounter.