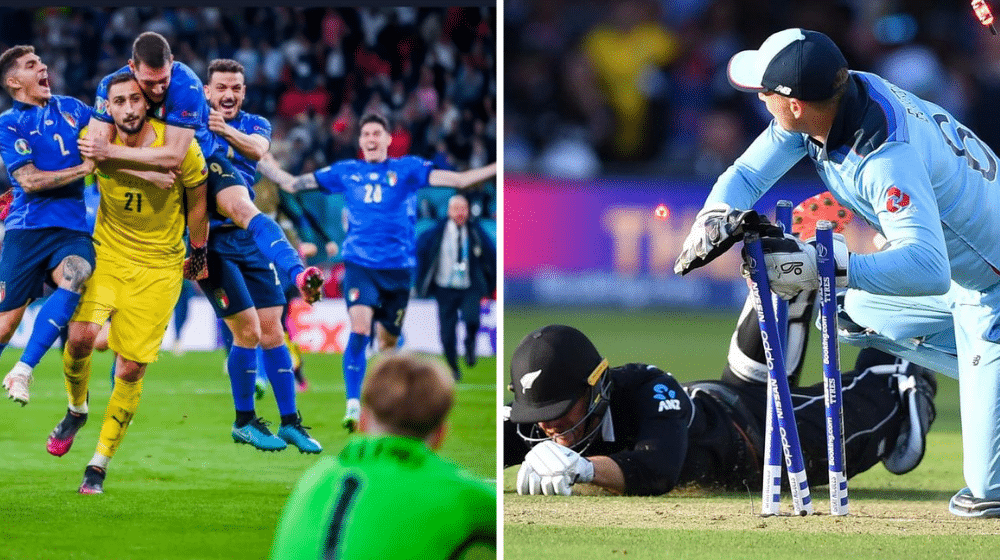 New Zealand players referred to the ICC Cricket World Cup 2019 final when England beat the Kiwis in controversial circumstances as England had hit more boundaries in the regular 50 overs, despite both the teams scoring equal runs in both the 50 overs and the super over.

Kiwi all-rounder, Jimmy Neesham, known as one of the wittiest cricket players on social media, took to Twitter to take a dig at England. He tweeted, “Why is it a penalty shootout and not just whoever made the most passes wins? #Joking.”

Why is it a penalty shootout and not just whoever made the most passes wins? 👀 #joking 😂

Former New Zealand all-rounder, Scott Styris, also took to Twitter to poke fun at the English football team. He tweeted “I don’t understand… England had more corners… they are the champions! #Stillsalty.”

I don't understand…. England had more corners …. they are the champions! #Stillsalty

England lost to Italy in a penalty shootout in the highly anticipated final. England’s left-back, Luke Shaw, scored the first goal of the match after only two minutes to send the home crowd into a frenzy at the Wembley Stadium in London. England was unable to hang onto their 1-0 lead as the veteran Italian center-back, Leonardo Bonucci, struck back in the 67th minute of the match.

The teams were unable to break the deadlock after the regular 90 minutes and then again in the extra time, as the pulsating encounter headed towards penalties.

Italy managed to hang on to their nerves and won the penalty shootout 3-2 as England’s three young players, Marcus Rashford, Jadon Sancho, and Bukayo Saka, were unable to beat Italy’s goalkeeper and player of the tournament, Gianluigi Donnarumma.