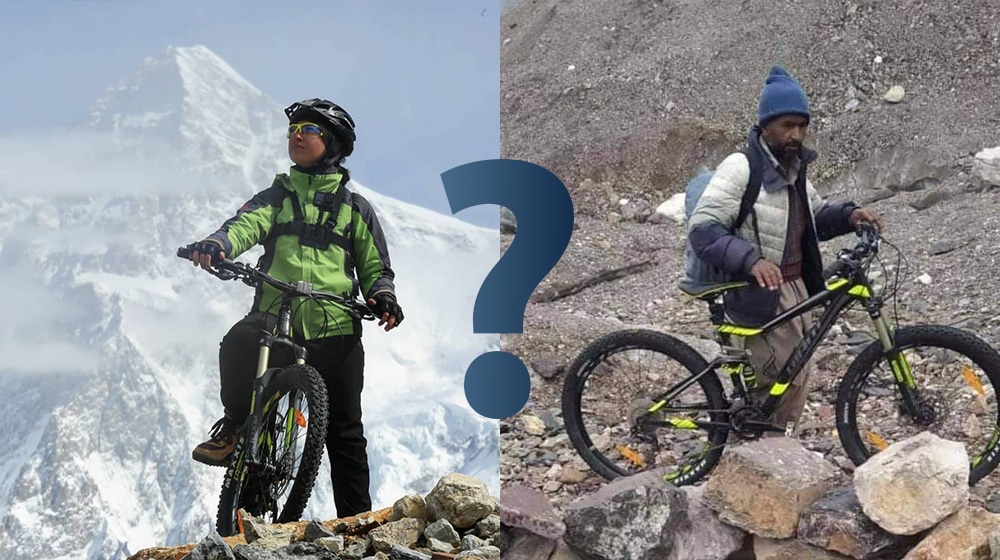 Askole is the gateway to four of the world’s fourteen highest Eight-thousanders and is the launchpad for expeditions to K2. Mountaineers often choose to travel to this little village via jeep and start trekking from here towards the world’s second-highest peak on foot.

The K2 base camp trek is an arduous hike, to say the least, where trekkers follow a rocky trail nestled within an amphitheater of high-rise mountains. Given that the track is covered in loose rocky moraine, it’s physically impossible for cars, jeeps, and bikes to be used here. To that effect, did Samar Khan cycle her way through a trail that renowned mountaineers consider as the most difficult road that leads to the heavens?

After news of Samar Khan’s “historic feat” spread across various media outlets, netizens as usual flocked on Twitter to debunk the alleged feat, explaining that it was actually the porters in the area who carried the athlete’s bicycle from Jola to K2 base camp.

First Pakistani porter carrying the cycle from Jola to K2 base camp. 🙏 pic.twitter.com/oavrBtyaGC

The unsung hero, Balti porter who made Samar Khan first woman to reach #K2 base camp on a cycle 😀 pic.twitter.com/uWLOIEi1nj

NITB’s social media was quick to congratulate the cyclist.

We congratulate to brave, enthusiastic and determined athlete #SamarKhan to become the first woman to reach the world’s second-highest mountain K2’s base camp on a cycle. pic.twitter.com/kjjJGt62g2

Famous Tv personality and anchorperson, Mansoor Ali Khan, delivered his sleekest rant ever on a YouTube vlog in this regard, further debunking the story by comparing his own experiences.

“You cannot reach K2 base camp via cycle. Let me make this very very clear”, he said, adding that “as you go further up the track, forget about riding a bike, it’s even more difficult on foot”.

Trekking on a bicycle towards the K2 base, for anyone in the world really, would be a world record in an ideal situation. Physically, it is impossible, and no amount of practice in extreme sports could ever allow Samar Khan to achieve that on a bicycle.