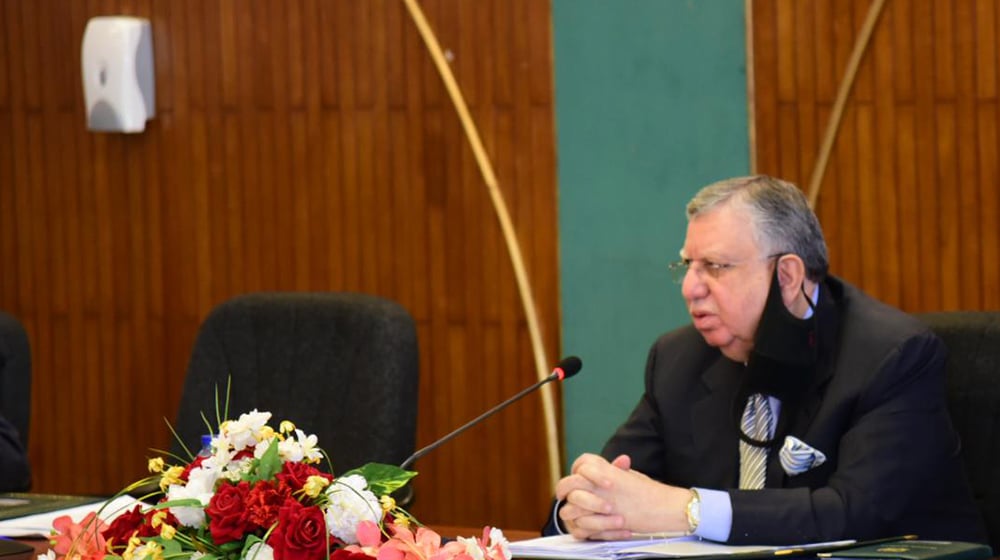 The Economic Coordination Committee (ECC) of the cabinet has approved different important summaries, including the summary of Kamyab Pakistan Program (KPP), which is deemed to be the most ambitious micro-credit program ever planned in Pakistan.

The ECC meeting was presided over by Federal Minister for Finance and Revenue Mr. Shaukat Tarin on Thursday. It also gave the nod to the summaries about disbursement of salaries to Pakistan Steel Mills (PSM) employees, and purchase of 40,000-metric ton (MT) wheat by the World Food Programme (WFP) from Pakistan Agricultural Storage & Services Corporation (PASSCO).

The Finance Division presented an updated summary regarding KPP before the ECC. It was revealed that the program had been streamlined in consultation with stakeholders to disburse microcredit for uplifting marginalized segments of society. The KPP has five components namely: Kamyab Karobar, Kamyab Kissan, Naya Pakistan Low-cost Housing, Kamyab Hunarmand, and Sehatmand Pakistan.

The Committee was briefed that under the first three components, micro-loans shall be disbursed among eligible persons registered with Ehsaas Data through the National Socio-Economic Registry (NSER) having a family income of up to Rs. 50,000 per month. The last two components of KPP will be integrated with the existing programs. The KPP is aimed to integrate with the government’s ongoing skill development program for imparting educational and vocational training.

As per the revised framework of KPP, the selection of Wholesale Lenders (Banks) will be through competitive bidding in line with PPRA rules. The Micro Finance Providers (MFPs) will be selected by the wholesale lenders. The government will provide two guarantees:

During the first phase, the KPP will be launched in Balochistan, Khyber Pakhtunkhwa, Gilgit-Baltistan, AJK and a few other poorest districts of Sindh and Punjab. Eventually, KPP will be extended to the whole country. On the implementation side, the Kamyab Pakistan Information System (KPIS), a digital portal, is being established. It is fully integrated with telecommunication companies, NTC, Ehsaas/NSER, and NADRA for verification of beneficiary’s eligibility.

After due deliberation, the ECC approved the KPP for onward submission to the cabinet. The members of ECC commended the salient features of the program and regarded it as a flagship initiative of the present government to empower the under-privileged population.

The ECC considered and approved another summary by the Finance Division regarding the fixation of dividends at the rate of 10% on the face value of State Bank of Pakistan (SBP) shares for the financial year ended on June 30, 2021.

The Secretary Ministry of Industries and Production briefed the Committee on availability of sufficient stocks of sugar. He further apprised the ECC of the steps being taken to import sugar for building strategic reserves. After a detailed discussion, the ECC approved to import sugar in three segregated tenders of 50,000 MT each so that there is more participation and increased competition when international prices fall down. The Committee emphasized the need for ensuring a smooth supply of sugar throughout the country. It directed for initiating crushing by the sugar mills at the beginning of November 2021 as done last year.

The ECC considered and approved a Technical Supplementary Grant (TSG) in favor of the Ministry of Interior for construction of Frontier Constabulary Training Center, Michni, Khyber Pakhtunkhwa amounting to Rs. 50 million during FY 2021-22.

Besides, the ECC accorded approval for the lowest bid received for award of fourth international wheat tender for the FY 2021-22 to import 120,000 MT of wheat as tabled by the Ministry of National Food Security & Research.

On the occasion, the Finance Minister stated that mutual consultation would pave the way for collective decision-making under the umbrella of cabinet committees. “This facilitates the process of decision-making in the public sector.”

The ECC considered and approved the summary presented by the Ministry of National Food Security and Research regarding the purchase of 40,000 MT of wheat from PASSCO by WFP.

The Ministry of Energy presented a summary regarding financial support to power generation companies (GENCOs). The ECC approved Rs. 500 million as a Technical Supplementary Grant out of the total budget allocated to the Power Division.

Moreover, the ECC also considered and approved the Power Division’s summary regarding 40% payment of the total amount payable to IPPs of 2002 policy.