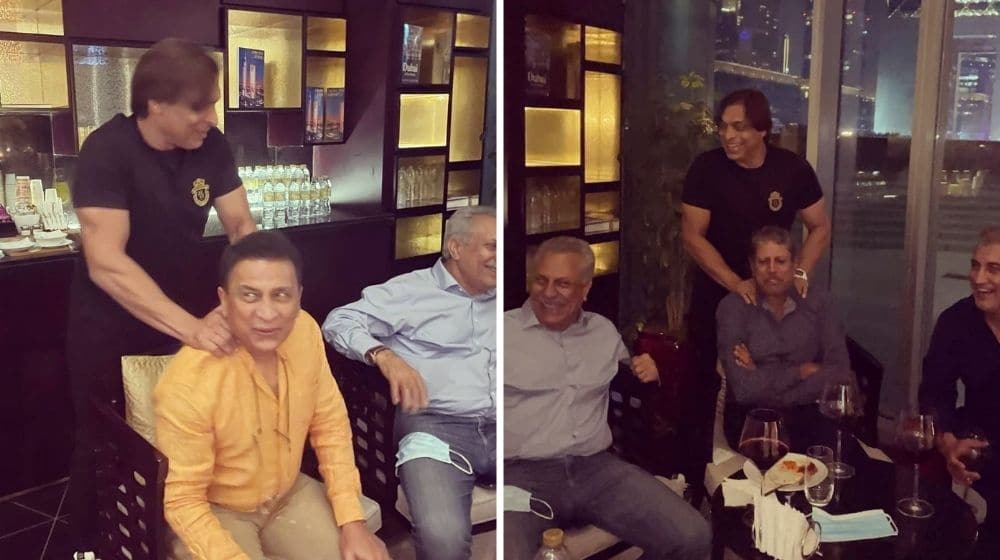 The anticipation of the historic T20 World Cup clash between Pakistan and India is not only limited to cricket fans. Former cricketers from both the rival countries have also gathered in UAE to engage in the festivities related to the high-octane encounter.

Shoaib can be seen having a good time with both Kapil and Gavaskar. Shoaib uploaded the photos on his official accounts across various social media platforms.

Shoaib tweeted, “chilling with the best of the best. The great Zaheer Abbas, Sunil Gavaskar, and Kapil Dev. All set for the cricket ka maha muqabla”.

Earlier, Shoaib had uploaded an image with former Indian off-spinner, Harbhajan Singh as both former cricketers had a pre-game discussion in an event hosted in Dubai.

Shoaib had captioned the image, “With Mr. Know it all, Harbhajan Singh in Dubai for a pre-discussion about the mother of all competitions.”

With Mr. I know it all @harbhajan_singh in Dubai for a pre discussion about the mother of all competitions. #Dubai #Pakistan #India #worldcup pic.twitter.com/40VS5vEMqB

The cricketing fraternity in Pakistan was not impressed with the picture as Harbhajan recently took a dig at Pakistan. Harbhajan said that Pakistan should just give India a walk-over as they know they cannot defeat India in World Cups.

The highly-anticipated encounter between the two sides will be played on 24 October at Dubai International Cricket Stadium. Both sides will be determined to get their tournament off to a good start and get a head start in the race to make it to the semi-finals.