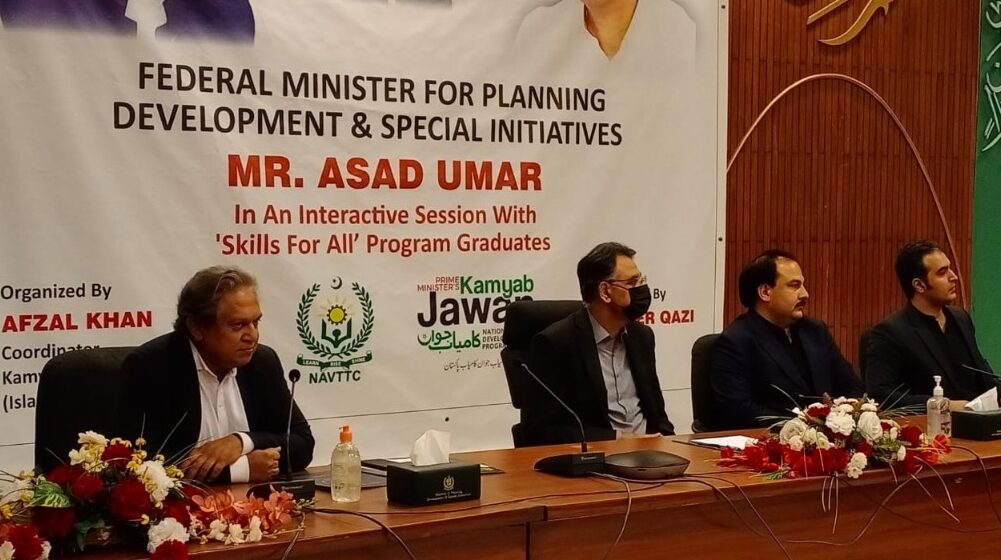 Federal Minister for Planning, Development, and Special Initiatives, Asad Umar, met in an interaction session with the graduates of the “Skill for All Program” under the Prime Minister’s Kamyab Jawan program.

The meeting was attended by CEO National Vocational and Technical Training Commission Syed Javed Hassan and students from different universities of Islamabad.

During the meeting, Federal Minister, Asad Umar, discussed in detail the experiences of the students acquiring skills in various fields under the “Skills for All Program,” and their suggestions were also taken into consideration. It was informed in the meeting that under this program 50,000 youths are being imparted technical skills. The first batch of the program has completed its tenure, the second batch is being released, and the third batch will be started within a few months.

Addressing the students, Asad Umar said that if a change was to take place in this country, the young generation would have to be technically trained. He said that the young population of Pakistan is one of its greatest assets. If provided quality training and skills to be economically engaged, they will significantly boost the national economy. However, workers’ inadequate skills and education often hinder both domestic investment, resulting in limited employment opportunities and consequent social problems.

He said that we must endeavor to create an eco-system that leads to the provision of high-quality skills training as required by industries in the various sectors of the economy. This will generate a cycle of investments, job opportunities, employment, tax collection/remittances, prosperity, and thereby more investment in skills training.

Asad Umar said that the students undergoing training would be provided loans on a priority basis under the Kamyab Jawan program “Youth Entrepreneurship Loan Scheme,” so that in the future, these students can start their own decent business on a small scale.

In a meeting with the students, the Federal Minister announced that the current program has a capacity of 50,000 students, which is being increased to 75,000, and it could be further increased in the near future as well. It was also announced that the students who get top positions in each batch would be given an opportunity to benefit from other programs of Skills for All.

Talking about the courses taken under the Skill for All program, the students shared their experiences and commented on the facilities provided by the government. The students remarked that the program helped them a lot in gaining expertise in various technical fields. They also requested the Minister to extend the Skill for All program from six months to one year and involve small-scale students in various industries to enhance their skills.