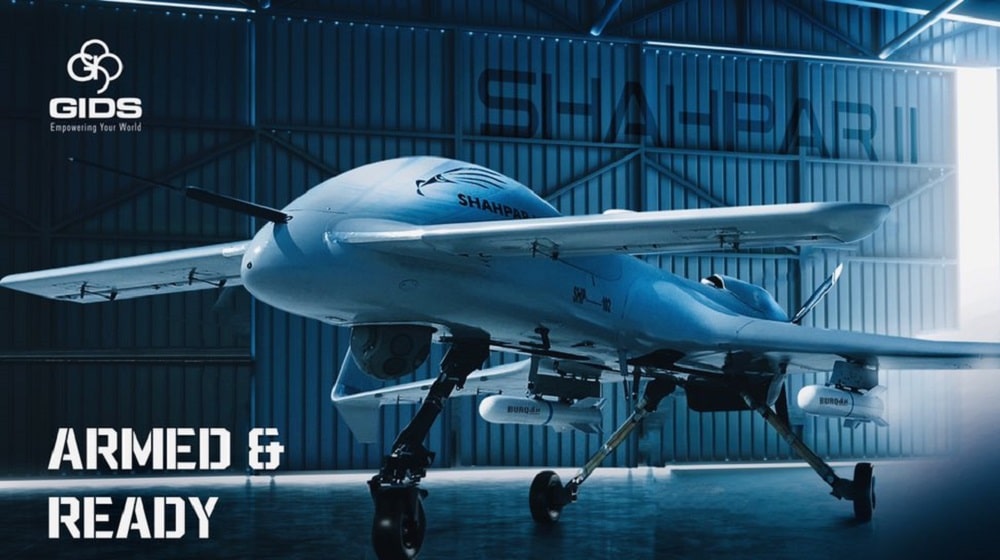 The second edition of EDEX is being held from 29 November to 2 December at the Egypt International Exhibition and Convention Center in New Cairo. Egyptian President Abdel Fattah El Sisi inaugurated the event on Monday.

According to details, the SHAHPAR-II MALE reconnaissance drone has a combat range of 1,050 km and a real-time data link range of more than 300 km along with SATCOM Beyond Line of Sight (BLoS) capabilities.

The drone is armed with two new advanced semi-active laser-guided air-to-surface missiles named BURQ, indigenously made by the National Engineering and Scientific Commission (NESCOM). The two weapon stations of the drone can effectively install missiles up to 60 kg each.

BURQ missile has a mass of 45 kg that can effectively engage enemy personnel, light and armored vehicles, bunkers, and buildings in a radius of 8 km.

Besides, the SHAHPAR-II MALE reconnaissance drone is equipped with retractable landing gear capable of automated and asymmetric takeoffs and landings.

The frame of the drone is made out of a composite, making it lighter and aerodynamically more maneuverable. For the unversed, a composite is made from two or more different materials that, when combined, are stronger than individual materials.

With the official launch of the SHAHPAR-II MALE reconnaissance drone, Pakistan has entered the MALE Unmanned Combat Aerial Vehicle (UCAV) market. Pakistan’s armed forces will be the first operators and will export it to different countries in the Middle East, South America, and Africa in the future.

Let’s have a look at the SHAHPAR-II MALE reconnaissance drone in operation at EDEX 2021: