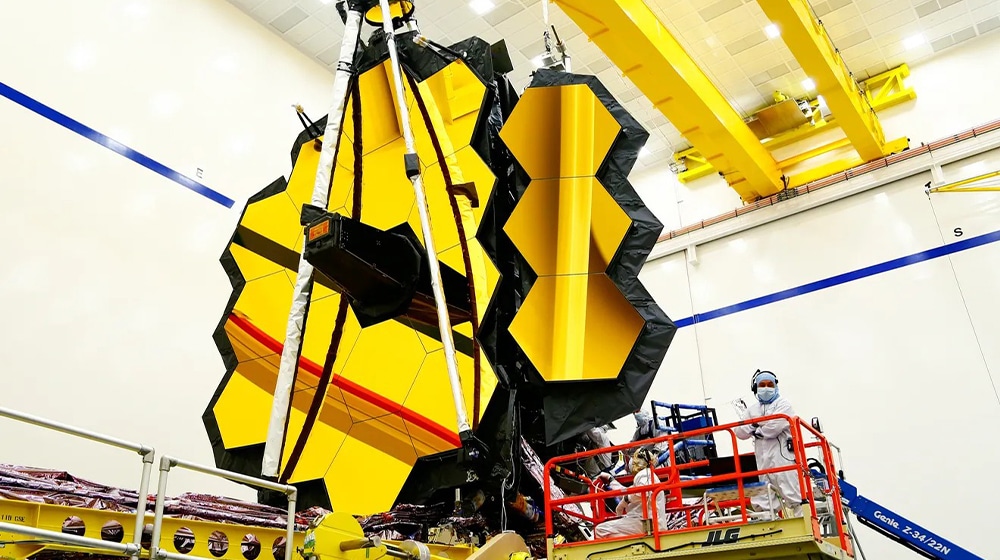 The National Aeronautics and Space Administration (NASA) is treating space enthusiasts and astronomers around the world tomorrow (25 December) to one of its greatest presents with the launch of the most powerful space telescope ever created, atop the Ariane 5 rocket from French Guiana in South America.

Called the ‘James Webb Space Telescope’ (JWST), the space observatory is meant to be the successor of NASA’s Hubble Space Telescope that is already orbiting the Earth. It is an engineering marvel that will completely transform the way the cosmos is studied. It resembles a time capsule and has the ability to peer 13 billion years back in time and study the formative years of the universe. 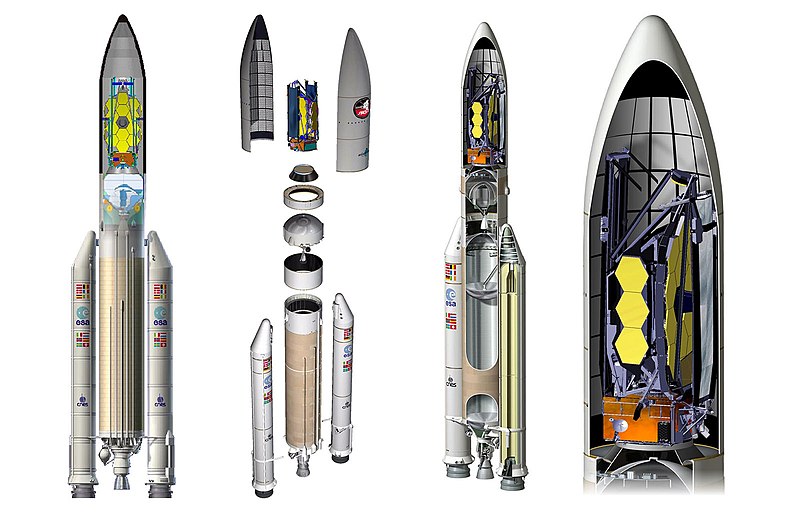 The telescope houses an enormous primary mirror 21.5 feet (6.5 miles) wide and will be placed in orbit about a million miles from the earth, at roughly four times its distance from the Moon.

Thanks to its larger mirror, the JWST will be between 10 and 100 times more sensitive than the Hubble Space Telescope, allowing it to spot very faint objects in the sky.

It is being launched from close to the equator, which gives it an extra push toward its final destination. Unlike the Hubble which is close to the earth (around 350 miles), the JWST will serve humanity from approximately one million miles away and will take about a month to reach the second Lagrange point (L2). L2 is one of the five regions in space between the sun and the earth, where the gravitational effect of both the sun and the earth over the objects almost cancel each other out, and very little effort is required to maintain direction. 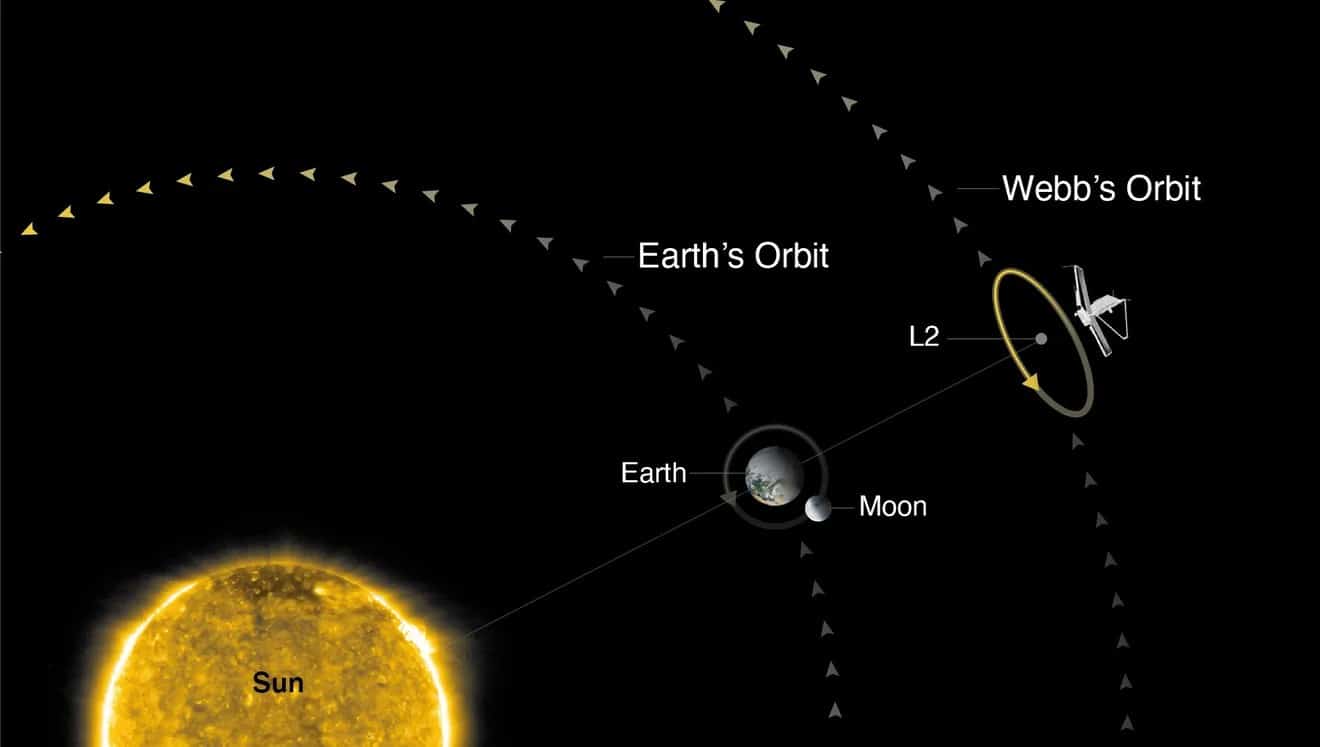 Since the telescope can see through infrared wavelengths only, it will always remain behind the earth to avoid the sun’s heat signature that can hinder its ability to capture and observe the faintest heat signatures from the farthest corners of the universe. The JWST is fitted with special tennis court-sized heat shields below it as an added measure so that its equipment can function at the desired temperature (-225° C).

While astronauts have been sent to repair the Hubble telescope, no humans will ever be able to repair or upgrade the JWST because current technology does not allow the transportation of humans and equipment to such great distances. Resultantly, after reaching space, the telescope will have to unpack and unfold traveled as far as Webb’s planned orbit.

The launch is just the beginning. Until it reaches L2, hundreds of tiny things will have to go just right before NASA can officially begin science observations, and they all must take place far away from any human help in the cold darkness of deep space.

Here is the basic timeline of the major activities planned for after the launch: 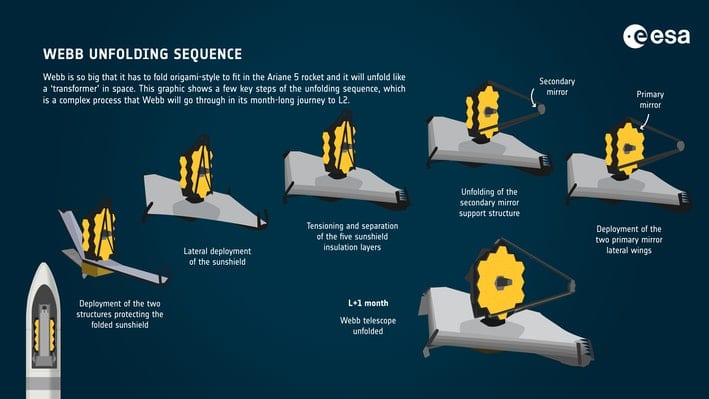 All these activities involve over a hundred single points of failure that are should follow a particular sequence precisely. If any one of the sequences fails, it will end the entire project.

After reaching its destination and all the unfolding along the way, the JWST will require another six months of fine-tuning before it is fully capable of doing science for humanity by mid-summer 2022. 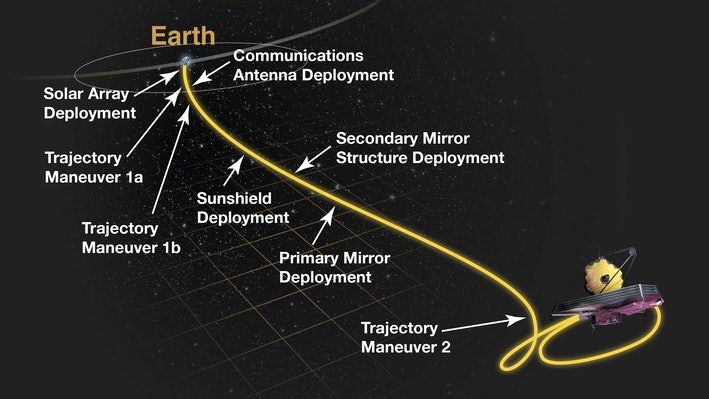 The service life of the project is 10 years, which is actually being dictated by the fuel it has to maintain its course. Once the fuel runs out, the project will be terminated.

Maybe NASA will develop technology and robots to refuel the system and extends its life by then, but only time will tell whether this is possible. Until then, we should look forward to the amazing discoveries that the device may give us.