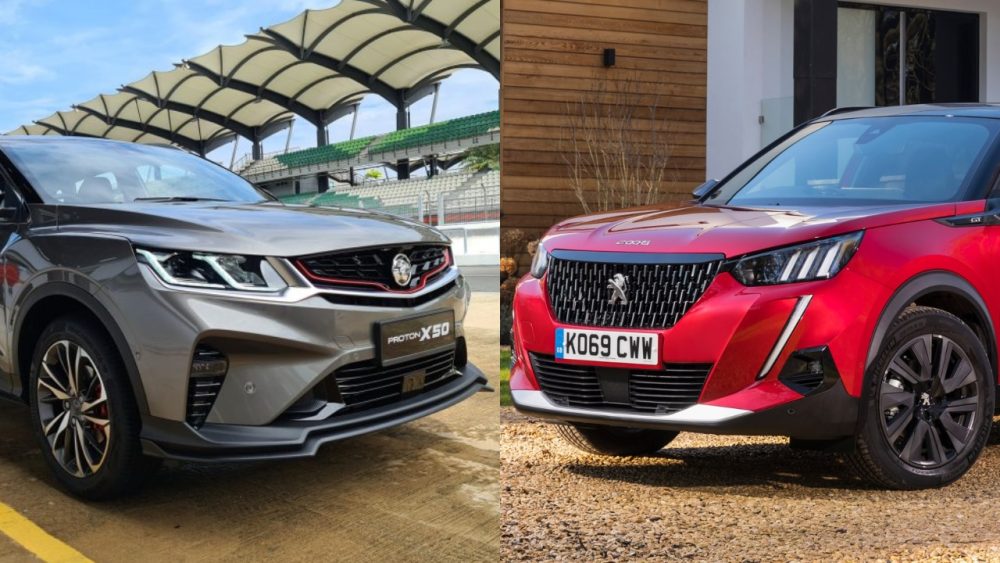 Not long ago, the Pakistani car industry was the image of a tumbleweed rolling by in a desolate desert. The market was ruled by three carmakers, which left the buyers with limited options.

However, the past three years saw the Automotive Development Policy (ADP) 2016-21 breathe some life into the ailing industry by opening the gates for several new carmakers and previously exiled ones as well.

This caused the undeniable paradigm shift that is the rise in the popularity of crossover SUVs. While some new ones have quickly carved a niche for themselves, others have not yet reached their full potential due to late entry, COVID-19 induced handicaps, or simply not being able to keep up with the demand.

Regardless, a few new crossovers are set to debut this year, with Proton X50 and Peugeot 2008 being two of the most anticipated arrivals. Both are subcompact crossover SUVs that will compete with the high-end C-segment sedans.

Both crossovers are also latest generation products that promise a modern package of utility and style, but is one better than the other? In this detailed comparison, we will attempt to answer that question. 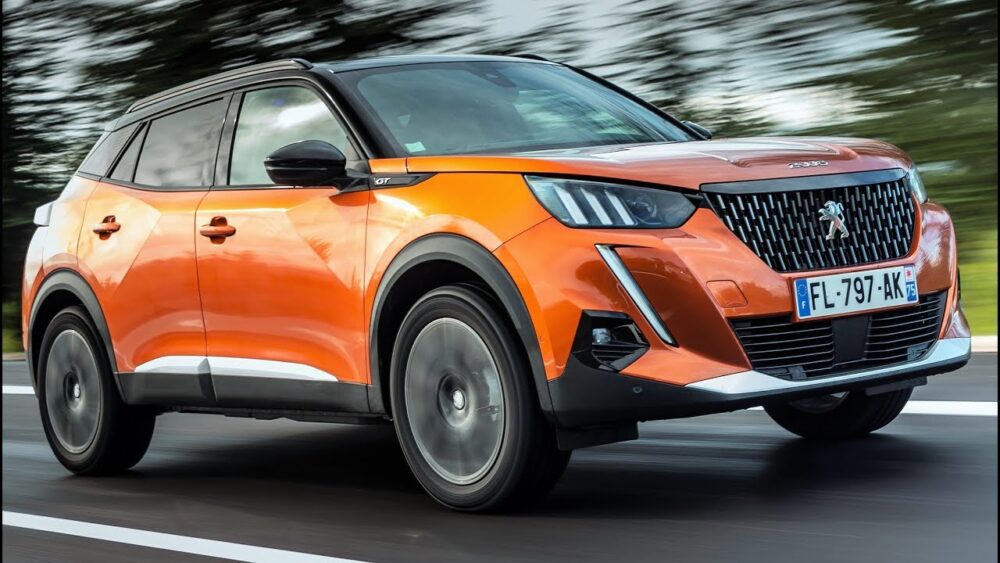 Peugeot 2008 can easily take the title for the best-looking SUV in Pakistan on launch. It is modern, unique, and will catch the fancy of many Pakistanis who love over-zealous styling.

The large front grille with verticle mini-slats, sporty front bumpers, headlights that resemble reptilian eyes, and the Daytime Running Lights (DRLs) that resemble snake fangs make for a distinct and aggressive front fascia. From the side, apart from the contrasting color of the D-pillar, with a few unique character lines and the 18″ rims (in the top-trim only), 2008 seems a lot less dramatic. 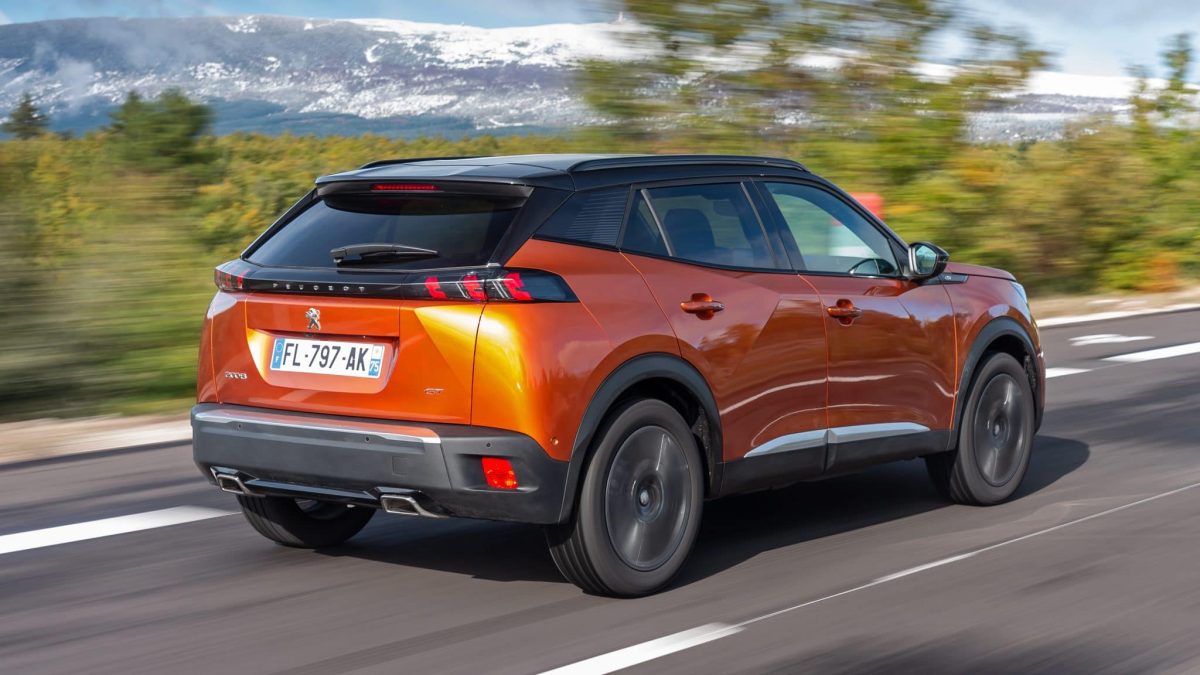 The modernness continues at the back, though, with a stylish tailgate, streaked LED taillights on either side, and a unique rear bumper. All styling elements come together nicely to create a distinct and beautiful crossover SUV. 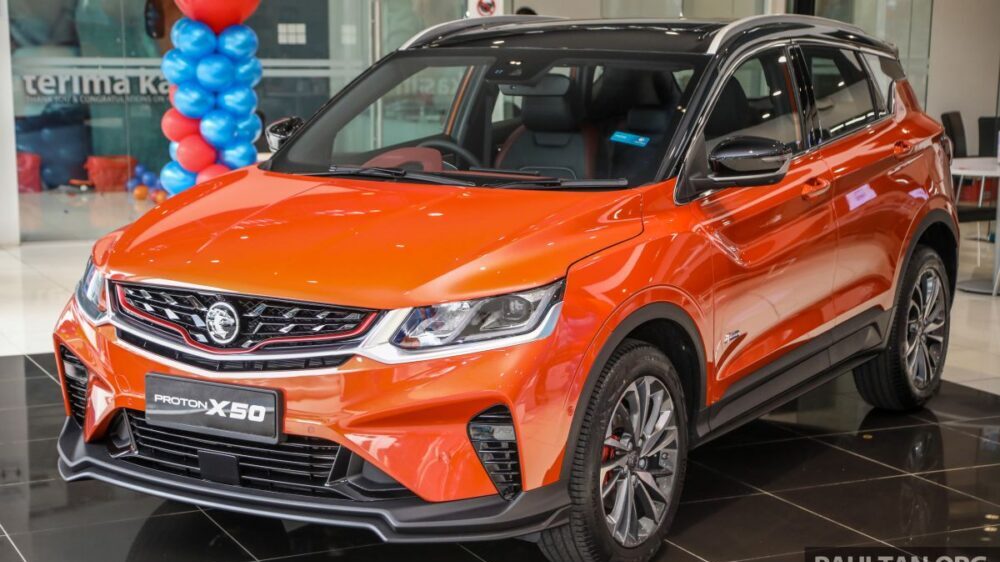 Proton X50’s design seems to be heavily inspired by the European hot-hatches. For a crossover, X50 has an uber-aggressive frontend, featuring a sharp pair of projector headlights with DRLs, an angular front bumper design, and an edgy front grille with a thin red line that goes under the Proton emblem, making it look like a sporty hatchback.

The side profile is quite standard, much like any new crossover SUV. Some styling elements include 18″ two-tone alloy wheels, some lines and curves that run across the length of the vehicle, and a pair of silver roof-rack rails on top. The flagship trim also gets blacked-out A, B, and C pillars, although it is unknown which trim Pakistan will get. 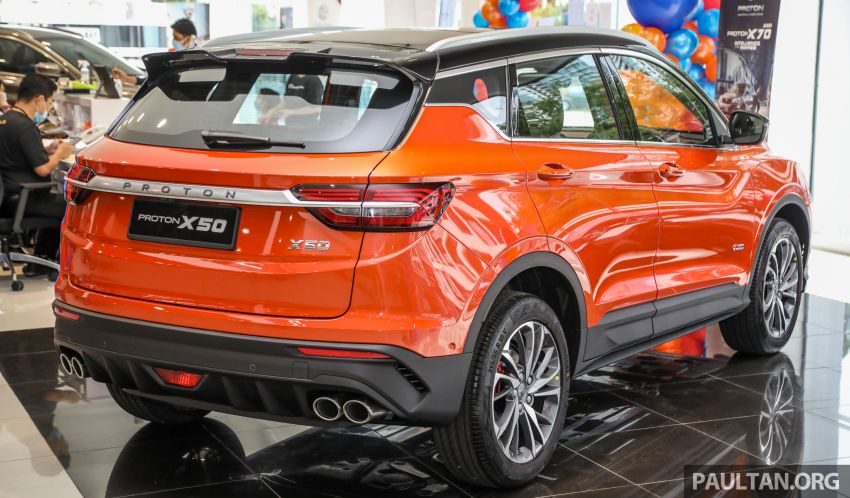 The rear features sharp LED taillights, a spoiler on top, the 4th brake light in the middle of the rear bumper, and the quad-tail exhaust cut-outs, all of which, add to the SUV’s overall sporty look. 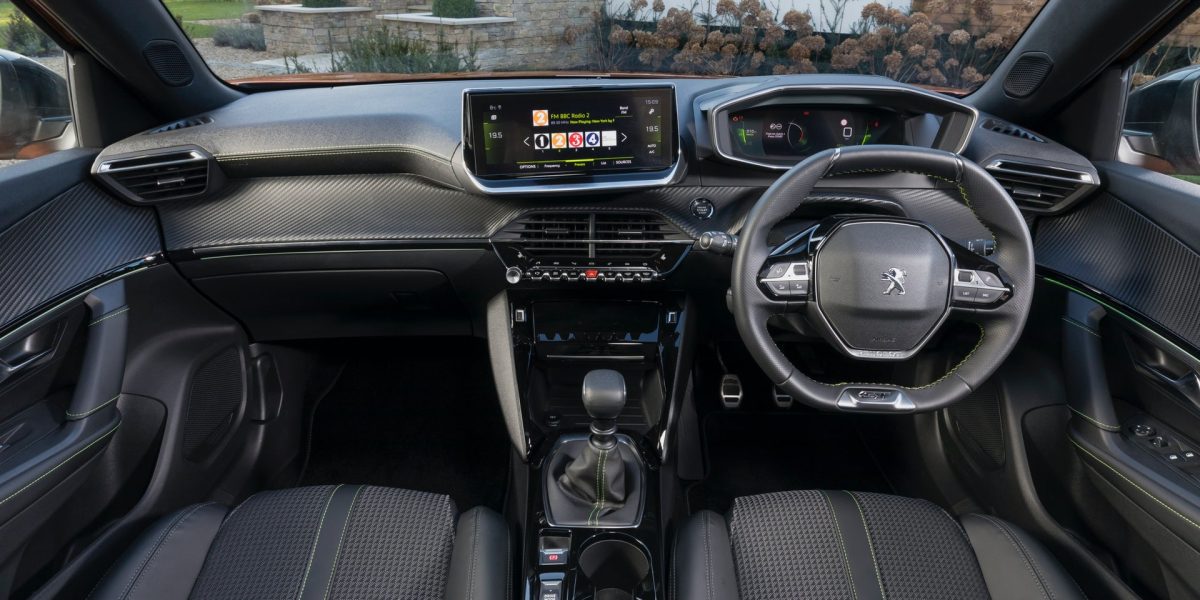 The interior of Peugeot 2008 is just as radical as its exterior. While it is quite intuitive and easy to understand, it looks incredibly modern due to the unique shapes and layout of the overall dash, air vents, hexagonal steering wheel, and a sharp-looking driver’s display.

Although the interior incorporates nice materials such as leather, there are some hard plastic trim pieces around the non-essential touchpoints as well. In terms of cabin space, 2008 is big enough to comfortably seat four adults or two adults and three children.

2008 has 434 liters of luggage space, which can be extended to well over 1000 liters with the rear seats folded down. Overall, Peugeot 2008’s interior outdoes all other SUVs in the same category. 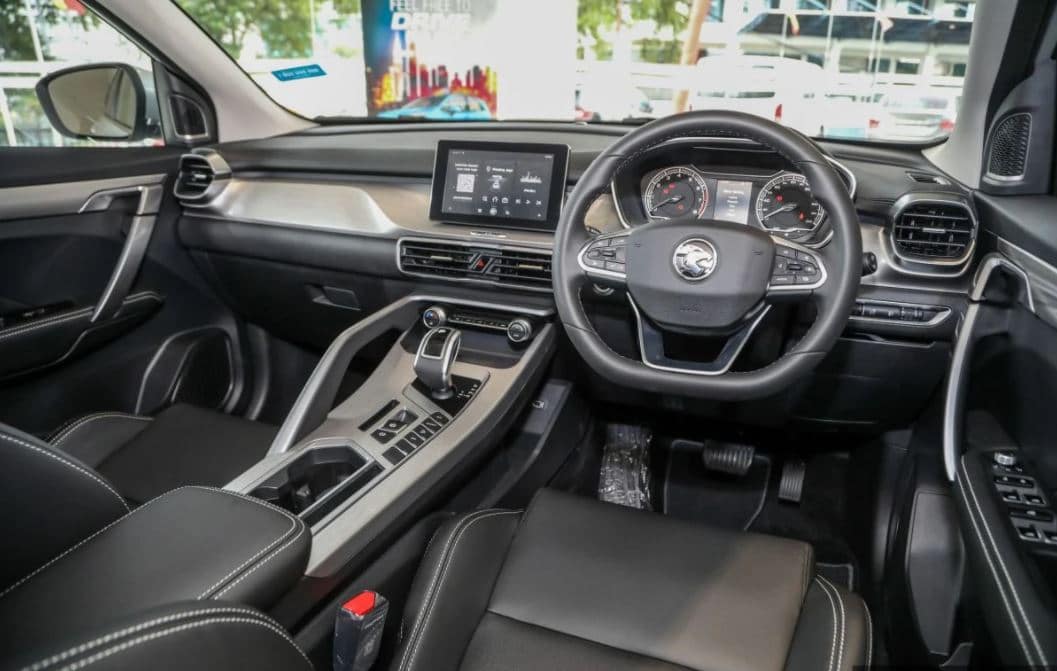 Although Proton calls it a “jet-fighter” inspired interior, it is comparatively a lot simpler compared to its adversary. Not to say that the interior is bad in any way, as it is complete with a contemporary design, expensive feeling materials, and an array of advanced features.

Being a subcompact SUV, X50 only has space for a family of five and has a comparatively smaller boot space of just 330 liters. Overall, X50 has a great interior design, but it falls short of the Peugeot 2008.

Interestingly, despite both SUVs being almost the same size, Proton X50 is considerably heavier than Peugeot 2008. The dimensions of both SUVs are as follows: 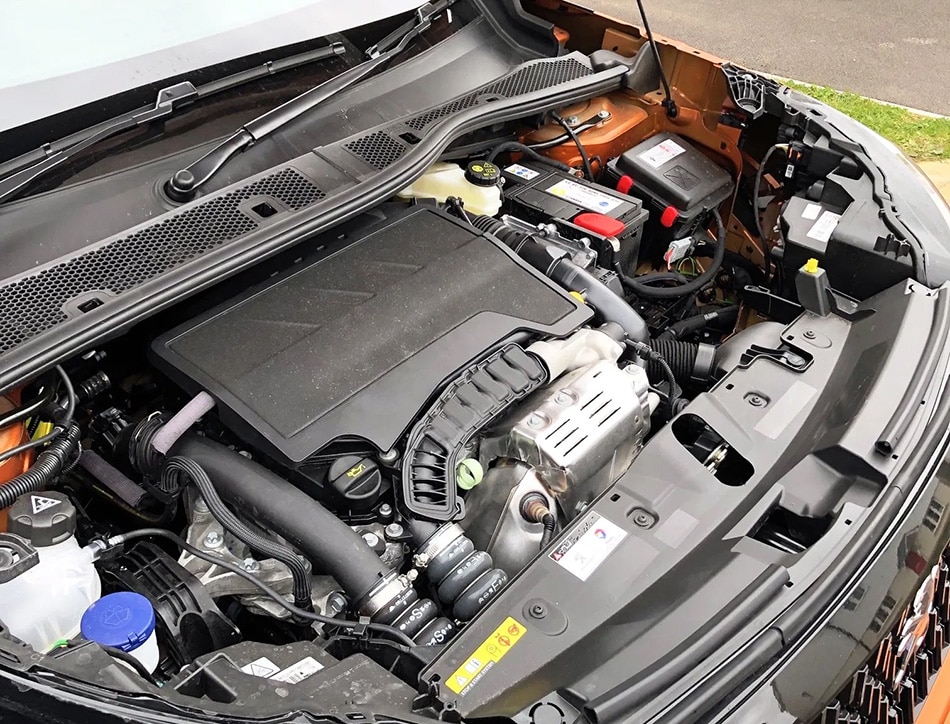 According to the official website, Peugeot 2008 will be powered by a 1.2-liter turbocharged 3-cylinder petrol engine that sends 131 horsepower (hp) and 220 Newton-meters (Nm) of torque to the front wheels via a 6-speed automatic transmission.

It has McPherson strut suspension up front and a torsion bar coil spring set up at the back. The vehicle features four-wheel disc brakes with Anti-Lock Braking System (ABS), Electronic Brakeforce Distribution (EDB), and Brake Assist (BA) technology.

According to a road test done by whatcar.com, 2008 provides an overall fuel economy of around 13 kilometers per liter. 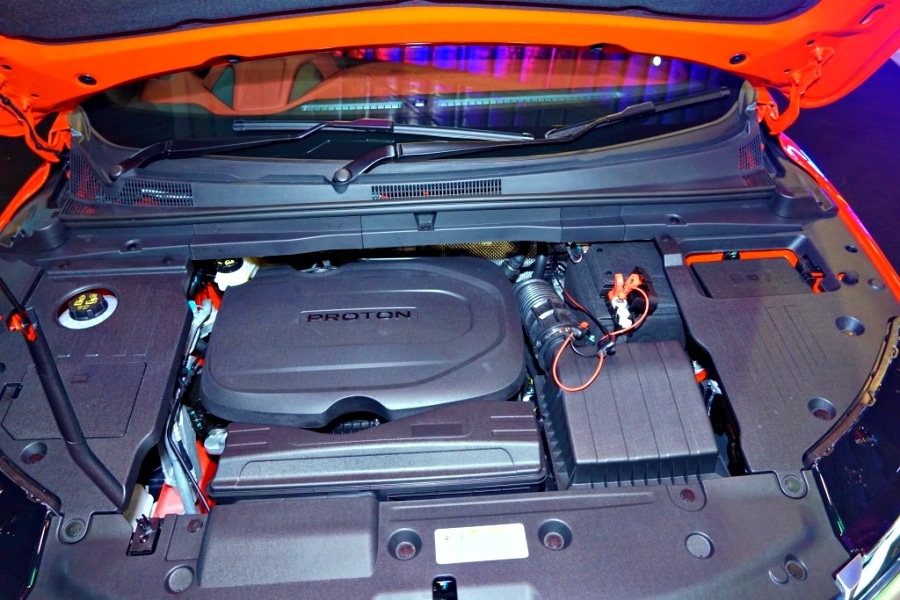 In Malaysia, X50 comes with 2 main powertrains. The one offered in the Standard, the Executive, and the Premium trims, is a 1.5-liter turbocharged 3-cylinder petrol engine that makes 148 hp and 225 Nm of torque. All of that power is sent to front wheels in all trims via a 7-speed Dual-Clutch Transmission (DCT).

The other option, which is offered in the Flagship trim only, is a 1.5-liter turbocharged 3-cylinder petrol engine that makes 177 hp and 250 Nm of torque and is mated to a 7-speed DCT gearbox.

Like 2008, X50 has a McPherson struts suspension up front and a torsion bar coil spring set up at the back. It also has four-wheel disc brakes with ABS, EDB, BA technology.

According to a road test done by wapcar.my, X50 provides an overall fuel economy of around 10 kilometers per liter.

This comparison is between the top variants only to see the complete range of features that these vehicles offer. The following are the specs and features of both SUVs:

Lucky Motor Corporation Limited is offered the Peugeot 2008 as a premium subcompact SUV with a price tag between Rs. 5.25 million and Rs. 5.85 million.

While Proton X50 is no slouch, Al-Haj Automotive is known to keep its prices relatively lower than the competition. That said, X50 is likely to be priced around Rs. 4.5 million.

In terms of features and performance, both vehicles are almost equally matched. However, Peugeot 2008 is likely to draw more interest because of its early arrival, amazing looks, and better brand recognition compared to Proton X50.