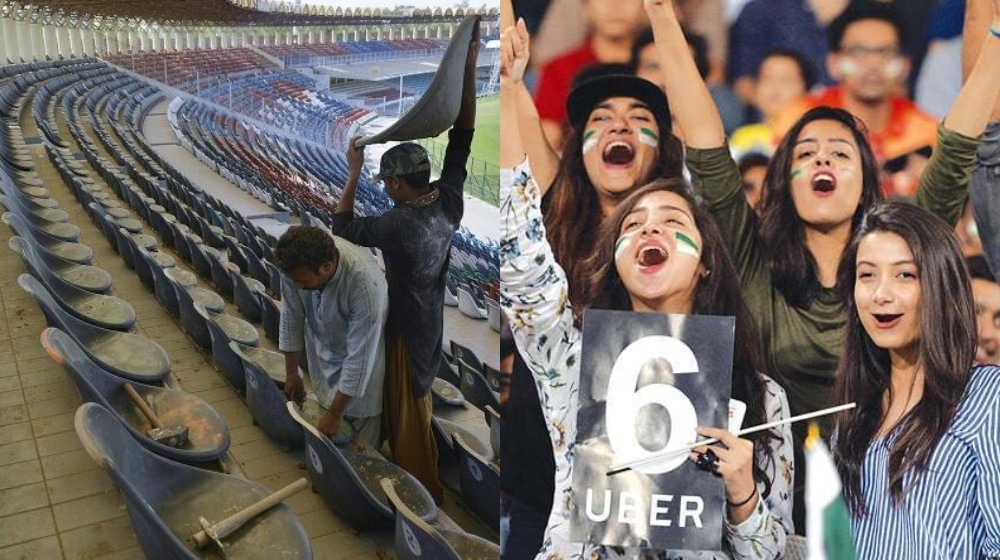 It’s been almost a quarter of a century since the Australian cricket team last toured Pakistan. Just to put that into context, their previous visit coincided with ‘Titanic-mania’ when every shop and household in Pakistan was blasting out Celine Dion’s “My Heart Will Go On” from the movie soundtrack, (sing along if you remember the lyrics). Incidentally, for those of us old enough to remember a time before Soundcloud and Spotify, it was also the year that the MP3 player was first introduced to the music-loving public.

1998 was a significant year for Pakistan for another reason, too. While the Pakistani cricket team took on the Australians on the playing field, Pakistan as a nation joined the exclusive nuclear club and entered the arms race with a bang (pun intended!). The first nuclear weapons were tested by Pakistan as a deterrent to neighboring India’s own nuclear ambitions.

While our cricketers took on the Australians, the nation’s leaders loudly announced to the world that she was ready to defend herself against any foreign aggression or threats. A move, incidentally, which, for reasons too well-rehearsed elsewhere to go into here, was yet another weapon used by detractors to pummel Pakistan’s already (unfairly) tarnished reputation.

We Pakistanis understand that Pakistan can be – should be – better, but we also recognize that no country is perfect and that it is only through acknowledging our deficiencies that we can improve.

And now the Australians are finally back. Cricket-mad Pakistanis are besides themselves with excitement. Tickets for the first three days of the first test match in Rawalpindi have already sold out. But, in this writer’s opinion, this tour represents far more than just a return to international cricketing normalcy.

What we should be most excited about is the image-building (image-restoring is, perhaps, more apt) opportunity for Pakistan that this visit represents.

In 2009, when terrorists attacked the Sri Lankan touring side in Lahore, it was an attack on Pakistan’s greatest love – cricket. When the international cricketing community effectively turned its back on Pakistan, it felt like hate had won and that Pakistan would never recover from such a catastrophic blow. Since that fateful (and fatal) day in Lahore, Pakistan has struggled to attract international visitors.

Pakistanis still praise the bravery of the Zimbabwe team who were the first international side to ignore the prevailing negative impressions of Pakistan and visit the country in 2015. Since then, others have followed in their footsteps, but it is Zimbabwe who will forever be remembered as the team that stood with Pakistan and put cricket above propaganda.

It was only through persistent diplomatic efforts, coupled with a renewed vigor to eradicate the terrorists who were bent on destroying Pakistan, that slowly, ever so slowly, the international community started to consider restoring Pakistan as a tour destination. The patience and hard work of diplomats, sportsmen and the cricketing authorities should be applauded. These efforts have culminated in the arrival of the Australian team on a six-week tour. With their arrival, happy days, as the song goes, are finally here again.

The security bubble in which the Australian squad has been enveloped is unprecedented. Around 4000 police and military personnel have been deployed to protect the visitors in what has been described by an Interior Ministry spokesperson as “Head of State level security”. Snipers will be strategically positioned on the route the team takes from their hotel to the stadium, and shops and offices have been ordered to close on match-days for additional security. This is not an ideal situation in which to play cricket, but nobody doubts its necessity.

Despite the efforts of detractors (more on this later, but – spoiler alert – it’s the usual suspects!), the rehabilitation of Pakistan as a mature and focused nation, and as a cricket hosting country continues unabated. Australia is, undoubtedly, the most high-profile team to tour the country since the 2009 terrorist attack and the subsequent ban on international cricket being played in Pakistan.

That infamous day was a dark one not just for Pakistani cricket lovers, but for all Pakistanis. The country was in the midst of an existential fight against extremists who had vowed to destroy everything that Pakistan stood for.

This is not an ideal situation in which to play cricket, but nobody doubts its necessity.

Pakistan still remains, in some quarters, – and not just in cricketing circles – a pariah State. Despite the devastating losses incurred because of her unstinting role in the fight against terror and despite the massive disruptions to all walks of Pakistani life, those who wooed us as allies still do not, now that their attentions have moved elsewhere, fully accept Pakistan as a trustworthy associate.

Diplomatic efforts and new strategic international and regional alliances are helping to shore up Pakistan’s credentials as a mature member of the comity of nations. But there is still a long way to go. And this is why this current cricketing tour is so vital to Pakistan’s image-building efforts. Because changing the narrative and re-building Pakistan’s image is, in this era of constant media scrutiny, no longer a luxury, but a vital necessity.

Throughout my time in Pakistan, I have met with foreign diplomats and embassy staff who, before they arrived here, had imagined Pakistan to be a devastated war-torn country, beset by terrorists lurking on every corner and hostile to all foreigners. Imagine their surprise, then, when they found, instead, a peaceful country, complete with beautiful vistas and open-air cafes that would not look out of place in the streets of Paris or Manhattan. The real Pakistan left an indelible impression. These visitors would leave with positive memories of Pakistan and its people, the food, the music and, yes, Pakistanis’ love for their country.

Most importantly, perhaps, they left remembering how ordinary Pakistanis, through their goodwill and innate sense of hospitality were the nation’s greatest advocates who, through their actions, helped to correct all the misconceptions that existed in the minds of those who only saw ‘bad news’ on international media.

This is an opportunity that Pakistan cannot afford to miss and this is why so much effort is being expended to ensure nothing happens to mar the stay of these potential advocates. The security services have a difficult job ahead of them. Even more difficult will be the role of the protocol officers who will have to ensure that the Australians, when they do return home, leave with a lasting positive impression of the country and its people.

Time to say goodbye. Truly always leave a little piece of my heart at @thePSLt20 each year. What a season ❤️ Thank you SO much for opening your hearts to me and making me feel so welcome. 🥰 pic.twitter.com/AycFKVWKU8

Unfortunately, but perhaps inevitably, this current tour is still contextualized by the terrorist atrocity in Lahore (this article, for example!). Any analysis of the relative prowess of each side on the pitch is juxtaposed with images of the attack against the Sri Lankan team. Over time, normality is returning, however, and with each visit, references to 2009 will become fewer and fewer.

What is vital, however, is that nothing is done to mar this visit. Some have already tried. In a repeat of the tactic used on the visiting New Zealand team in 2021 – which resulted in the team pulling out of the tour – an Indian citizen has sent threatening messages to the wife of Australian cricketer, Ashton Agar. The messages, purporting to be from the terrorist organization, Tehreek-e-Taliban Pakistan (TTP), threatened dire consequences should Agar play in Pakistan.

Thankfully, Pakistani security services were quickly able to trace the messages back to the account of an employee of the Government of India and the threats have been dismissed as yet another attempt by Indians to paint Pakistan as a dangerous place for foreigners. The Australians are made of sterner stuff, however. There has been no panic or thoughts of pulling out of the tour and the Australian team seems just as excited to be here as the Pakistanis are to have them.

But Pakistan has to remain vigilant to these threats from our ill-wishers. While major efforts are made to correct negative misperceptions, enemies at home and abroad will do all that they can to sully our reputation. Vigilance is not the only need of the hour, however.

We have played on the back-foot for too long. Our ambassadors – official and unofficial – play more of a firefighting role, when they should be actively changing the narrative through pro-active media engagement. When haters promulgate negative stories, these ambassadors have no choice, but to react and defend Pakistan, leaving them scant room to play on the front-foot and talk about all the positive strides being made in a variety of arenas.

Image-building, reputation management, PR – call it what you will – has to be part of a determined, coherent strategy. It is the responsibility of our leaders to develop this strategy and take the positive message of what Pakistan really is to the world and let them see the truth. No such strategy currently exists, as far as this author understands, but it is high time one was created.

It is, similarly, the responsibility of all Pakistanis, wherever they are, to be ambassadors for our nation.

Pakistanis will talk ad nauseam about all that is wrong in Pakistan, but they will always – ALWAYS – defend the nation’s reputation against those who wish us ill. We Pakistanis understand that Pakistan can be – should be – better, but we also recognize that no country is perfect and that it is only through acknowledging our deficiencies that we can improve.

So what if the Australian visit isn’t perfect? No tour of any country ever is. Some of the visitors may get food poisoning from a dodgy biryani. Others may be homesick or not adjust well enough to the climate. But in terms of how they are treated by the Pakistanis they come into contact with, I can confidently say that they will leave with a positive impression of Pakistan that will stay with them forever. That is how we will restore Pakistan’s image: by being hospitable and welcoming, passionate about our team and our country and, above all, just by being ourselves.