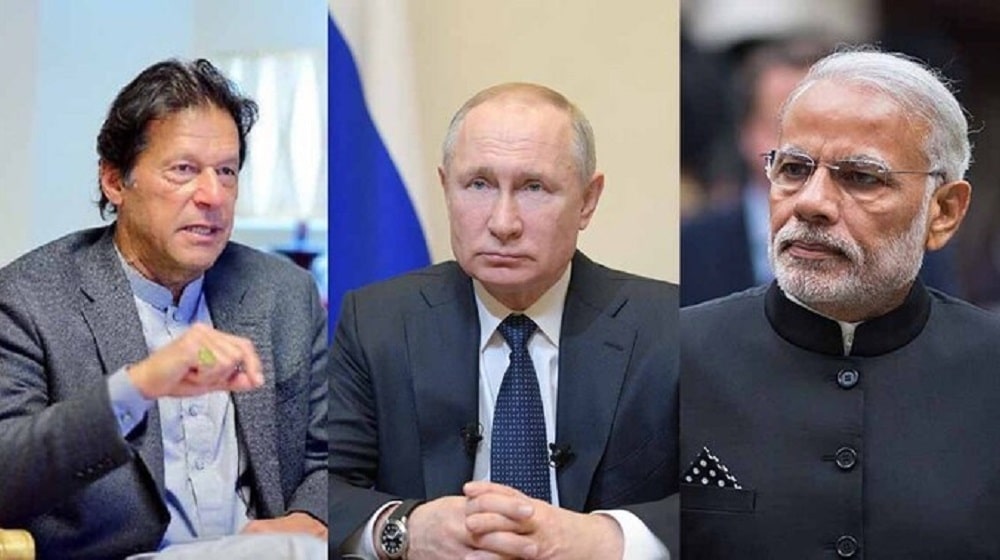 In a rare occurrence, Pakistan and India find themselves on the same side: unfortunately, neither is quite sure what that side is. Both nations are confronted with the unenviable choice of siding with their allies within NATO over the conflict in Ukraine, or risk alienating Russia.

The current strategy adopted by the two countries is to firmly sit on the fence and hope the issue resolves itself. But this is clearly untenable in the long term and depending upon how long the conflict lasts, becomes more difficult every day.

India’s relations with Russia go back much further than the nascent ties Pakistan is establishing with Russia. During the cold war period, while Pakistan and the US stood united against the Soviet Union, socialist-leaning India was inextricably tied to the Soviet Union.

With the fall of communism, and as new geopolitical pressures demanded a shift in alliances, India has found herself gravitating towards the United States – in part, due to their shared rivalry with China. India remains linked with Russia, however, in many areas – Moscow has repeatedly abstained on the Kashmir issue at the UN and, perhaps most crucially, Russia is India’s largest arms supplier.

Pakistan’s interests, meanwhile, mean that the tightrope they are walking is similarly precarious. Despite sporadic hiccups, Pakistan and the US remain firm allies with their strategic interests aligning in many areas. However, Pakistan’s regional interests and aspirations for future economic growth dictate that they must continue to woo two countries with whom America’s relations are less cordial: China, of course, but more recently Russia too has become an important partner for Pakistan.

Russia knows that turning the Pakistan screw will keep India on its toes and prevent them from moving too far into the Western camp over Ukraine.

Prime Minister Imran Khan’s recent visit to Russia on the day the conflict began in Ukraine – and his meeting with President Putin on energy cooperation – did not sit well with many international actors. The heads of several foreign missions, for example, in a departure from diplomatic norms, wrote a joint letter to the Pakistani PM this week urging him to condemn Russia’s actions in Ukraine. It would appear that Pakistan has unwittingly united the whole world on this matter!

In a list where the EU and the post-Brexit United Kingdom are united, you know you’ve done something right (or wrong, depending upon your viewpoint).

And it’s quite a list: (deep breath…) Alongside the EU and the United Kingdom, Australia, Germany, France, Greece, Italy, Hungary, Austria, the Czech Republic, Romania, Portugal, Poland, Bulgaria, Denmark, Norway, Sweden, Japan, Switzerland, Spain, Belgium, Canada and the Netherlands (phew) have all stressed in the letter that Pakistan must show solidarity with the international community – of which it now appears we are again a valued member (!) – and condemn Russia’s actions in Ukraine.

Meanwhile, over the border, the US Secretary of State has demanded similar support from India at the UN. India has now abstained on UN Security Council Resolutions condemning Russia’s actions not once, but three times. India is too canny to get too deeply embroiled on this issue but is also savvy enough to know that this is one time when playing both sides could backfire spectacularly. This is why, in a carefully worded statement ahead of the vote, their UN envoy indirectly – very indirectly, if truth be told, – asked Moscow to respect international law, while stopping short of taking a clear stand as demanded by her western allies.

India continues to have diplomatic and, more crucially, defense ties with Russia and does not want to see this relationship jeopardized. As Pakistan and Russia continue to get closer, the need for India to remain as ambiguous as possible, and for as long as possible comes into even sharper focus. Russia knows that turning the Pakistan screw will keep India on its toes and prevent them from moving too far into the Western camp over Ukraine.

Pakistan, notwithstanding the urging of the foreign diplomats based in Islamabad, knows from past history that aligning with the West will not lead to future benefits or preferential treatment once the crisis has passed – if experience is anything to go by, it’s usually the opposite, in fact.

The issue of Ukraine has polarised the international community in a way that has not been seen since the bad old days of the cold war, and this polarisation makes adopting a neutral stance even more difficult for both India and Pakistan.

India, however, knows that she has a great deal more to lose than her arch-rivals should the conflict become more prolonged and they find themselves forced into choosing a side. India needs the west to counter China. Russia will not align itself against China, and China has stayed comfortably neutral on the Ukraine issue – something that will not go unnoticed in Moscow and will, I predict, lead to closer ties between the two powers. And so, eventually, India may find itself having to jump into the western camp, jeopardizing its defense ties with Russia and be faced with a Pakistan aligned with two powerhouse nations, both of whom will not be looking favorably at New Delhi.

So, while Pakistan’s position may seem precarious upon initial analysis, the truth is that she has little to lose from staying neutral and a lot to gain should India eventually be forced to condemn Russia. Pakistan, notwithstanding the urging of the foreign diplomats based in Islamabad, knows from past history that aligning with the West will not lead to future benefits or preferential treatment once the crisis has passed – if experience is anything to go by, it’s usually the opposite, in fact.

The West has historically wooed Pakistan when the need arises, only to forget (and even disparage) her erstwhile ally once they are no longer needed. Meanwhile, the emerging relationship with Russia and their close ties with China – who brokered the meeting in Moscow between PM Khan and President Putin – is one that has huge benefits for Pakistan; perhaps more so than they currently reap through their existing alliances.

India’s foreign policy is being far more severely tested and the lack of a clear stance is not going unnoticed by the international community. So far, both countries are managing to tread the fine line they have been forced to follow. Whether this is sustainable remains to be seen. To paraphrase a famous writer:  “Sometimes we straddle two cultures (or in this case, two powerful strategic alliances); but we face the danger of falling between two stools.”

Neither is a comfortable proposition.