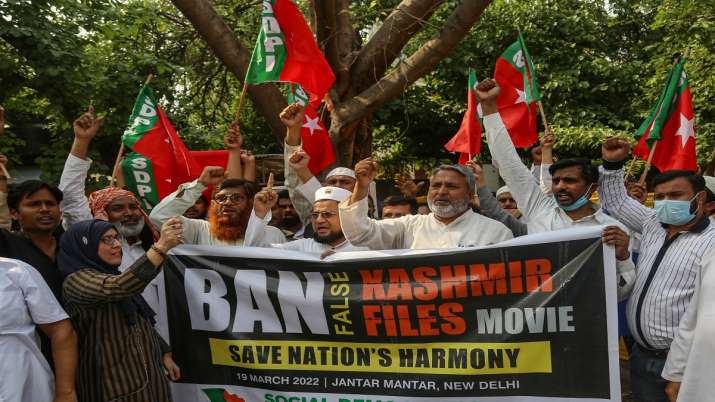 Indian filmmaker, Vivek Agnihotri, is no stranger to controversy. From his penchant for sharing false and misleading tweets to accusations against him of sexual misconduct with actresses, Agnihotri seems to spend as much time in the news for his scandals as he does for his films. As far as his film directing goes, most of his work has been universally panned by critics. In his latest offering – the luridly fantastical Kashmir Files – Agnihotri is again making headlines.

The story, for what it’s worth, is the brainchild of the man behind such cinematic flops as Dhan Dhana Dhan Goal, and Zid and centers around the forced exile of Hindu families from Kashmir in 1990. It follows their plight during the early days of the Kashmiri peoples’ struggle for independence from India.

Although Agnihotri’s garish post-truth telling of actual historical events has very little to recommend itself either in terms of technical skill or captivating story-telling, it does manage to confirm the old adage that every dog does, indeed, have its day.

The movie, starring stalwart Hindutvist, Anupam Kher, is Agnihotri’s latest effort to remain relevant and, on that score at least, he has succeeded. Although Agnihotri’s garish post-truth telling of actual historical events has very little to recommend itself either in terms of technical skill or captivating story-telling, it does manage to confirm the old adage that every dog does, indeed, have its day. Finally – primarily thanks to a generous helping of promotion and tax benefits provided by Narendra Modi and his band of merry men – Agnihotri has managed to strike box office gold. Critical acclaim, though, as ever, continues to elude him.

The story of what actually happened to the Kashmiri Pandits is, without any doubt or equivocation, a tragic one. According to authentic witness accounts of the time, pro-Indian Hindus in the valley were threatened with violence and death if they did not leave. Credible evidence has since confirmed that police informers amongst the Hindu residents had been complicit in the forced ‘disappearances’ and deaths of Muslims who were considered undesirable by the Indian State. Whatever the reasons behind the move to expel the Pandits, there is ample evidence that threats and acts of brutality, compelled many of the valley’s Hindus to flee their ancestral homeland. Many found refuge in squalid makeshift camps, where they still languish over thirty years later.

While all reasonable people agree that what befell the Kashmiri Pandits was appalling, Agnihotri abandons all sense of objectivity and honesty and takes his self-serving outrage about the tragedy to laughable depths. In any film ‘based on real events,’ a certain amount of poetic license is employed to help the narrative flow. However, Agnihotri’s use of this device has morphed seamlessly into sycophantic flummery and outright falsehoods. Ultimately, the film is little more than an over-long racist rant that wilfully ignores the background to the tragedy and instead focuses on Agnihotri’s own insecurities and ideological leanings.

Muslims in the story are portrayed as comically stereotypical sadists whose only purpose in life seems to be to commit acts of brutality against the suffering Hindu protagonists. Is it any wonder, then, that at some screenings, right-wing Hindus shouted slogans urging the murder of Muslims in Kashmir and in India? In a country already riven with communal strife, it is, at best, disingenuous of Agnihotri to claim that he was simply telling an untold story and not just fanning the flames of anti-Muslim sentiment – sentiments he has repeatedly demonstrated he shares.

Ironically – as repeatedly acknowledged by the Kashmiri Pandits – it is, in fact, the Kashmiri Muslims who have continually urged the exiled families to return, offering personal and official guarantees of safety in order to make amends for what happened in those awful days, so long ago. In a damning indictment of the Indian Government’s Kashmir policies, the Pandits have repeatedly lamented the fact that their tragedy has been weaponized to distract the world from actual atrocities being perpetrated against their erstwhile Muslim neighbors.

Ultimately, the film is little more than an over-long racist rant that wilfully ignores the background to the tragedy and instead focuses on Agnihotri’s own insecurities and ideological leanings.

Reviews have been decidedly mixed for Agnihotri’s dubious gift to the world of cinema. If one believes the Pro-Hindutva publications, one could be mistaken for thinking the film is a masterpiece in the same league as Citizen Kane. While not usually considered a cinematic luminary, no less a personage than Narendra Modi has even weighed in and attacked those who have criticized the film. The prominent BJP Minister and former President of the party, Amit Shah – yes, the very same Amit Shah who, in words eerily reminiscent of anti-Jewish Nazi propaganda, described Rohingya Muslims as cockroaches – has met and praised Agnihotri and his absurdly revisionist opus.

The verdict amongst more objective, well-respected critics in India, however, has been more damning. The film has been universally panned by them in embarrassingly – for Agnihotri – scathing terms. One critic slammed Agnihotri for exploiting the suffering of Kashmiri Pandits “by doing away with all nuance in service of a communal agenda.” Another reviewer described the film as “propaganda aligned with the ruling party” and as “a fantasy-revisionist rant lacking in clarity, craft, and sense.” Another critic said the film was composed of “some facts, some half-truths and plenty of distortions… aimed at inciting hatred against Muslims,” while yet another critic expressed disappointment that the film “could have been a stunning tribute to the Kashmiri Pandits’ cause, but Agnihotri’s personal opinions tank the film’s credibility”.

Of course, Agnihotri’s response to anyone who has the audacity to criticize his demented brainchild has been as unsubtle and as reductive as his political views: the critics, he screams, are all terrorist sympathizers!  While he aggressively maintains that the film tells the truth about what happened in 1990, the actual victims have derided the film as an attempt by Hindutva ideologues to muddy the waters around the genuine grievances of Kashmiri Muslims, even going so far as to accuse the Modi government and Vivek Agnihotri of cashing in on their misery.

The story, of course, needs to be told (as do, one could argue, the stories of the massacres and brutalization of Muslims in Gujrat by right-wing Hindutva mobs in 1985 and 2002). However, was Agnihotri the right person to tell this story? His anti-Muslim leanings are well-documented and he seems to have only a nodding acquaintance with truth, context, and nuance – fatal defects, surely, in a filmmaker’s bag of tricks. The story of the Kashmiri Pandits needs to be heard. As humans, it is our duty to listen to their stories and learn from them. But one cannot help but feel regret that an opportunity to heal has been squandered by racist Hindu extremists’ hijacking of the tragedy to further their own political interests.

And what of the Kashmiri Pandits, themselves? Today, they continue to live in squalid refugee camps, their pleas for help consistently ignored by the BJP government that claims to care so much for their predicament. They are on record as saying that the only reason they still languish in such degrading conditions is so that the government can roll them out when required as a visual representation of the Hindutva narrative which argues that Muslims are out to destroy Hinduism.

The real story, however, – one that has been effectively buried underneath layer upon layer of falsehoods and misrepresentations – is that for the past 32 years, the Kashmiri Pandits have been betrayed: betrayed by the very people they looked to for help.

The Kashmir Files is a series of deceitful vignettes aimed at perpetuating a false narrative that villainizes all Muslims. The real story, however, – one that has been effectively buried underneath layer upon layer of falsehoods and misrepresentations – is that for the past 32 years, the Kashmiri Pandits have been betrayed: betrayed by the very people they looked to for help. Their tragedy had its genesis in policies aimed at subjugating and brutalizing the people of Kashmir – an attempt that spectacularly backfired. Because of these policies, the Indian Government sowed the seeds of their tragedy and contrived a way to force an unnecessary conflict between two communities that had co-existed peacefully for generations.

The Kashmir Files is an ill-conceived diatribe that does what it intended to do: pander to Hindu extremists who are less interested in the truth than they are in perpetuating anti-Muslim tropes. The movie, in all its misrepresentative glory, is an ode to hatred – a paean, if you will, to a hateful ideology. Ultimately, it is nothing more than a blunt instrument placed in the hands of dull-witted audiences.

Mission accomplished. Vivek Agnihotri and his even duller-witted patrons must be very proud of themselves.