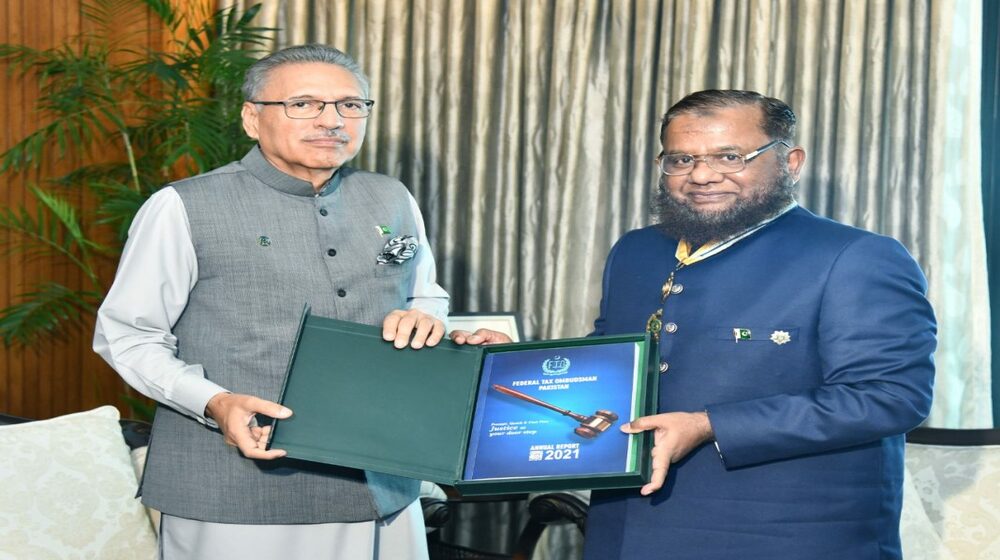 President Dr Arif Alvi Thursday called for the increased outreach of the Federal Tax Ombudsman (FTO) to create awareness about its role in providing speedy justice for complaints against maladministration of the customs and tax authorities.

He made these remarks while talking to FTO Dr Asif Mahmood Jah, who had called on him at Aiwan-e-Sadr, and added that the FTO is doing an outstanding job by providing speedy relief to traders and businessmen against the highhandedness of government authorities.

Dr Jah presented the Annual Report-2021 to highlight the performance and achievements of the tax Mohtasib. He said that 2,816 fresh complaints were registered with the FTO during 2021 and 333 carry forward cases from the previous years had also been processed. Of these, 2,867 cases were disposed of during 2021 and 88.14 percent of the decisions have been implemented by the concerned quarters.

The Ombudsman has also decided to refund claims amounting to Rs. 8,499.11 million, and the amount was paid to aggrieved taxpayers by the FBR, he added.

He mentioned that the FTO had started informal resolution of complaints in priority cases under Section 33 of the FTO Ordinance, 2000 to facilitate taxpayers and expeditiously resolve complaints.

The FTO also highlighted that the Ombudsman has provided a Sales Tax refund of Rs. 600 million to over nine thousand buyers of vehicles by declaring the collection of Sales Tax in excess of 12.5 percent from the complainants as contrary to law.

Dr Jah informed the President that the FTO has established facilitation desks at the international airports in Islamabad, Karachi, Quetta, Lahore, and Peshawar, and the land border stations of Chaman and Torkham to facilitate traders and businessmen.

He further apprised the President that with the assistance of trade bodies and associations, the FTO is conducting seminars and awareness sessions throughout the country to create awareness about its role in providing prompt and cost-effective justice against the maladministration of tax authorities.

President Alvi expressed his satisfaction with the performance of the FTO in the provision of swift justice to complainants in the far-flung areas of the country.