Pakistan is looking at a massive foreign debt of $6.4 billion that is due over the next three years, as reported by Bloomberg.

While the country is under incredible pressure to keep the economy running and avoid a sovereign default, it needs around $3.16 billion to pay dollar debts and loans in the current year, $1.52 billion next year, and $1.71 billion in 2024. 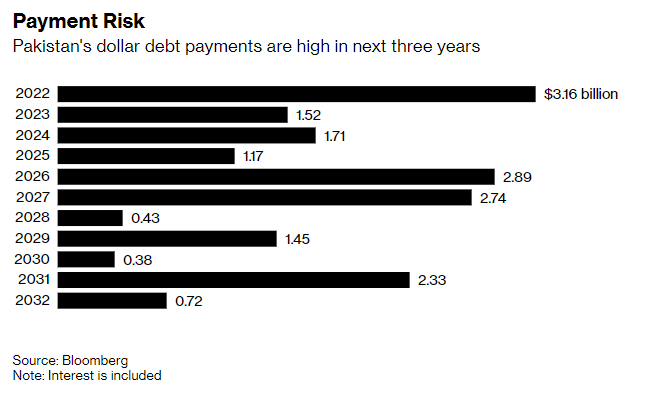 Bloomberg’s data indicates that Pakistan faces the prospect of default for the second time in its history, with a $45 billion trade deficit in the ongoing fiscal year and depleting forex reserves offering less than two months of imports.

Fitch Ratings expects the external debt that is due in the upcoming fiscal year to be higher. Its analyst, Jeremy Zook, commented that it (Fitch) adds bilateral debts of $3 billion payable to Saudi Arabia in time deposits and $4 billion owed to China’s State Administration of Foreign Exchange. 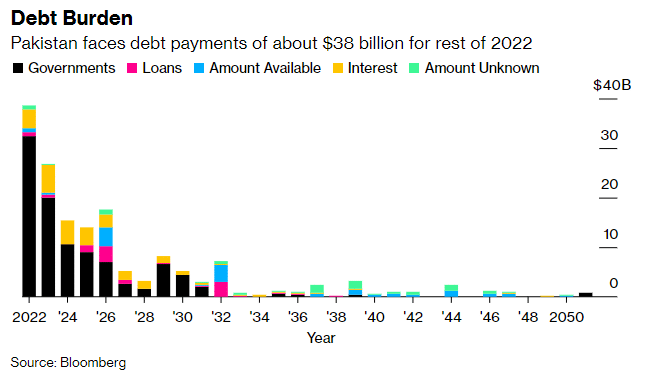 In the midst of all this, the government hiked petroleum prices by Rs. 30 per liter on Friday to satisfy a crucial bailout condition stipulated by the International Monetary Fund (IMF) to unlock the remaining $3 billion from the agency’s bailout package.

Patrick Curran, a senior economist at London-based developing markets investment research business, Tellimer Ltd., told the publication that “the resumption of its IMF program is necessary to avoid a balance of payments crisis”.

Tellimer has a buy recommendation on Pakistan’s 2031 dollar bonds that are selling at mid-60 cents per dollar and yield close to 15 percent as risks have now been substantially priced in, he added.