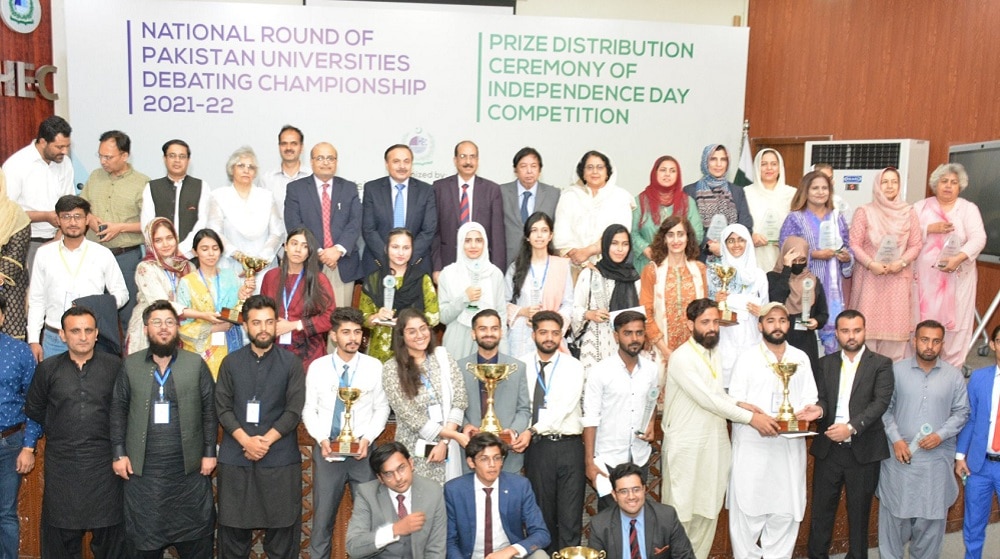 King Edward Medical University (KEMU), Lahore, and the National University of Sciences and Technology (NUST), Islamabad, have respectively won the Urdu and English debate contests in the National Round of Pakistan Universities Debating Championship 2021-22.

The national and final round of the Championship was held at HEC Secretariat, following the regional rounds held earlier in five regions of the country, including Punjab, Sindh, Khyber Pakhtunkhwa, Balochistan, and ICT/AJK/Gilgit-Baltistan.

The event was also marked by Prize Distribution Ceremony for the winners of the Independence Day Competition in four categories, viz. Poetry (English), Poetry (Urdu), Painting, and Videography.

The winners of the Debating Championship and the Independence Day Competition were awarded shields and cash prizes. The first position holders won cash prizes of Rs. 100,000, while the second and third position holders received Rs. 75,000 and Rs. 50,000 respectively.

Addressing the participants, the Acting Chairperson and Executive Director of HEC, Dr. Shaista Sohail, said that Pakistani youth have great potential and capabilities. She said that the youth bulge is a blessing for the country, however, there is a need for honing the talent of Pakistani youth. She advised the students to work hard and equip themselves with the knowledge and skills essential to meet future challenges.

Addressing the closing ceremony, Adviser (Coordination) HEC, Awais Ahmed, congratulated the winning teams and underlined that the ability to convey one’s viewpoint and communicate is a blessing that helps in every stage of life and at all kinds of fora.

Highlighting the significance of poetry, painting, and videography, he said that the skills of poets, painters, and videographers help them convey broad concepts and messages in a short span of time. He advised the students to practice tolerance and patience in their academic careers as well as in the rest of their lives.

Mr. Chohan said that HEC held the Pakistan Universities Debating Championship 2021-22 on a parliamentary style of debating in order to train the youth in the art of persuading and becoming successful speakers having technical proficiency and eloquence.