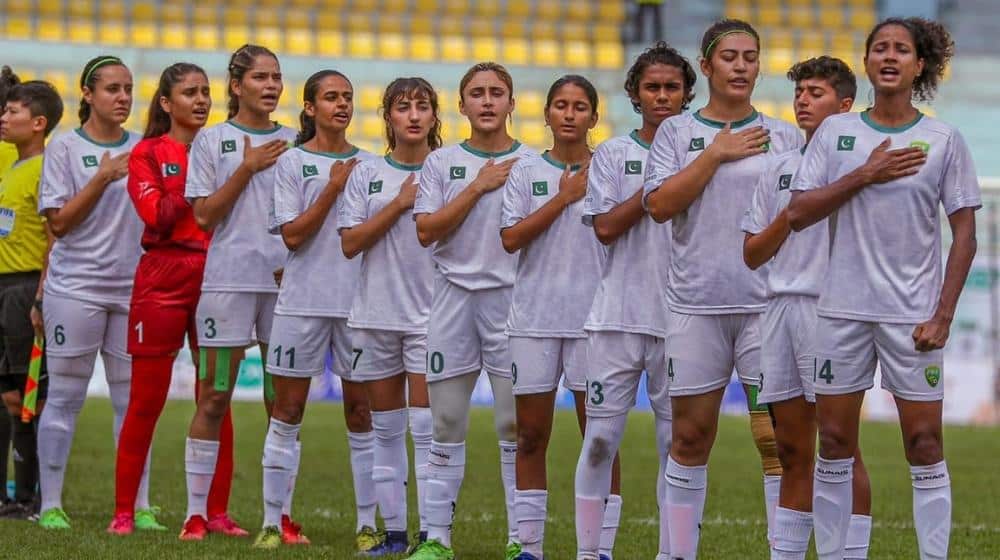 Pakistan women’s football team, soaring after their historic 7-0 win against the Maldives in the 2022 SAFF Women’s Championships, was dealt with a reality check after their arrival back home. The Women in Green, playing their first international football tournament in over 8 years, created history as they registered a convincing win in their third match of the tournament.

In what should have been a celebratory first press conference, things turned sour as a journalist asked the head coach, Adeel Rizki, about the Pakistani girls playing in shorts.

“This is the Islamic Republic of Pakistan, why did the players play in shorts, couldn’t they play in leggings?” the journalist asked.

Adeel responded to the question by stating that it is the player’s choice what they want to wear and the management had no specific requirement on what the kit should be. He said that some players put on leggings while others preferred shorts, as they felt comfortable playing in them.

The video of the press conference went viral on social media as the football fans in the country schooled the journalist for his unpleasant question.

Check out some of the best responses:

This country is a massive case of hopelessness https://t.co/kzZi6HRIqi

Did the Islamic republic of Pakistan’s journalist ever bothered to ask when money is stolen? When positions are exploited? When corruption is done? Why does all this boil down to the clothes of women? I wish them to be vocal about every wrong deed in our country. https://t.co/bdAnPMN3Xw

I bet this gentleman didn’t even watch the game or its highlights for once before attending this press-con. https://t.co/FG4lByx0ed

Its just 1 of the disgusting qs out of 1000 others that Pak women footballer face every single day.
When they play, they're not just playing, they're claiming breathing space, space for a life to live. Its not easy to live in Pak & pursue sports even on any level. https://t.co/dBRVHDr9dj

Wait till they find out 30+ other Muslim majority countries have women's football teams and players wear according to their choice (except where dress code is enforced).

Go check social media of Bangladesh WNT and you won't find such comments there. https://t.co/mGAOF4r1dh

Someone should really tell that "journalist" to lower his gaze and look up the phrase "There is no compulsion in religion".