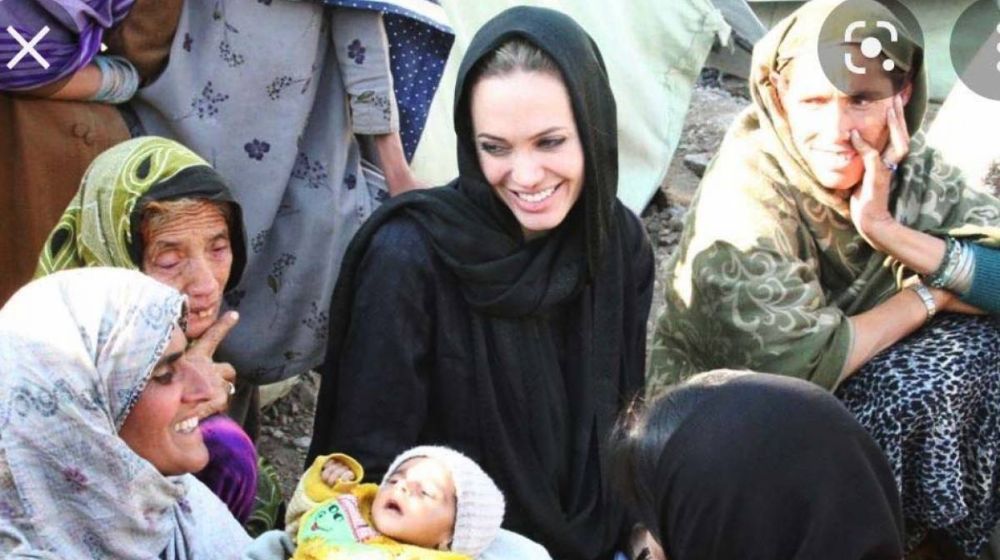 She reportedly arrived in the country a few hours ago and went to Dadu, Sindh, to meet the flood-affected families in person.

She arrived in the Zamzama oil fields via helicopter and took a boat to survey the area in Johi and its surrounding areas. Jolie is also expected to provide aid to the flood-affected people in the region.

The UNHCR Ambassador is reportedly in Pakistan to gain an understanding of the situation in the aftermath of the devastating floods that submerged one-third of the country and affected over 33 million people to communicate directly with them and to learn about their needs and the strategy to prevent such a catastrophe in the future.

It was learned that Jolie will also witness the IRC’s emergency response operations as well as local organizations’ relief operations for displaced people, including Afghan refugees.

As per a press release by the IRC, Jolie’s visit is hoped to prompt the international community — and the US in particular, which contributes the most to carbon emissions — to provide urgent support to the countries that are challenged by climate change crises.

The renowned actress plans to highlight the urgent need for support for the people of Pakistan — a nation with only a one percent contribution to global carbon emissions that has also been home to numerous Afghan refugees for over two decades.

She will observe in person how countries like Pakistan are suffering from the consequences of the climate change crisis that they had no hand in creating.

The IRC expressed their hope for the international community, especially the biggest contributors to carbon emissions, to acknowledge the intensity of the crisis and step up in support of the crisis-hit country in light of Jolie’s visit.

The Pakistan Country Director of IRC, Shabnam Baloch, stated that the climate change crisis is affecting lives and futures in Pakistan. It has a particularly serious impact on the country’s women and children. She explained that the economic crisis in wake of the floods will cause food scarcity and make women more vulnerable to violence.

“We need immediate support to reach people in urgent need, and long term investments to stop climate change from destroying our collective futures. With more rains expected in the coming months, we hope Angelina Jolie’s visit will help the world wake up and take action,” Baloch emphasized.

As per a report by the IRC, its most recent needs assessment revealed that the flood-affected people need food, drinking water, shelter, and healthcare immediately. Women needed urgent access to menstrual hygiene products, which the IRC has provided to over 50,000 people in addition to the provision of lifesaving services in Balochistan, Khyber Pakhtunkhwa, and Sindh since early July.

It has also donated emergency supplies, food, medicines, and shelter to around 950,000 individuals, according to the report.

Jolie has visited the country several times since becoming a UN Goodwill Ambassador, including her visit after the 2010 floods as well as the 2005 earthquake.