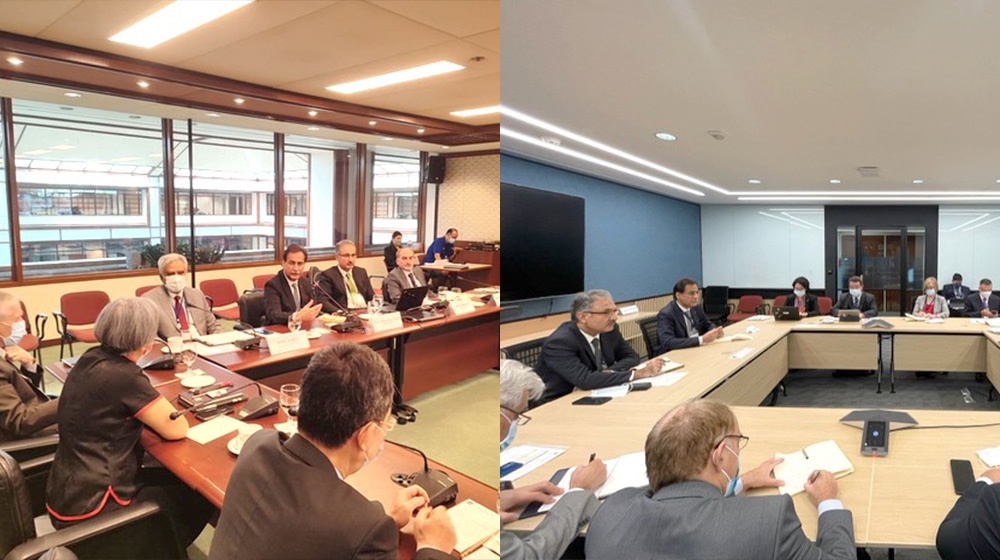 The Asian Development Bank (ADB) has assured due support to Pakistan under its US$ 1.5 billion Countercyclical Support Facility (CSF) to help the country develop and implement countercyclical expenditure measures for mitigating the impact of cumulative shocks on the economy.

The lender has also agreed to repurpose and enhance ADB’s assistance for Pakistan to support the rehabilitation and reconstruction, through ongoing reforms besides balancing a mix of the project mode of financing and program lending.

A high-level Pakistan delegation, led by Sardar Ayaz Sadiq, Federal Minister for Economic and Political Affairs, held a series of meetings with the senior management of the Asian Development Bank (ADB) at the 55th Annual Meetings of the Multilateral Development Partner in the Philippines yesterday. Other Members of the Pakistan delegation including Secretary Dr. Kazim Niaz, Executive Director ADB, representing Pakistan, Noor Ahmed, and high-ranking officials of Economic Affairs and Finance Divisions also joined the meetings.

During the meeting with the Asian Development Bank Group, Masatsugu Asakawa, the President, shared his condolences with the Minister for the loss of precious lives in the recent devastating floods and assured ADB’s support in relief, rescue, and rehabilitation efforts.

He also praised the government’s ongoing reform efforts, particularly in the power, governance, and financial sectors, that would possibly allow Pakistan to unlock its growth potential and help faster recovery from the devastation caused by the floods. The President assured ADB’s continuous support to the Government of Pakistan at this difficult time.

Minister EAD, while appreciating ADB’s support to Pakistan, assured that the present government is committed to implementing reforms in key areas of economy and governance. He also extended the Prime Minister of Pakistan’s invitation to President ADB to visit Pakistan to witness the devastating effects of the recent floods.

Sadiq appreciated the ADB’s management for fast-tracking the proposed US$ 1.5 billion Countercyclical Support Facility (CSF) to help the government develop and implement countercyclical expenditure measures for mitigating the impact of cumulative shocks to the Pakistan economy.

Chen assured due support to Pakistan under this initiative and said that the Asian Infrastructure Investment Bank (AIIB) has also committed to co-finance an additional US$ 500 Million under the CSF. Chen, while responding to a proposal from Sadiq, amenably agreed to repurpose and enhance ADB’s assistance for Pakistan to support the rehabilitation and reconstruction, through ongoing reforms besides balancing a mix between project mode of financing and program lending, after the results of Post Disaster Needs Assessment being jointly conducted by ADB, World Bank, and the UN agencies. On the sidelines of the Annual Meeting, the delegation also held various bilateral meetings with various Governors of ADB member countries.

Moreover, the Pakistani delegation organized a roundtable meeting with the ADB Executive Board members, which was attended by 9 Executive Directors, representing more than 40 countries. The Secretary EAD made a comprehensive presentation on the catastrophic floods that have devastated Pakistan, the government’s immediate response & relief measures, and future challenges emanating from the situation.

He also highlighted the role played by the National Disaster Management Authority, National Flood Response and Coordination Centre, Armed Forces, Provincial Governments, International development partners, and the non-government and civil society organizations in the process. Secretary EAD stressed to the Board members the need to focus on post-flood reconstruction and rehabilitation without compromising the development needs of the country. He also emphasized the need for focusing on Climate-resilient Infrastructure development for power and communications, housing, education, and health sectors.

Sadiq also apprised the Board members about the difficult decisions taken by the present government in areas of taxation and energy reforms, and the removal of subsidies while supporting the poorest of the poor through cash transfers like Benazir Income Support Program. The Board Members, while sympathizing with the people of Pakistan assured their full support in the reconstruction efforts and explored avenues to further enhance the ADB interventions in Pakistan.