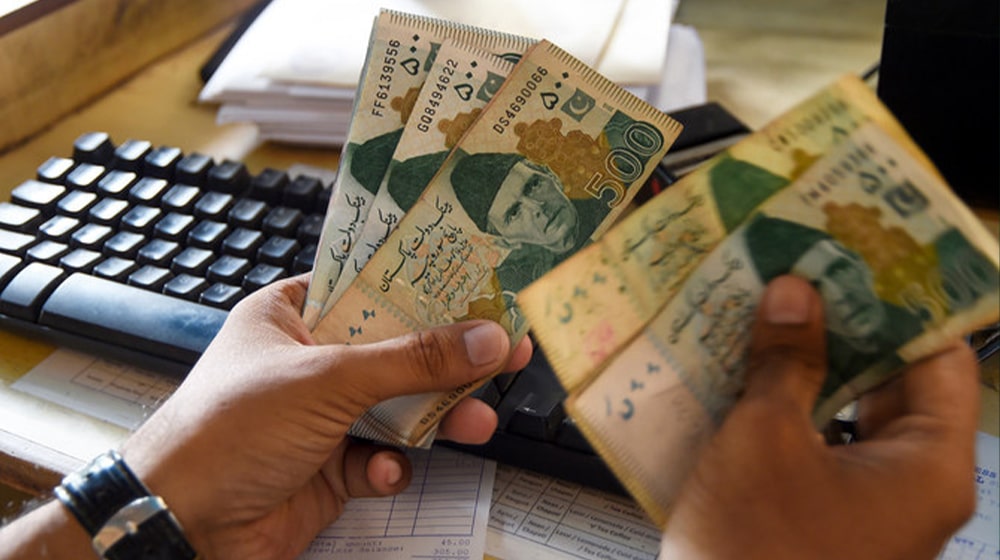 The Pakistani Rupee (PKR) gained further against the US Dollar (USD) and posted more gains during intraday trade today.

It appreciated by 0.51 percent against the USD and closed at Rs. 227.29 after gaining Rs. 1.16 in the interbank market today. The local unit quoted an intra-day low of Rs. 228.75 against the USD during today’s open market session. 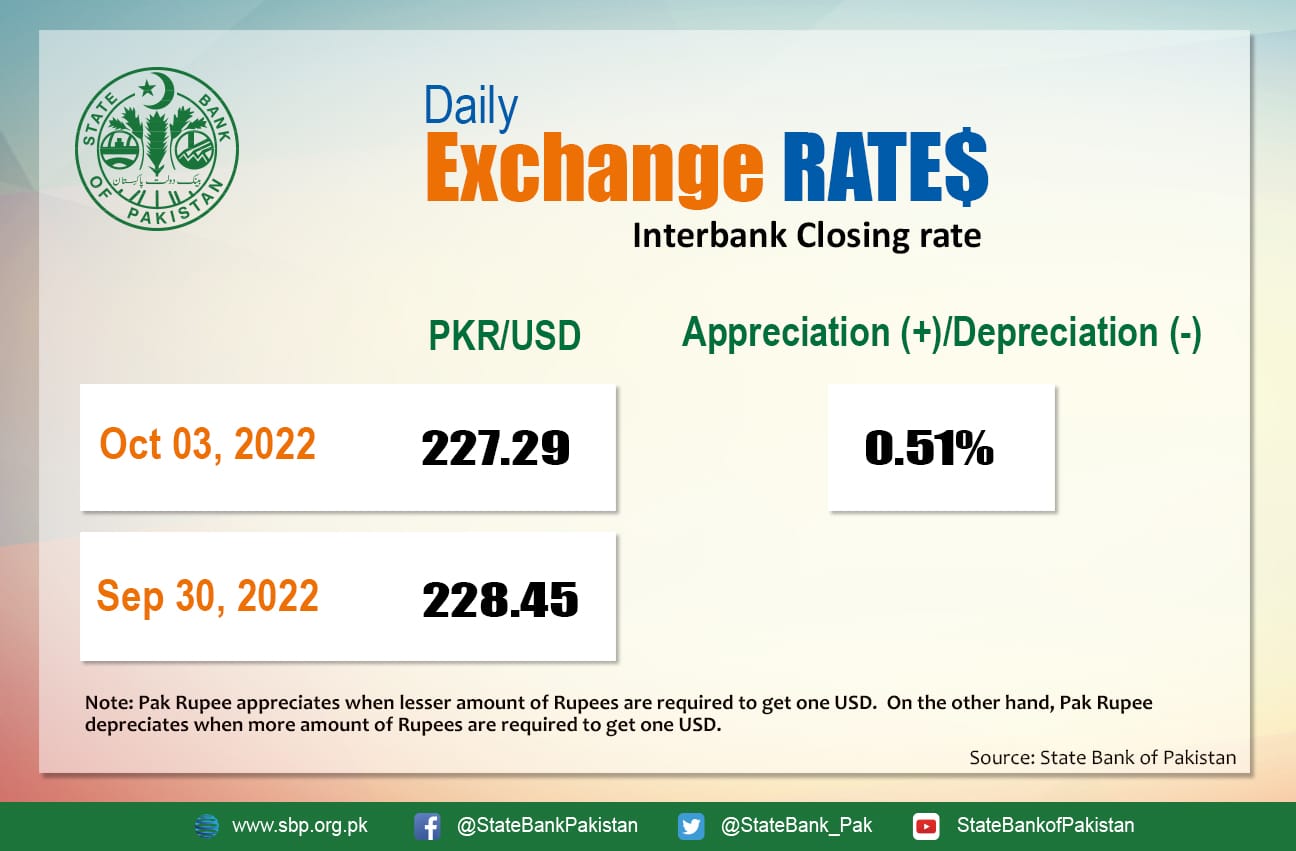 The local unit was stable on the opening bell and was trading at 227.65 at 10 AM. By midday, the greenback went as low as 228.25 against the rupee. After 2 PM, the local unit stayed at the 227 level against the top foreign currency before the interbank close.

The rupee continued its scintillating run against the dollar for the seventh consecutive day today. Currency speculation appears to have decreased for now, and trends appear to defy market expectations following Ishaq Dar’s appointment as finance minister.

On Saturday, FM Ishaq Dar said, “Appreciation of the US dollar against Pak rupee is the mother of all evils. Its appreciation against the rupee is artificial and I am telling you that the actual value of the rupee has been manipulated”.

Experts have noted that fuel and electricity prices are moderating, while September inflation was measured at 23.2 percent compared to forecasts of 27 percent. Money changers expect the PKR to continue its positive run and come down to Rs. 200-205 level.

Globally, oil prices rose more than 4 percent after the Organization of the Petroleum Exporting Countries and its allies, known as OPEC+, said it would consider reducing output.

Since June, oil prices have fallen for four months in a row as COVID-19 lockdowns in top energy consumer China hampered demand while rising interest rates and a strengthening US dollar weighed on global financial markets.

A global lead for energy at an investment research firm told Reuters, “The backdrop for this week’s meeting is precarious, but the fundamentals of oil are relatively healthy. The two biggest question marks are the demand outlook (especially in China) and what happens to Russian supply after the EU ban goes into effect on December 5”. 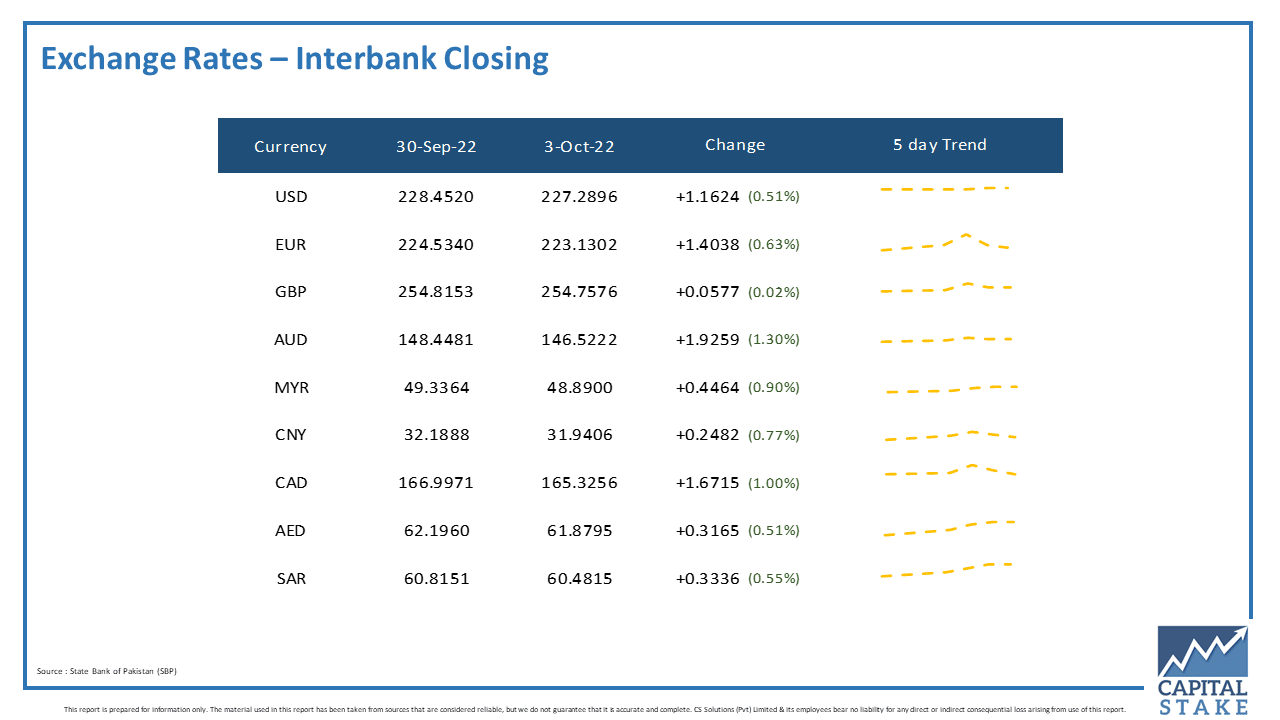 Moreover, it gained five paisas against the Pound Sterling (GBP), Rs. 1.92 against the Australian Dollar (AUD), and Rs. 1.40 against the Euro (EUR) in today’s interbank currency market.