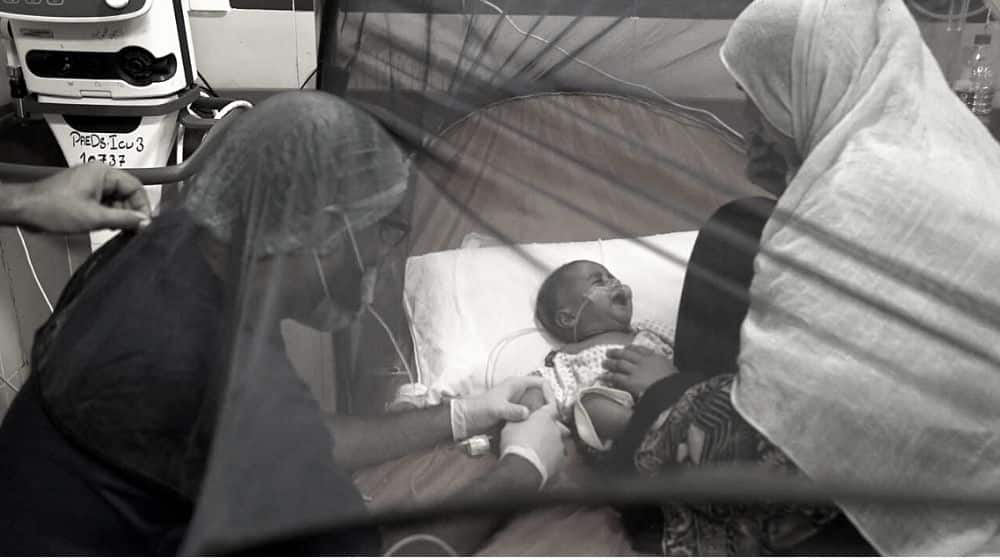 When the flooding hit it was from the very start clear an abundance of water and people left without a house or shelter would mean a serious spike in mosquito-borne diseases like malaria and dengue fever.

The flooding that hit Pakistan this year was – and continues to be – devastating on so many levels, to individuals and families who lost their livelihoods and houses, farms underwater with crops and livestock lost, and industries put on their heels.

This co-incited with increasing fuel and food prices and international markets seeking refuge in the American dollar further adding to inflationary pressures in almost everywhere else. Just like the waters seem endless and unyielding as does this multitude of challenges facing the Pakistani people and its leaders.

I have worked in Pakistan for almost ten years and have never thought of it as the most predictable and easiest of places but have come to appreciate the vibrancy and curiosity of its people and as a place where things can happen at an amazing scale and pace when interests align.

This current situation and view of a prolonged period of exceptional hardship for millions of Pakistanis are truly heartbreaking. It should cause every friend of the country to double down and pull every lever to see their fate steered towards the safer ground and better times.

I work with the development and manufacturing of commodities for the prevention of malaria. When the flooding hit it was from the very start clear an abundance of water and people left without a house or shelter would mean a serious spike in mosquito-borne diseases like malaria and dengue fever.

In August and September, the number of cases was already many times higher, with hundreds of thousands of extra cases than the year before, according to World Health Organization (WHO). In October, hospitals in hard-hit areas reported a 30-fold increase in admissions of people sick from malaria, and the advances of the excellent National Malaria Program are already completely eroded.

Many more people will die from diseases following the flood than from the floods. This truly doubles the heartbreak as especially many of the deaths from mosquito-transmitted diseases are avoidable.

Initially, I had hoped that organizations put into this world and funded with the very purpose of fighting these diseases would step up and join in right now. The Global Fund approved emergency funding of an additional $18 million for the procurement of 6 million insecticide-treated nets in September to recognize “The needs in the country are urgent and severe”. These nets surely would have brought relief and would have prevented both death and disease as well as freed up capacity in overburdened hospitals in Pakistan.

Unfortunately, the sense of emergency and compassion did not extend far enough to see the nets being delivered.

Pakistan has a WHO-prequalified approved and audited manufacturer of the very same insecticidal nets. This manufacturer has already delivered more than 100 million such nets to people at risk of malaria across Africa and other malaria-prone regions, procured by international donors. Instead, The Global Fund placed the order for the nets with already busy manufacturers in India and are reportedly only due for delivery in March of next year.

Made locally, these 6 million nets would already be providing people already robbed of their livelihoods and now under assault by billions of disease-carrying mosquitoes the first line of defense. There is absolutely no doubt the decision to delay the distribution until well into next year will cause the unnecessary death of thousands and the suffering of many more.

Notably, the decision runs counter to the commitment of The Global Fund to “strengthen supply capacities at national levels” to “ensure the health commodities are available to those who need them most”. Apart from strengthening the capacity of Pakistan to help itself in the future, local production in this case would also provide jobs for thousands of workers and, in turn, improve the economic livelihoods of tens of thousands of Pakistani dependents.

The Global Fund has no issue with the quality of insecticide-treated nets made in Pakistan. The manufacturing site and the products are recommended for use by the WHO, in fact, the nets are the only such products currently listed with the national regulatory authority in Pakistan, DRAP.

I am a national in a country that is a donor to The Global Fund. The purpose of the donations of my tax payments is not to buy any specific number of commodities in this country or another but to “promote the sustainable development of communities, create jobs, ensure no one is left behind and mitigate the impact of climate change.”

It seems as if everyone’s intentions are aligned to provide the help that is so desperately needed. If the government of Pakistan needs my voice to raise attention to the fact these promises already made to its people can find their answers within its own borders, I will gladly continue to speak up back home, in Geneva or in Pakistan. But I do need Pakistan to speak up first.

Rune Bosselmann, 48, is the Director of Vegro Aps, a Danish firm specializing in vector control product development. Its technical staff has been responsible for more than fifty percent of all WHO-recommended mosquito nets ever sold, as well as the establishment of both the plant in Lahore, Pakistan, and the one in India, Shobika Impex, selected by The Global Fund for the delivery of mosquito nets into Pakistan.

Since 1999, Rune Bosselmann has worked in the field of malaria prevention. He has a business background from Copenhagen Business School and has also published several scientific papers.