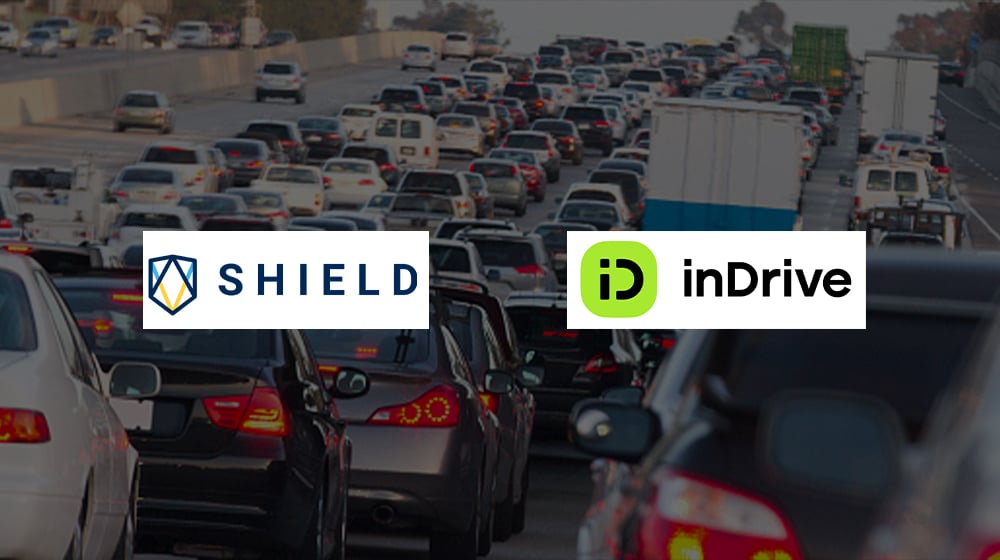 SHIELD’s technology is strengthening inDrive’s defenses against fraud and helping it achieve the highest levels of trust, transparency, and fairness for drivers and passengers worldwide.

With the second most downloaded mobility app in the world, inDrive provides for the mobility needs of users in over 700 cities and across 47 countries. Today, the inDrive app has been downloaded more than 150 million times. A people-driven business on a mission to challenge injustice, the platform uniquely empowers drivers and passengers to negotiate fair price offers based on route or other factors.

SHIELD provides industry-leading risk intelligence which eliminates injustice and unfairness by ensuring that negotiations and prices are kept transparent. Dishonest and fraudulent users are kept out of the inDrive platform, preventing them from causing issues such as unwarranted price hikes.

SHIELD’s Device Intelligence will provide the driving force for inDrive to stay ahead of ride-hailing fraud syndicates across the world. These fraud groups often use fake accounts, which can be created with tools such as app cloners, with stolen identities, or even by taking over legitimate accounts. Using app cloners, fraudsters are able to create and access multiple instances of the same app from a single device.

Fraud syndicates further scale the breadth of their fraud strategy by replicating this across a large number of devices. Fake accounts can be used to complete ghost rides – rides that do not actually happen – to quickly rack up ride completion incentives. Fake accounts can also be combined with the use of GPS spoofers to simulate high demand in one area, causing fare surges from where fraud syndicates profit.

Proactively looking to stop fraud, inDrive will leverage the SHIELD ID, the global standard for device identification that can help link fake devices created from the same physical device, which could number in the thousands. The SHIELD ID will empower inDrive to identify instances of multiple driver or passenger accounts being operated from the same device.

At the same time, SHIELD’s AI technology can pinpoint large numbers of accounts tapping on the same IP address or subnet. SHIELD’s Risk Indicators will detect the installation and activation of all malicious tools and techniques on the platform, such as GPS spoofers, tampered apps, and app cloners.

SHIELD’s Risk Intelligence does this all without the need for Personal Identifiable Information (PII), ensuring that in drive remains compliant with data protection and privacy laws around the world without compromising on security. inDrive was rapidly launching in new markets and needed to account for the diverse and distinct fraud risks. SHIELD’s Global Intelligence Network ensured that drive could stay ahead of emerging threats while catering to the unique risk profiles of each region.

Arsen Tomsky, CEO & Founder, inDrive said, “inDrive is dedicated to challenging injustice and upholding transparency and fairness in the mobility and transportation space. Our partnership with SHIELD empowers us to stay true to our mission of helping people, as well as ensuring the highest standards of trust and fairness for all while maintaining our rapid pace of growth”.

Justin Lie, Founder, and CEO of SHIELD added, “inDrive’s revolutionary price negotiation model is a breath of fresh air in the ride-hailing industry. Trust is a two-way street, and SHIELD is proud to be helping inDrive ensure fair prices and a level playing field for genuine drivers and passengers”.

inDrive is a global IT and transportation platform and is one of the world’s fastest-growing online ride-hailing services. Its services are available in over 700 cities in 47 countries around the world. The Company’s app has been downloaded over 150 million times.

inDrive, formerly inDriver, has grown far beyond ride-sharing to become a marketplace of services including intercity transportation, freight and cargo services, domestic services, job searches, and delivery. The company will continue to expand and diversify the services they offer.

inDrive is based in Mountain View, California, and operates regional hubs in the Americas, Asia, the Middle East, Africa, and the countries of the CIS, and employs over 2,400 people. In early 2021, inDrive achieved unicorn status after closing a $140m investment round with Insight Partners, General Catalyst, and Bond Capital, which valued the company at $1.23 billion.