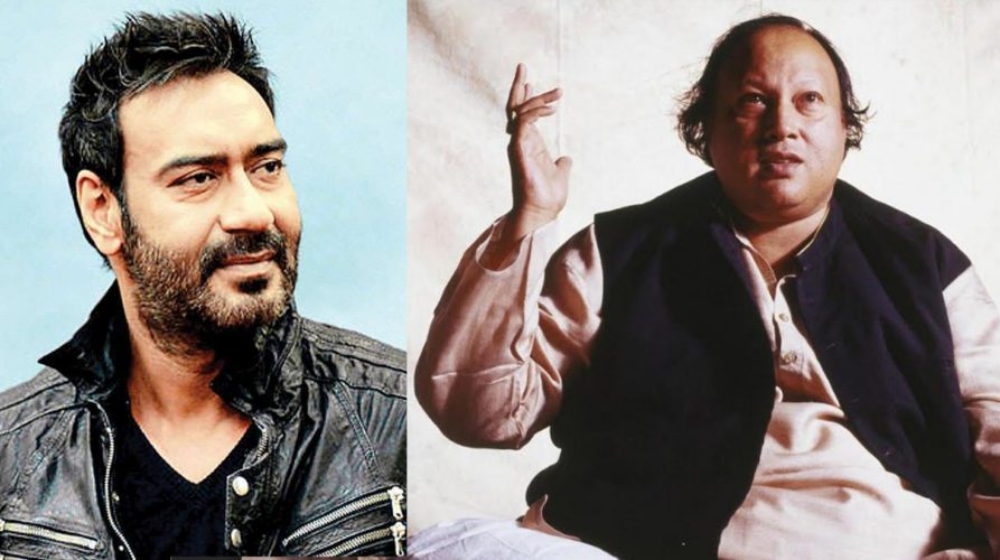 The Gol Maal actor appeared in a musical competition when he recalled the story. The judges on the show such as Neha Kakar and Vishal were left stunned by the incident.

Ajay Devgn recalled the experience between Nusrat Fateh Ali Khan and Indian lyricist Anand Bakshi. The two suffered a misunderstanding and since music was suffering NFAK decided to be the bigger man.

“Nusrat Fateh Ali, when he came to India, he was staying in a hotel and due to his excessive weight he couldn’t easily move so he sent a message to Bakshi Sahab (famous Indian musician) to visit him. The Indian musician thought that Nusrat Fateh Ali Khan has a huge ego, and he didn’t go. Instead, he penned songs and sent them to NFAK. Then NFAK would create a melody and send it to Bakshi, …. They both didn’t visit each other and the professional work wasn’t happening properly amidst this confusion, until NFAK decided to make his way to Bakshi one day. When Bakshi saw this he broke into sobs and from there onwards he stayed with NFAK to work with him.”

The Kaal actor asserted that;

The video of Ajay Devgn sharing an interesting incident about Nusrat Fateh Ali Khan when he visited India is going viral on social media.

“So Nusrat Fateh Ali Khan decided to visit Bakhshi Sahab, when he (Bakhshi) saw sheer difficulty with which Nusrat Fateh Ali was coming with the help of eight people, he got embarrassed and literally cried. He also admitted that he had a stupid ego and shifted with Nusrat Fateh Ali Sahab’s abode for a month”.

Ajay Devgn AKA Vishal Veeru Devgan is set to be seen in his production ‘Sooryavanshi‘ next. The movie cast Akshay Kumar in the titular role with Katrina Kaif as the lead. The film is the latest installment in the cop drama series that started with Singham. The previous installment of the series was titled Simbaa starring Ranveer Singh. Meanwhile, Singham 3 is also in the works.

On the other hand, he will also be seen in Sons of Sardar, from his Son of Sardar franchise.