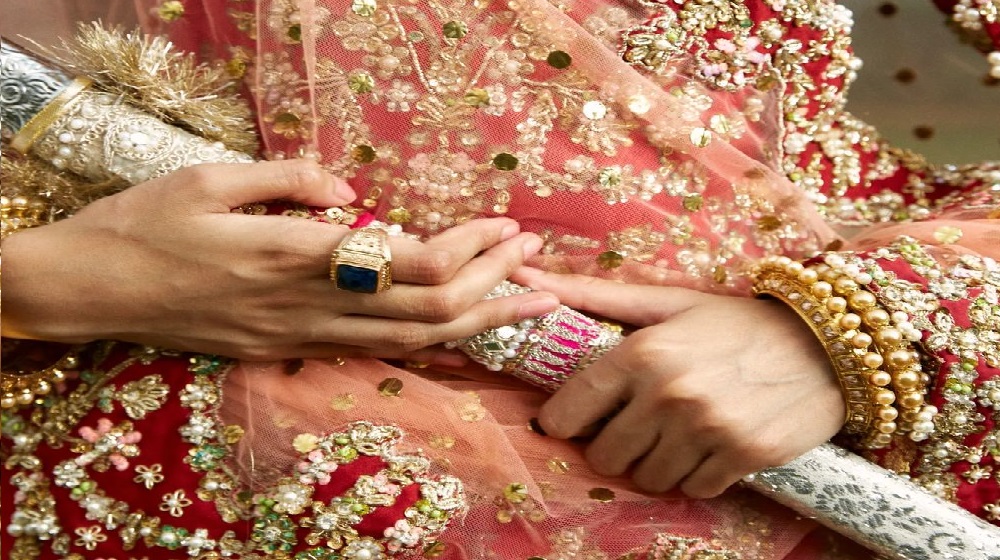 The traditional red bridal jora has been unrivaled for ages and is back this fall-winter season for the quintessential Pakistani bride. This cherry red lehenga choli, Laali, by top designer Ali Xeeshan’s Roshan Luxe Bridal Couture 2022-2023 is definitely following the trend but with a twist. 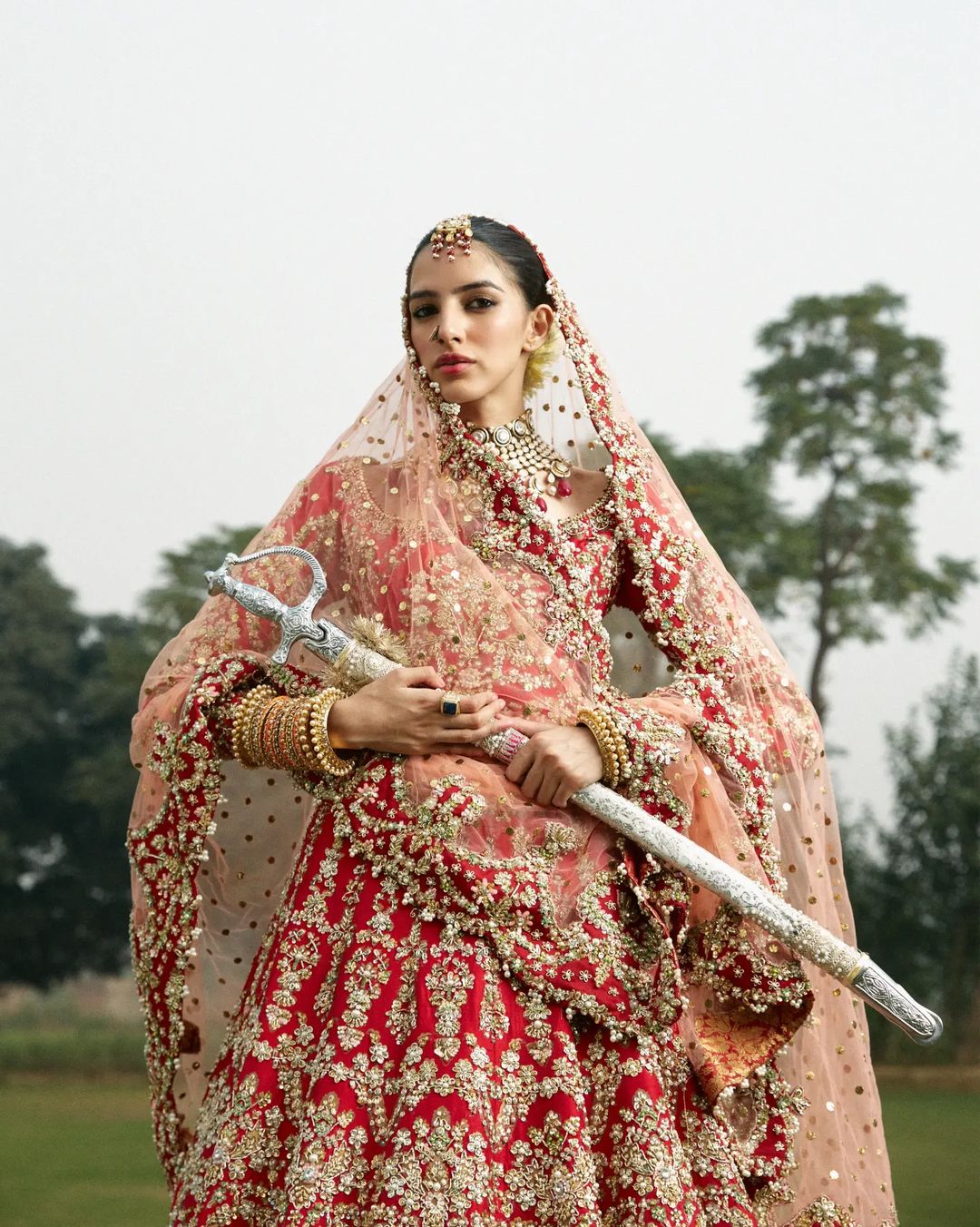 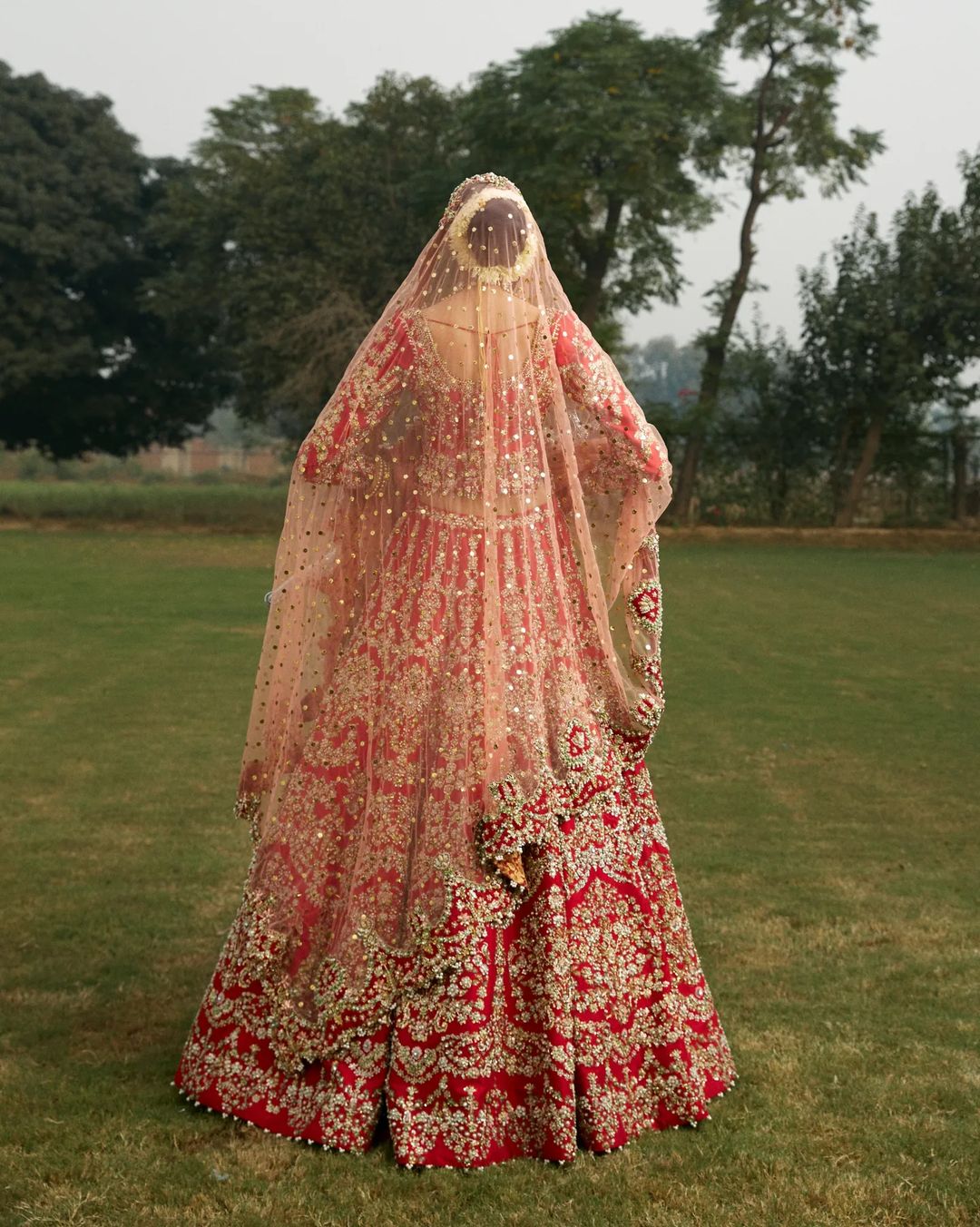 Laali appears to be an ode to the warrior princess of the Sub-continent but the most unmistakable detail is the stand-out accessory that we haven’t seen in Pakistan — a sword. Gone are the days when a woman had to have ‘her honor’ passed from her father or brothers to her husband to ‘protect’. A woman by herself is enough to preserve and defend her honor. 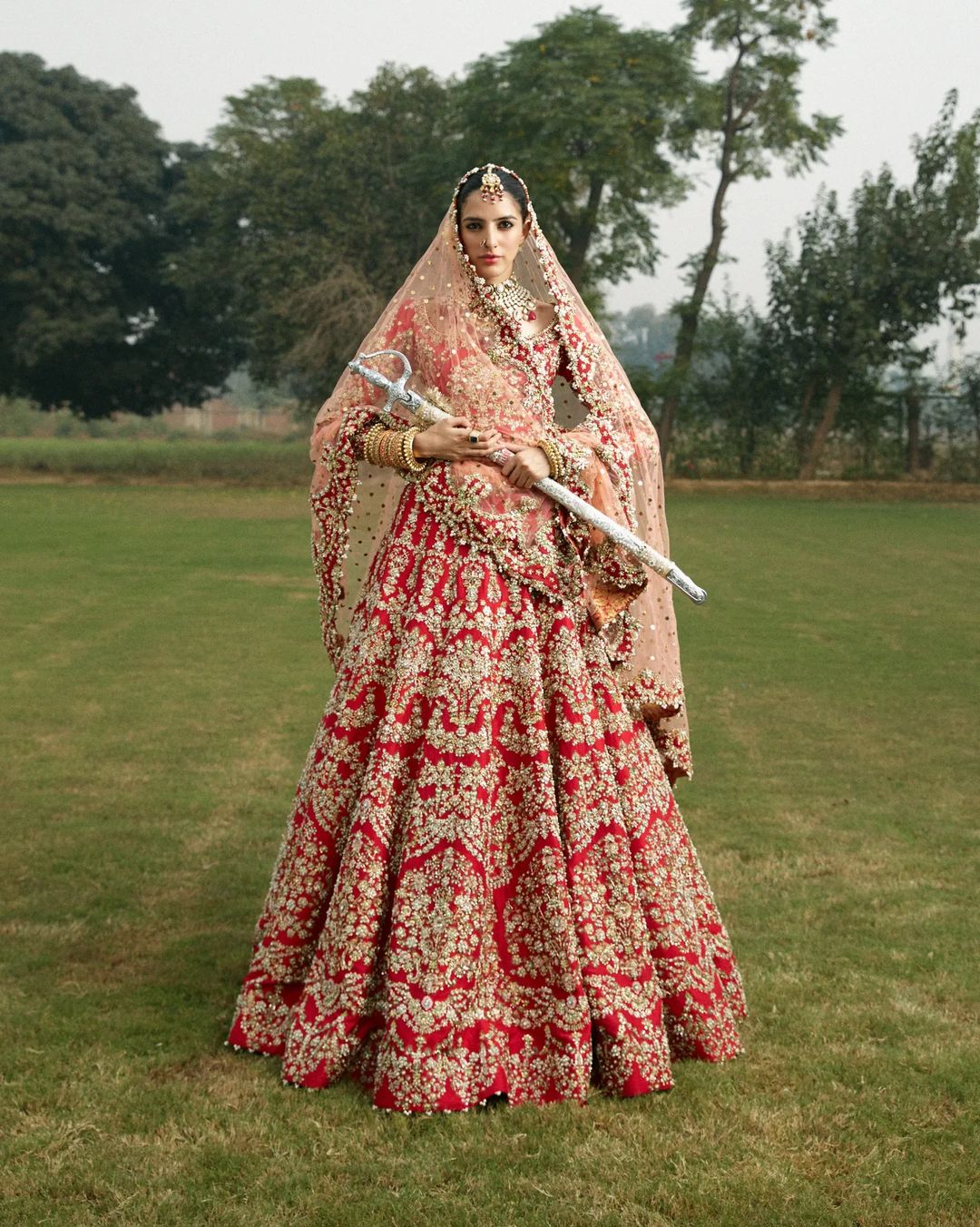 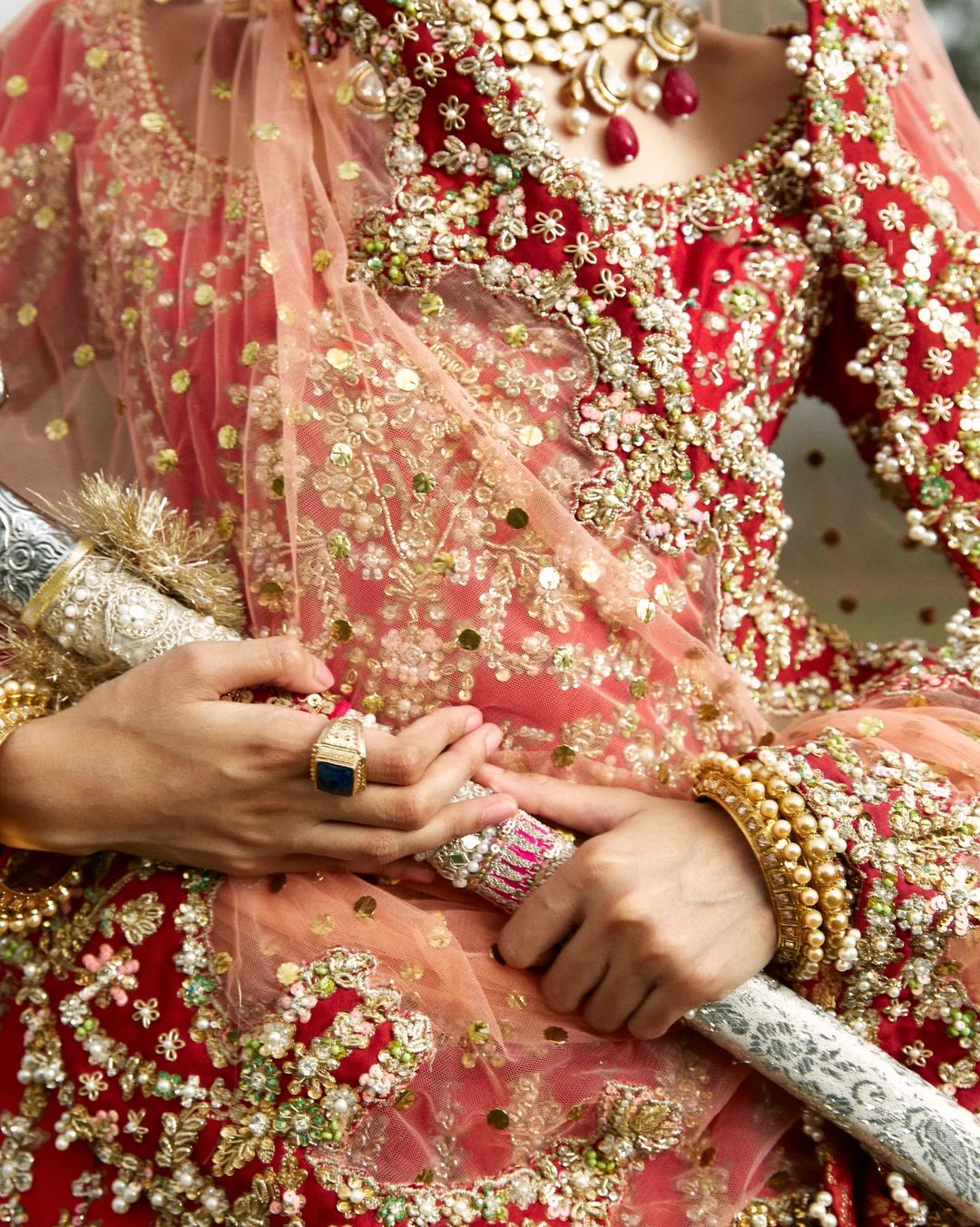 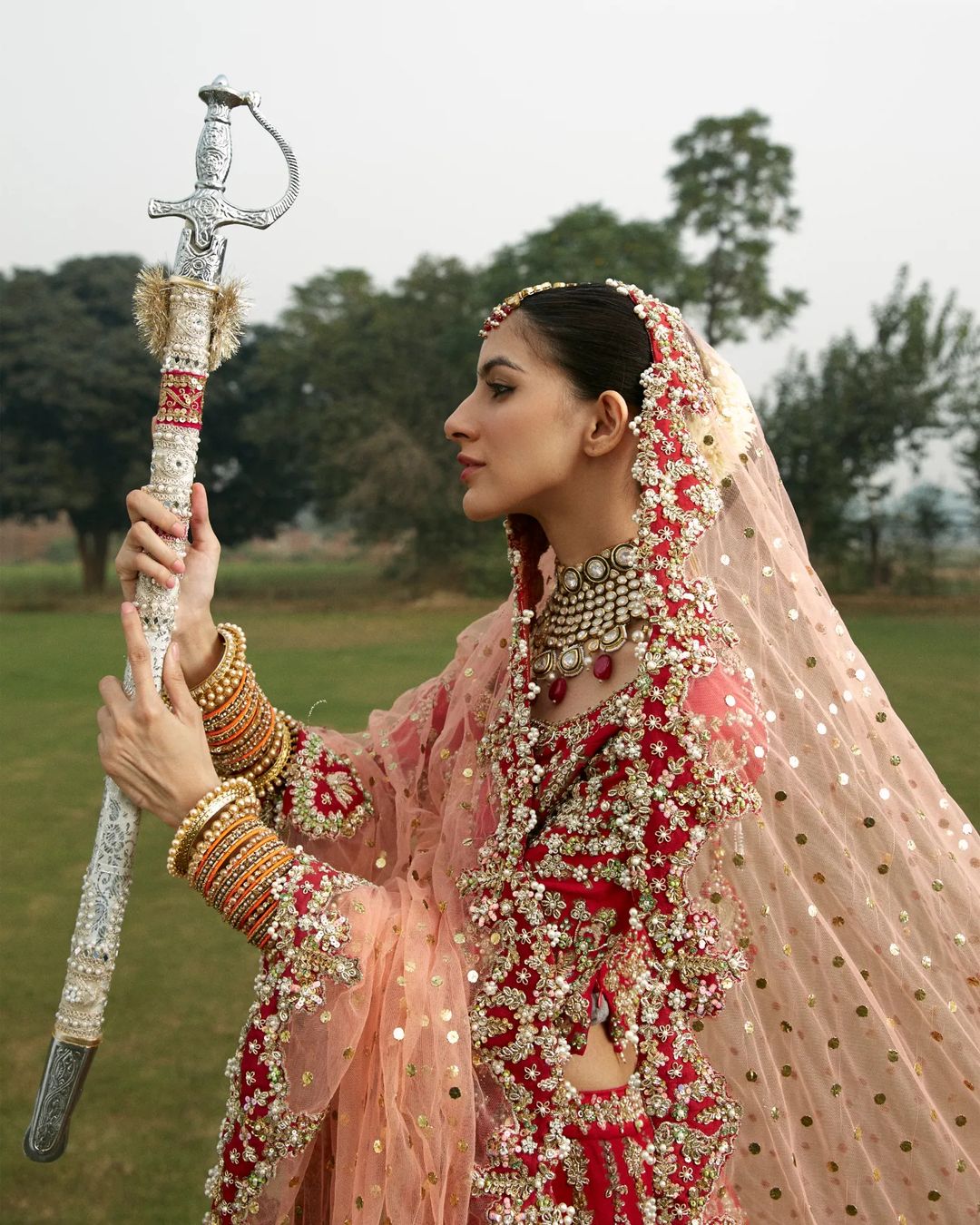 Arab and South Asian grooms traditionally wear swords as part of their attire. Sikh grooms carry a sword (kirpan) on their wedding day to represent the protection of the new wife and their marriage. 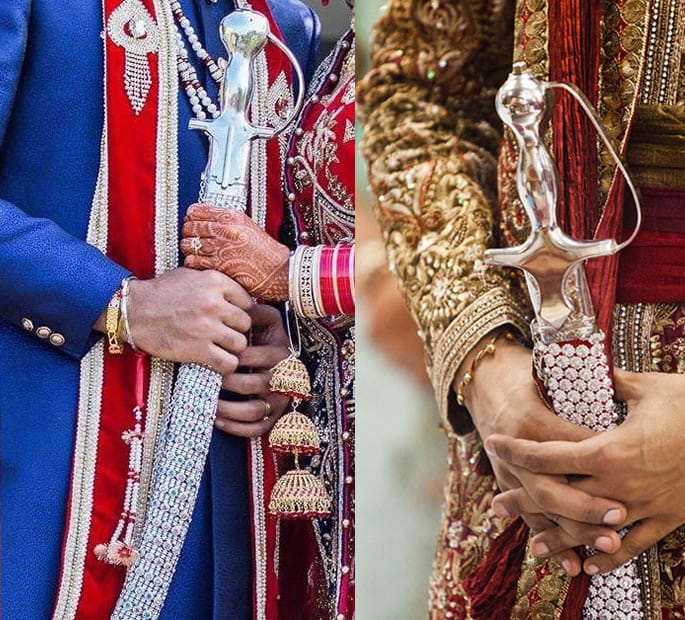 The practice is now widespread in South Asia, and many people in India, Pakistan, and Bangladesh continue to follow this tradition at their weddings, particularly in Indian Punjab and Rajasthan

A red bridal lehenga is one of the most classic and traditional outfits and has not gone out of style despite the trends of fuchsia suits in the 1980s, half-sleeved maroon lehngas in the 1990s, and the beiges, pearly greys, and pastels of the 2010s and 2020s.

Red is the most sacred color in Hinduism and represents the goddess Durga who signifies new beginnings and feminine strength. It also stands for passion and prosperity. Hindu holy men were the first to wear red in the third millennium BC and it became a bridal trend only during the Mughal Era.

Since astrology is so intricately linked to Hinduism, red also symbolizes Mars — the planet that supposedly oversees marriage. However, Muslim brides are believed to have carried the Mughal bridal tradition to modern-day Pakistan where the trend persists in 2022 as well. On the same note, Ali Xeeshan’s new bridal look is for all the brave and feminist brides to steal and make a style statement with for the rest of their lives.