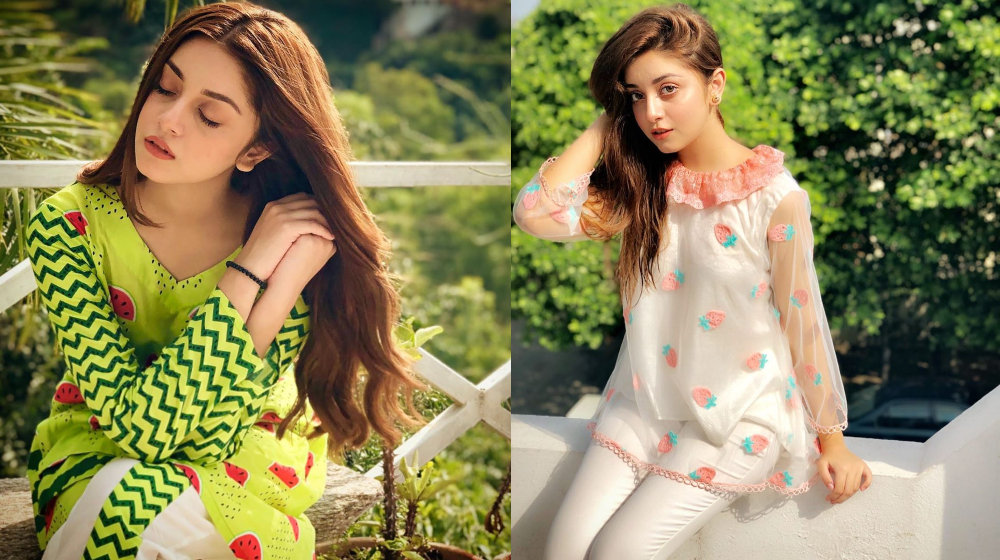 Actress Alizey Shah has been making waves in the biz since her debut in Daldal. Since then she stole the spotlight with supporting roles in Ishq Tamasha and Dil Mom Ka Dia.

The Bisaat-e-Dil actress managed to bag a role alongside Mahira Khan in Superstar. Besides her on-screen conquests, Alizey Shah boasts one million followers on Instagram and plenty of fan pages.

Currently, she’s cast in Hoor Pari on A-Plus. Her Instagram posts are grabbing more attention though. Alizey Shah is bringing in July’s summer heat with an assortment of fruits.

Green seems to be her color this July.

Strawberries anyone? The doll-faced, doe-eyed actress is adorable on her own.

What’s with all the food references? We suppose she likes mustard on corndogs maybe.

Carrying on the corn theme, the actress’ performance in Ishq Tamasha was pretty corny (pun intended). She moved on from ‘bhai phase‘ to best friend and then love blossomed. Hows that for corny? This was the last one (we promise).

Moving on from corn (oops we did it again), the actress opted for a mustard-themed dress.

The Baandi actress also has a liking for mellow neutrals. Unlike her expressions. Those haunting eyes really bear into you whether she’s staring angry daggers at you or rolling out pearly tears.

Whats Next for Alizey?

Alizey will next be seen in Mahira Khan’s Superstar. Shah will be essaying the role of Chutki, Noor’s little sister or cousin.

Meanwhile, Asma Abbas is seen playing the role of a mother figure to both of them. We wonder what the whole family dynamic is there.

While the actress held the limelight in supporting roles in Ishq Tamasha and Dil Mom Ka Dia, will she manage to charm us on the bigger screen? Will the young actress be able to keep up with Mahira Khan and Bilal Ashraf? We hope she does!