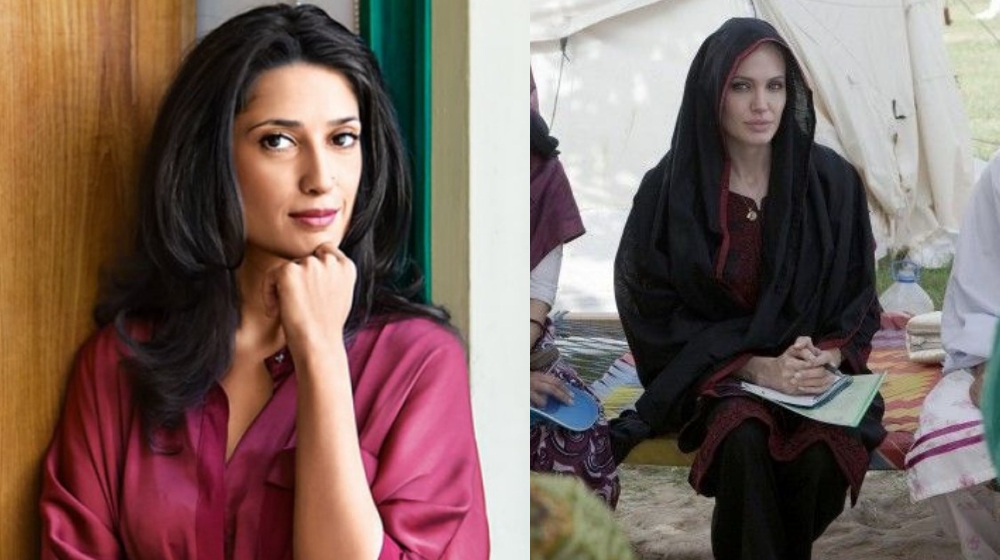 Political activist Fatima Bhutto schooled Angelina Jolie on Afghanistan. She also hopes The Tourist actress will talk about Kashmir and Palestine much like she does about Afghanistan.

The Wanted star made an Instagram account to call attention to the plight of people in Afghanistan. Angelina Jolie intends to raise awareness about the plight in Afghanistan, specifically that of women and young girls following the Taliban’s rapid takeover.

Author Fatima Bhutto didn’t hold back correcting the Salt actress about the plight of Afghan women and girls under foreign military intervention.

“Judging by some leading feminists and actresses, Afghanistan was a paradise until last week.”

Judging by some leading feminsts and actresses, Afghanistan was a paradise until last week. pic.twitter.com/lZg5OpyIrZ

In another tweet, she thanked the Hollywood starlet and asked her to speak up for Palestine next.

“Thanks so much, do Palestine next.”

Thanks so much. Do Palestine next. pic.twitter.com/MHdx0PtNtv

Then going on to highlight the oldest unresolved dispute, Kashmir.

“Has anyone told her about Kashmir.”

(Has anyone told her about Kashmir?) pic.twitter.com/hyhkf5YNj1

The Maleficent star debuted on Instagram with a post about Afghanistan. The post was an image of a hand-written letter Angelina Jolie said was sent from a teenage girl in Afghanistan.

The young girl expressed fear about attending school under the Taliban regime. As per the actress she created her Instagram to be the voice of such women.

“Right now, the people of Afghanistan are losing their ability to communicate on social media and to express themselves freely, … So I’ve come on Instagram to share their stories and the voices of those across the globe who are fighting for their basic human rights.” 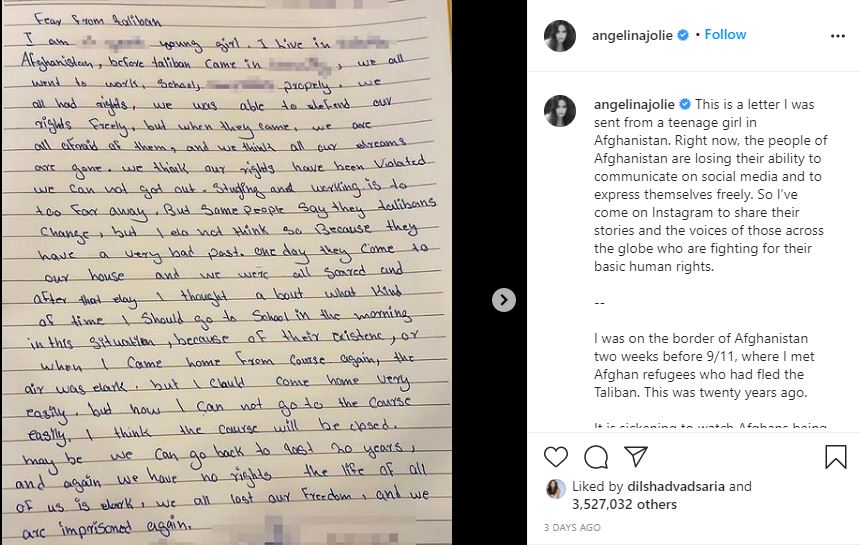 Celebs tend to speak on issues that are trending. However, despite all the recent attention on Palestine, a scarce few in Hollywood spoke up. Most of whom later deleted their tweets and posts.

On the other hand, besides a few South Asian- American stars like Hassan Minhaj, Jameela Jamil, and Riz Ahmed none in Hollywood spoke up for Kashmir.

As a contributing editor for Time Magazine, Angeline Jolie could definitely have used her platform to raise awareness about these conflicts.