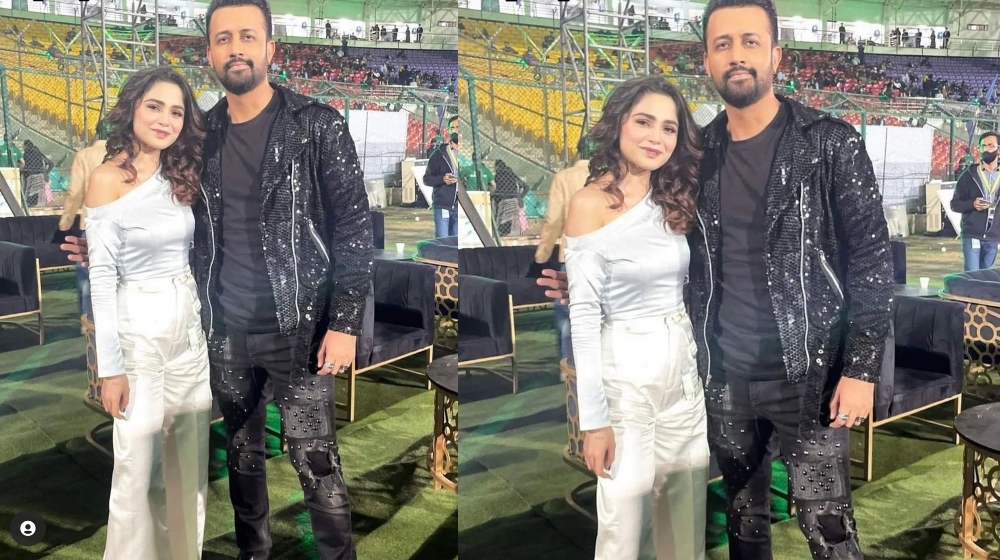 Not only does Atif Aslam have the Internet swooning with his Pakistan Super League (PSL) 7 anthem but also by being the perfect gentleman.

The Rafta Rafta crooner has time and time again proved why he’s the Internet’s favorite celeb. This time the way the singer posed for a picture with Aima Baig has the Pakistani Twitter melting.

Like a true gentleman, rather than placing his hand on the Aatish singer, Atif Aslam opted for the jazz hands move, much like Keanu Reeves.

While most might not even notice the minor detail, this was what most women first noticed.

The now-viral photograph was clicked at the stadium after Atif Aslam and Aima Baig performed the PSL 7 anthem. Clad in a black hoodie and t-shirt the singer somewhat wrapped his arm around Aima Baig for the camera but left his hand suspended carefully not to touch the Kalabaaz Dil singer.

The gesture and move to respect a woman’s space is widely being appreciated by his fans and Netizens alike.

Aima Baig with #AtifAslam
Atif Aslam is a true gentleman, he knows how to respect a girl#PSL7 pic.twitter.com/DltaqWpRPV

Previously Netizens have lauded the 12 Bjey singer for being an exemplary celeb. From steering clear of controversy to the way he treats fans. The vocalist seems to do everything right to keep winning hearts. There’s no surprise his fanbase continues to grow for his conduct not just his hit ballads.