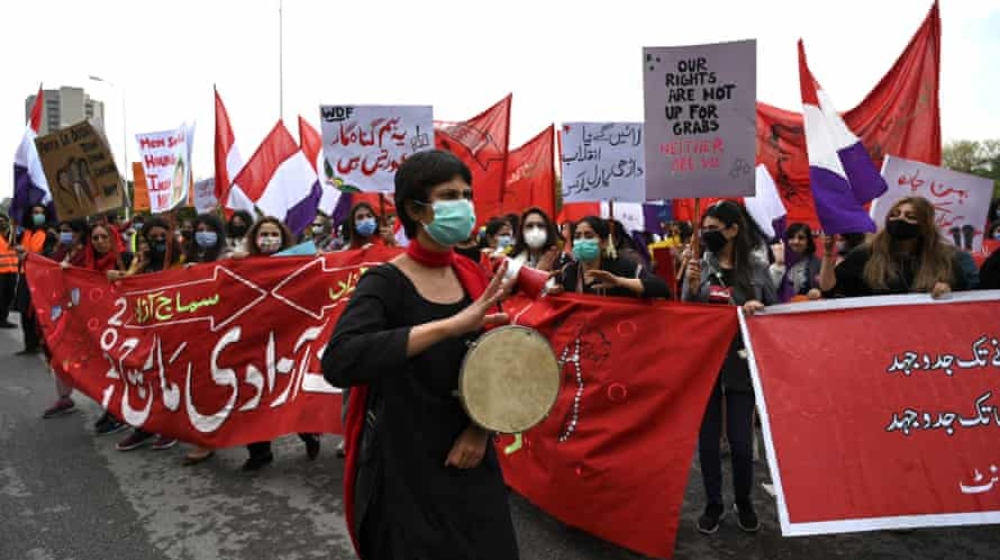 Aurat March became the highlight of this week, as crowds of hundreds took to the roads to commemorate International Women’s Day. Amid viral posters and social media backlash, there was another controversy – Netizens are curious (read: outraged) over spotting what appears to be a French flag at the March.

With this came questions as to why a French flag was waved at a Pakistani women’s march? Of course there were conspiracy theories suggesting explanations from blasphemy to the promotion of homosexuality.

Derive your own meanings out of it!
Song: Price Tag by Jessie J.
#AuratMarch2021 pic.twitter.com/vnBVxAxoft

There were objections as to why there was any mention of France, given their magazine ‘Charlie Hebdo’ and it’s history of blasphemous cartoons.

My mother is watching Neo TV and asking as to why the French flag was waved at Aurat March and why AM disrespected the Prophet. Directly quoting the speaker (Orya Maqbool Jan) and the headlines. The quality of journalism in Pakistan is just amazing.

The theory that the French flag might as well have been the rainbow pride banner is going strong as #homosexuality trends on social media. Denmark is actually the first country in the world to legally recognize and legalized same-sex unions.

France flag was waved in #AuratMarch2021 because france was the first country which has legalized #homosexuality
Shame on these Liberals pic.twitter.com/37IJLy5JVL

Pakistanis are quoting this hadith to spread their homophobic views. I love it how they didn't highlight "patronizing female singers". Are you going to ban female singers as well now? This is why we say #Islam is a curse and it has no place in the 21st century. #Homosexuality pic.twitter.com/DdcweOyMaH

Then there were Netizens that were just there to troll.

Pakistanis: hOmOsExUalItY iS hArAm. YOu aRe gAy yOu gO To hElL

All conspiracies aside, the flag is not even a French flag. As one Twitter user explained, the colors are not right. A French flag places blue with the flag pole followed by white and red, not the opposite.

Pakistanis are pissed with @AuratMarchKHI for waiving #FrenchFlag in the women's march.👏

So if that wasn’t French flag at Aurat March, what was that? The flag is actually for an independent movement, the Women Democratic Front.

So you know how at Aurat March yesterday they were jokingly like “isko France ka jhanda na samjh lein, yay hamari movement ka jhanda hai”? I saw like 3 people talking about we carry the French flag so we’re funded by France. Gotta love the public ☺️☺️☺️☺️

The WDF flag represents grassroots feminism in Pakistan and has nothing to do with the French flag. We, at WDF, stand against all forms of imperialism and the accusation that we would ever wave the flag of a former colonial power is ridiculous. pic.twitter.com/oZIjDB8XGu

Not to mention the French flag is not like waving a Confederate flag.

1)France is not an alien enemy to pakistan, so waving its flag isn't against anyone's sovereignty
2) it wasnt a french flag
3) not all laws are good, the blasphemy law is perfect example, so they should be defied to bring about change

There you go folks, mystery solved. So about those conspiracy theories regarding a ‘French flag at Aurat March’, what do you have to say? Let us know what you think in the comments below