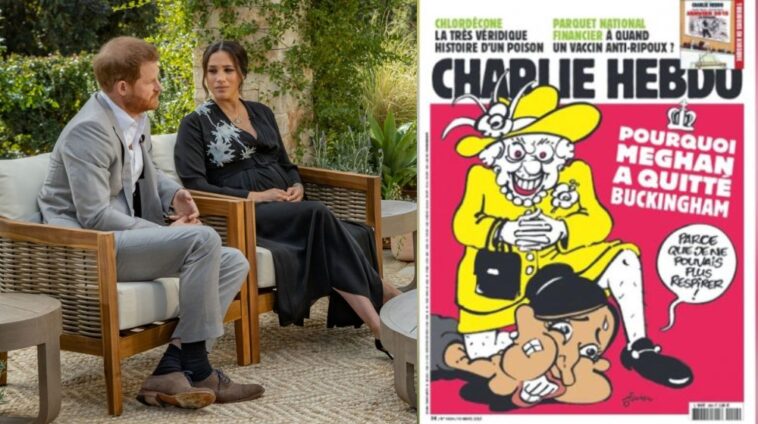 French magazine, Charlie Hebdo is under fire yet again for insensitive caricatures. The satirical magazine depicted a recreation of the George Floyd police violence incident with Meghan Markle and Queen Elizabeth II.

The cartoon depicts Britain’s Queen kneeling on the neck of the Duchess of Sussex, invoking the death of George Floyd. The French magazine released the cartoon following Meghan Markle and Prince Harry’s eye-opening interview with Oprah Winfrey.

Yet the caricature is now garnering widespread backlash online. Because no one is laughing!

For a long time now, the magazine has been bashed for making light of and mocking the struggles of marginalized communities.

#CharlieHebdo, this is wrong on every level. The Queen as #GeorgeFloyd's murderer crushing Meghan's neck? #Meghan saying she's unable to breathe? This doesnt push boundaries, make anyone laugh or challenge #racism. It demeans the issues & causes offence, across the board. pic.twitter.com/ptNXs8RtuS

People shocked that a Charlie Hebdo cover is "offensive."

In other news, the sky is still blue. https://t.co/CnVufRJYW2

Netizens pointed out how the French magazine’s caricatures have been problematic for years. From making light of serious social issues to promoting racism, Islamaphobia, sexism, and xenophobia.

Charlie Hebdo is a disgusting newspaper that promotes Racism, Xenophobia, Islamophobia and sexism. For years it has made fun of many serious social issues that exists in the world, whilst making millions of dollars. We need to call them out for this Bullsh*t. https://t.co/AaliEKcmvV

FUCK YOU AND YOUR DEAD HOMIES.

Back in 2015, the satirical French magazine published blasphemous cartoons of the Muslim Prophet, Muhammad (P.B.U.H).

Meanwhile, the magazine fired one of their cartoonist Maurice Sinet for publishing a cartoon in 2008. A cartoon by him implied that Jean Sarkozy, the son of former president Nicolas Sarkozy, was able to avoid blame for a vehicular accident because he plans to convert to Judaism and marry a rich Jewish woman. The cartoonist asserted repeatedly this was all satirical.

Without wading too much into this Charlie Hebdo debate again, if you have to continually explain that your "satire" isn't racist & isn't punching down, then it isn't very good satire, it doesn't matter which tradition it comes from, French or otherwise.

Creating a culture of hate is terrorism.

Racism is NOT free speech. ITS HATE SPEECH AND TERRORISM!

Netizens spoke out about how the magazine is reprimanded for its problematic political stances except when it comes to anti-Islamic sentiment.

When it was against Islam the world was silent and kept putting up Charlie hebdo pics of the Eiffel Tower in defiance against the Islamic world NOW ITS THIS I WANA SEE WHAT THE WHITE WESTERN WORLD HAS TO SAY ABOUT THIS COVER… U WERE SILENT WEN IT WAS PROPHET THE MOHAMMED “PBUH” pic.twitter.com/8JcZngHY9h

British gammon: Good on Charlie Hebdo for taking the piss out of Islam

also British Gammon: Cahrlie Hebdo have put the queen on their cover. Send in the SAS.

In the interview, the Duke and Duchess of Sussex made startling revelations on racism to mental health in the Palace. The couple said the palace had offered Meghan and Archie inadequate security and protection. With the Suits actress further opening up about mental health struggle and having suicidal thoughts.

Another damning statement against the royal family in an interview included the revelation that the color of Archie’s skin was discussed even before he was born. The couple would not reveal who made the remarks. However, they did say it wasn’t Queen Elizabeth II or her husband, Prince Philip, the Duke of Edinburgh.

Then this week, Prince William denied that the royal family is racist, telling a reporter;

“We’re very much not a racist family.”

Meanwhile, in a statement on behalf of the Queen, Buckingham Palace said that allegations of racism made by the Sussexes were concerning and are being ‘taken very seriously‘. 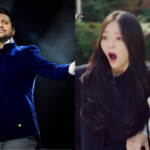 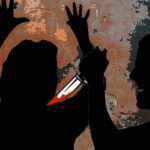