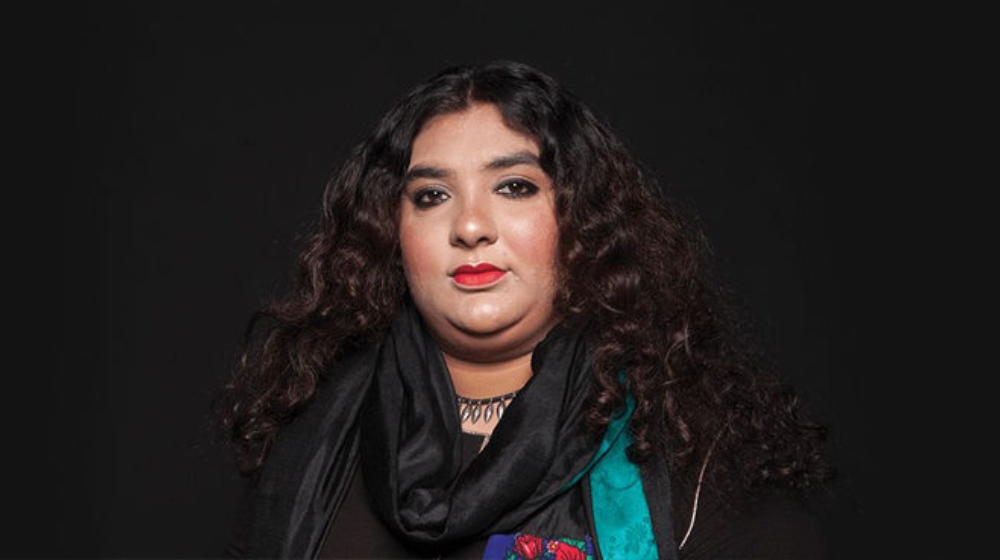 Who doesn’t know the Sufi music maestro Abida Parveen. She’s a household name in Pakistan and abroad. But now it turns out she might have some competition. Right at home. In Gujranwala, there is a ‘junior Abida Parveen‘ and her name is Tahseen Sakina.

The emerging Sufi music sensation from Gujranwala, Tahseen Sakina has already been nicknamed ‘the city’s junior Abida Parveen‘. She even looks the part with her long curly locks and her dressing style.

Besides her powerful vocal range, the Sufi musician also plays guitar and harmonium.

Tahseen comes from a Sufi household in Punjab. Her grandfather and renowned singer Ustad Safdar Hussian was her mentor. She spoke about being trained by her grandfather in an appearance on “Bakhabar Savera“.

“Since the age of four, I performed marsiya, naat and qaseeda.”

Recently she was featured on Nescafe basement’s final season this year. She sang covers of Abida Parveen’s famous folk melodies, Gharoli and Ghoom Charakhra alongside the Baluch Twins.

Tahseen Sakina and her Music Career

While Tahseen Sakina did start performing at the age of four, it wasn’t until 2003 that she started performing professionally.. Since then, she has presented kalam in different languages, including Urdu, Sindhi, Siraiki, Punjabi, and Farsi.

Besides her family, her husband is also supportive of her career. She shared how after her marriage, her husband encouraged her to perform “Heer“.

This led her to participate in a competition happening in her city. Of course, she was triumphant.

“I participated in a competition at Darbar Waris Shah [Muqabla Heer Waris Shah] and won it,”

Junoon is Dedicating Their Comeback Tour to Kashmir

Tehseen Sakina shared she only sung two lines at the competition. That was all it took for her to win.

She had not been expecting the success with people from all over the world showcasing their talent at the prestigious singing competition.

Tahseen Sakina attributes her success to her husband. He supported her throughout her Sufi music journey.

No for the million dollar question – how would Abida Parveen react to seeing this ‘junior version’ of herself? Turns out she gave Tahseen her blessing.

Tahseen said she met Sufi maestro Abida Parveen at a festival in Lahore. There the veteran singer expressed best wishes for her.

“I don’t think I can ever be compared to Abida Parveen jee. For me, she is the sky and there is no one like her,”

Much like her idol, Sakina too is a firm believer of art must come from the heart.

“If the kalam touches an artist’s soul and he understands it, only then it can touch the hearts of the audience.”