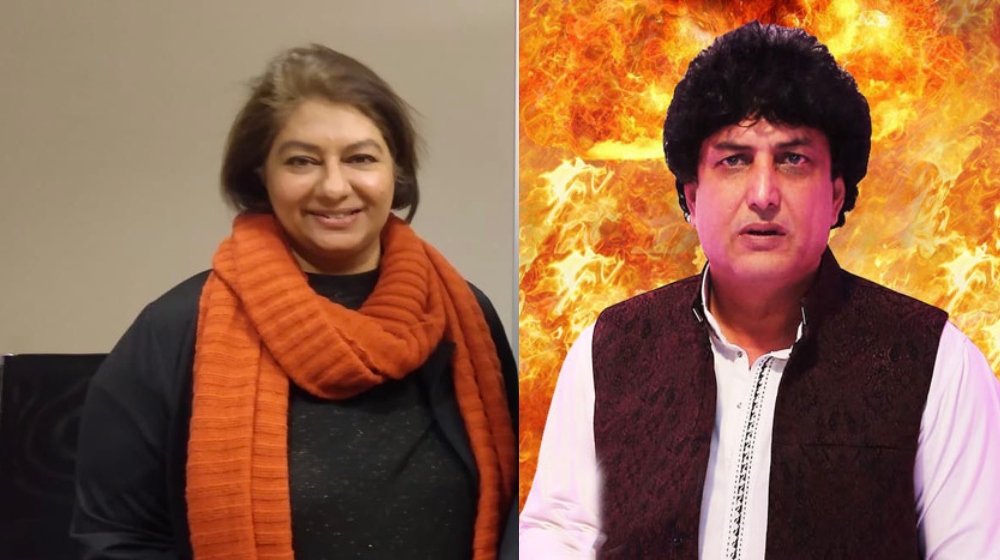 Another day, another epic meltdown on a Pakistani current affairs program. Sometimes a news program can’t help but turn into a soap opera, or worse. Recently, Khalil-ur-Rehman Qamar lost his cool with activist Marvi Sirmed on live television. And now people want to know – why was the controversial playwright on a panel discussing a social issue to begin with?

Amid all this chaos rather than ask the KRQ to leave, Senator Maulana Faiz Muhammad asked Marvi to ‘let the man finish speaking‘.

The show host later stated that she could not condemn the abuse and sexism them and there because she was in shock. Perhaps that may explain her reason to let the show go on.

However, it is pertinent to mention here that it doesn’t make sense to invite someone who doesn’t have expertise on the subject to address women’s issues on live TV.

Its no wonder that Marvi Sirmed and her supporters are now calling for a ban on KRQ.

This is the man who preaches morality and mannerism to women participating #AuratMarch. Just see the true face of anti #AuratMarch crowd. https://t.co/Ign5vl2wrw

There are also calls for PEMRA to step in and ban KRQ.

Wonder why this shitty xxxx wasn't chucked out of the studio just when he opened his filthy mouth? #Pemra ban him from appearing on TV, and act against channel and anchor who let him has his way. @Razarumi @marvisirmed #AuratMarch2020 https://t.co/S1XLoYIKMA

HRCP demands an unconditional public apology from Mr Qamar. HRCP also asks PEMRA to take immediate notice of such behaviour on a TV talk show and penalise those who are responsible.

The journalist community certainly stands with her. Meanwhile, a few celebs also came out to condemn the industry’s ‘star writer’.

The way this so called ‘writer’ shouts at @marvisirmed clearly manifests what he promotes through drama—patriarchy and bigotry. One feels shame that this person is supposedly representing ‘men’. This person must be banned on TV. https://t.co/u4zNveVST0

Mahira Khan expressed concerns about how the writer’s ‘harmless fantasies’ escalated to verbal abuse rather quickly.

I am shocked at what I have just heard and seen!! Sick to the core. This same man who abused a woman on tv is revered and given project after project because of what? We are as much to blame if not more for perpetuating this thinking! #khalilurrehmanqamar

She even encouraged those speaking up for their rights to not stoop to the level of the aggressor.

I personally think it’s imperative that those that stand with the idea of standing up for your rights should write and speak with clarity. A lot gets lost when we try to match jahaaalat with jahaalat, abuse with abuse. There MUST be a difference.

Filmmaker Nabeel Qureshi pointed out how problematic it is to allow this attitude to be projected through television. Not the ‘positive image’ you’re striving for.

This is for you #khalilurrehmanqamar

Unfortunately this kind of people are now writing for tv and their work is popular too this shows our society mentality ! Alarming !
New low !

Ammara Hikmat seconded what Nabeel Qureshi had to say.

Meanwhile, journalist Rabia Anum was even ashamed of how Geo Network recently signed a long-term contract with KRQ

Rabia, Geo also signed a contract with Amir Liaquat after his inflammatory remarks were followed by the murder of two Ahmadis. The truth is commercial considerations override principles.

Simultaneously there are a plethora of men young and old, lauding KRQ for what he did. They obviously fail to understand the legal implications of the issue.

Sirmed’s supporters are taking the legal route in all this and are signing a petition.

I signed it because I can't tolerate this person who is a misogynist. He should not be allowed to be part of any media network when he can't respect women. His abusive language with @marvisirmed sirmed is unacceptable#bycottkhalilurrehmanqamar https://t.co/eJYeRInp53 via @Change