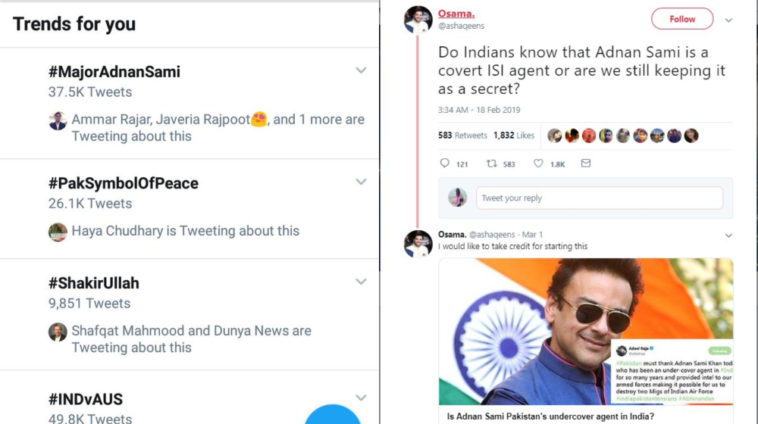 Over the weekend, #MajorAdnanSami became the hottest Twitter trend. All this came as a reaction to the Pakistani-cum-Indian singer Adnan Sami’s undying and unnecessarily vocal support for the Indian Air Force post-Balakot incident.

While Indians thought it was a good day to see the former Pakistani singer support them, Pakistanis took it as a the perfect opportunity to turn the tables on him. All day long, Pakistanis went out of the way to reveal that Sami is a spy from the ISI.

What most of us don’t know is that one man single-handedly started this Twitter exposé.

Do Indians know that Adnan Sami is a covert ISI agent or are we still keeping it as a secret?

Following @ashaqeen’s lead, fellow Pakistanis decided to elevate their meme game to the highest level. What followed was a meme fest.

Here are some of the most astonishingly creative memes that depict Adnan Sami as an undercover ISI operative.

Major Still Working under many leaders …
Our pride #MajorAdnanSami pic.twitter.com/2GiuR4ojYN

#MajorAdnanSami sir we as a nation are proud of you and we salute what you’ve done for us. I assure you when you come back we’ll sing your song to you (hum bhi tu hain tumhare, deevane ho tumhare 🎶🎶) . 🤪

Don’t mess with the best, fellas.

#MajorAdnanSami
Is the best ISI agent.
In the agency pic.twitter.com/R6DJk32jup

What’s sad is that we didn’t even get his rank right. Yeah he’s been promoted post-Balakot airstrike. Good job, soldier.

This man even broke down the complex codes for secret message delivery. Sami is a smooth operator, risking it all by sharing messages out in the open.

Now #MajorAdnanSami has "Bloacked" some pakistani journalists. But actually he is giving ISI a clear signal with this move!
If we decode "Blocked"
B=Bharat
Lock= Lock indicates "Lacks"
Ed= indicates Education.
Therefore he signals ISI that Indians r uneducated Jaahils. 😆

I am sorry @AdnanSamiLive but i have to do this.
Here's the proof video of Adnan Sami being an ISI agent!#AdnanSami #MajorAdnanSami #ISI pic.twitter.com/sXCRTzO4AU

A secret conversation with adnan sami #MajorAdnanSami only you can understand pic.twitter.com/tpheDSLiaV

Oh No! Our agent has been compromised. Is that why we sent back Abhinandan? As a truce to keep Sami safe?

Me when everyone on Twitter are exposing our ISI agent major adnan sami. #MajorAdnanSami #ADNANSAMIISIAGENT pic.twitter.com/09W1G0ej07

At least Pakistan is doing its part to keep Sami safe.

Here we go again, another agent down because we spilled the tea.

Now that Maj. Adnan Sami has been exposed due to our negligence, but please don't tell them about Commander Tarek Fateh, he is doing a tremendous job there.#CommanderTarekFateh#MajorAdnanSami pic.twitter.com/fnobhpnTUW

Back to the guy who started it all:

4 people that made Pakistanis extremely proud this week. pic.twitter.com/wGUXLNvEHb

He even ditched the hashtag along the way because now we know where to go when looking for an ‘Adnan Sami is an ISI agent’ meme.

Lets take a moment to credit the guy behind it all:

I would like to take credit for starting thishttps://t.co/7aQC2d4vmZ 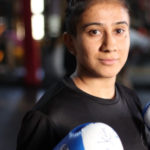 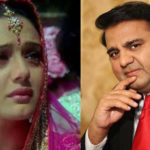