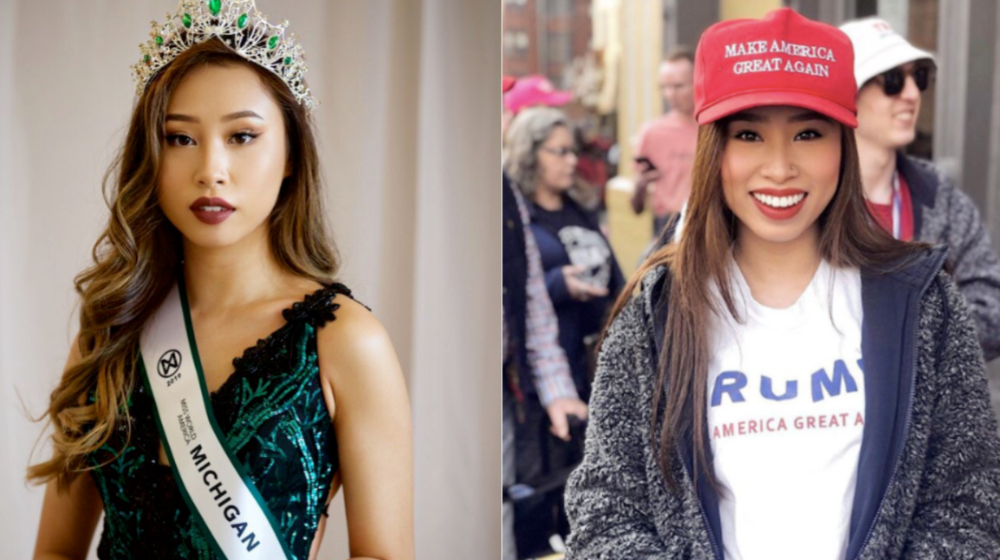 Miss Michigan Kathy Zhu has been stripped of her title and crown over racist social media posts (another one canceled). The worst part is that the Asian-American pageant queen defended her Islamophobic and racist comments on social media.

After her award was taken away by Miss World America (MWA), she posted an email she received from them over Twitter. The former Miss Michigan Kathy Zhu will have to:

Director of the Michigan state pageant, Laurie DeJack, informed Kathy Zhu that she was being dismissed because her ‘social media accounts contain offensive, insensitive and inappropriate content.‘

Laurie DeJack made it clear that the racist and Islamophobic tweets made by Zhu violate MWA policy.

MWA’s Rules and Conditions, specifically the contestant requirement of ‘being of good character and whose background is not likely to bring into disrepute Miss World America or any person associated with the organization.’

Almost everyone other than Kathy Zhu can see what’s wrong with such comments. She even tried to justify her remarks by saying her tweet about police violence against black people and #BlackLivesMatter was taken out of context.

To make matters worse, she says that ‘the left thinks statistics are racist‘. That does sound like a Trump supporter to us (spoiler alert: she is one).

Miss Michigan Kathy Zhu was recently stripped of her title over several offensive tweets. She is defending her posts criticizing a ‘try a hijab on’ booth at her college and another post in which she responded to a tweet about Black Lives Matter and officer-involved shootings pic.twitter.com/ifaQfCGo7M

The part about her tweets being based on her statistics really doesn’t make sense. She’s not even a researcher or statistician to say the least. She even bashed MWA by suggesting that ‘we should be empowering women’s voices‘ rather than stripping women of their title. That is one woman card that didn’t play right with anyone.

“Everything I’ve posted was my statistics and my opinion.”

Back in 2017, Kathy Zhu made insensitive remarks about police violence and murders of black people. While research proves that these are racist hate crimes, Kathy doesn’t think so. Instead, she responded with ‘majority of black deaths are caused by other blacks‘.

She didn’t stop here, going on to say:

“Fix problems within your own community first before blaming others”

If you thought that was the only thing Zhu did wrong, think again.

In 2018, the University of Central Florida celebrated World Hijab Day with ‘try a hijab on’ booth,  The event was aimed at boosting inclusivity and understanding.

She rubbished the whole event by saying that World Hijab Day was all about ‘trying to get women to being oppressed under Islam‘.

“There’s a ‘try a hijab on’ booth at my college campus,” she wrote. “So you’re telling me that it’s now just a fashion accessory and not a religious thing? Or are you just trying to get women used to being oppressed under Islam.”

Kathy Zhu never graduated from the University of Central Florida and later transferred to the University of Michigan. She refused to apologize for her offensive remarks. However, Kathy removed the Facebook post.