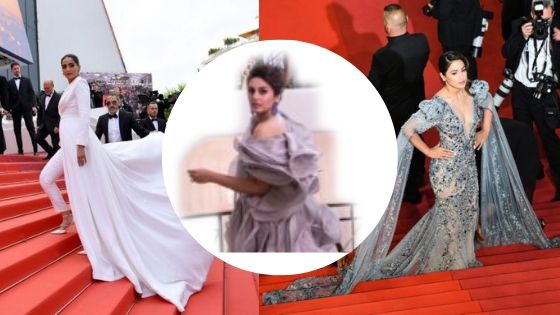 While plenty of Bollywood celebrities littered the red carpet at the Cannes Film Festival, they didn’t have a single movie screening this year.

If they keep this up, extravagant attire is all that Bollywood will be known for at Cannes. This isn’t just an instance at the 72nd edition of Cannes Festival de Film.

In the past, Indian movies would bag accolades at Cannes. However, it’s been years since any Indian film made it to the festival line-up.

1,845 feature films were submitted for the official selection this year. While Pakistan’s Wakhri, Rani and Blood Money made it, not a single Indian movie made the cut.

Previously, two Pakistani short films have been selected for Cannes. This includes Masters of the Sky in 2014, and What a Waste! in 2016. As well as documentary Bhit Shah Ja Faqeer in 2018.

Bollywood is a huge industry. Last year alone they churned out more than 1,800 films. That’s more movies than any other country has ever produced in a year.

While Bollywood mass produces commercial films, most of the content is not Cannes quality. Indian actress Huma Qureshi, affirmed this while talking to AFP.

“The kind of films that come to Cannes are very niche in India, because it’s not the quintessential Bollywood film.”

Qureshi explained that Bollywood is focused on big-budget hits. Independent and art-house films don’t have the traction at home that they have at festivals like Cannes, Venice, Berlin, etc.

“We’re so obsessed with box office numbers that it will be a long time before that will really change.”

Born to a Muslim family in New Delhi, the actress is known to take on moving roles. She will soon make her Netflix debut with a dystopian film about a mother looking for her lost child.

“I don’t think we have the budgets or the willingness for people to actually invest in these kinds of films. We are still more interested in making the quintessential Bollywood film — that’s essentially where the market is right now.”